Two Women Who Broke The Glass Ceiling In Dalsinghsarai, Bihar 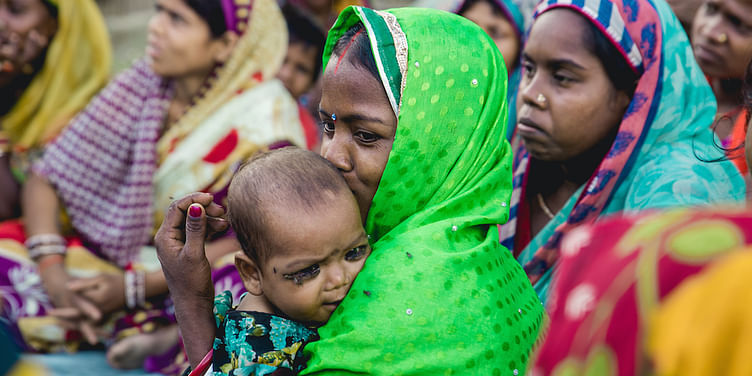 Uttara, an India Fellow writes about her stint in rural Bihar where she stumbled upon numerous striking stories - positive, negative and inspiring. Amongst them all, the stories of these two women – Kumkum Devi and Mona Kumari have been intriguing and have stayed with me.

My stint in Dalsinghsarai, Bihar has made me stumble upon numerous striking stories. Some were positive, some negative and others inspiring. Amongst them all, the stories of these two women – Kumkum Devi and Mona Kumari have been intriguing and have stayed with me. These women give voluntary support to Innovators In Health, the organization I’m working with, under their maternal and new born health care program.

They belong to a greater group of active women who support the maternal and new born health care program at the organisation. They not only give pre-natal and post-natal counselling to  pregnant women here but also in case of emergencies, fill the gaps in the public health system by taking women in need to the nearest health facility. With a spirit of commitment towards their community, they even extend their help in organizing and mobilizing women for our community engagement meetings. They have had the finesse to navigate through inhibitions and roadblocks. Below is a collection of snippets that signify important landmarks of their life and made them who they are today, as individuals.

Kumkum Devi and her new found definition of support

“When support is what you have yearned for ages, giving it to these women in my community in whatever capacity I can, makes me believe in the word and its meaning”, said a 38 year old Kumkum Devi. Her father died in an accident when she was just 11. The incident came as a blow to her where she was left with her three sisters, a brother and her mother. Being the eldest child in the family she was married off soon after father’s death. Young Kumkum tried to find support in her husband, mother-in-law, and others in her new family, only to realize that she wouldn’t find it there.

Her husband has been an alcoholic. He knew almost nothing about the family and household. From doing the daily chores to taking care of her sisters at her home in Rampur-Jalalpur, everything helped her establish an identity for herself. Over the years, she even got her sisters and two of her own daughters married. Meanwhile, her son had died. After narrating all these landmark incidents in her life, she said, “I, for most of my life, have lived a life of misery. But that hasn’t stopped me from patting my back every now and then.” A sparkling confidence reflected through Kumkum’s eyes.

She even confessed that her confidence has grown manifolds over time as she managed to build her own house and is now also educating her third daughter. Initially, she did not give much importance to educating girls and hence, had gotten two of them married, but after becoming a volunteer with Innovators In Health, she realized the value in being educated. In a certain way, her desires that were buried when her father passed away got planted in her youngest daughter, who is currently studying in 7th standard.

“I want my daughter to be able to support herself and have the agility, ability and strength to cope up with anything that comes her way. Yes, it’s important to learn with experiences but it’s equally important to be prepared”, says Kumkum.

Today, when she looks back at the years spent in trying to seek support from people, she realizes that she had it within herself. As a part of an active voluntary service for her community, she wishes to support the women in deliveries and facilitates in case of any knowledge gap. With a heavy heart, she describes the times when there was no hospital (her reason for having delivered her 7 children at home) in the sub-district. “I distinctly remember that the district hospital came up when I delivered my last child. It’s my belief that people in my community can be given the knowledge for accessing these basic facilities. I want to prevent home deliveries. Hospitals can save lives, be it the mother’s or the child’s!” she said with a lot of zeal. Kumkum Devi is indeed a woman that many in her community look up to, and has been constantly applauded for her selfless and committed work.

Mona is a 25-year old woman, married for last eight years. Born and brought up in Delhi, the first fifteen years of her life were much easier and simpler, be it in terms of education or friendships or even exposure to the world outside. In her family though, she never opened up too much about her friendships and school life. “No one was aware of the life I shared with my friends, the conversations we had, the incidents that happened, etc. Though, all this came to a halt once my parents decided to get me married at the age of 15. I wanted to study further but they convinced me into getting married with false promises of higher education.” A disheartened Mona was left to the mercy of her husband and in-laws. She voiced her interest in studying and even registered for 11th standard but all in vain. “My husband always listened to his mother. Once my mother-in-law says ‘No’ for anything, I am barely heard.”

Mona had her first child three years after getting married. Her husband works in Delhi. “Whenever, I ask him to take me along, he claims that the cost of living is too much for him to afford both of us. Plus, he also has a DJ business here which often results in him coming over to Dalsinghsarai frequently, especially during the wedding season.” Dissatisfied, Mona has been living away from Delhi. She has visited the city only thrice in last eight years.

“My life completely changed the moment I changed my base location from Delhi to Dalsinghsarai. During the first few months I did not even talk to people at my in-laws and in the community, since I didn’t know the language. Later, I managed to adapt to not just the language but also the culture and lifestyle, that was distant to me, initially. With time, I have now grown out of my complaining nature, but yes, I shall always live with the regret of not being able to fight enough for my education.”

Mona has struggled and fought to make decisions for herself, be it her education or even the number of children. “I always wanted to have just two kids. I bore my family two boys, and to my utter surprise, they wanted a girl after two of them. My mother-in-law did not approve of Tubectomy. Now, I have a third boy and she still disagrees to get me operated. I shall make sure that I get it done when my mother comes to Dalsinghsarai. I would prefer having three kids over five, even though that seems like a burden to me right now.”

Irrespective of all the dejection and opposition, Mona tries to grab any opportunity that comes her way which is precisely the reason she chose to voluntarily support our organisation. She has attended all the community meetings that take place and also gained a lot of knowledge that helped her improve her health too, for her recent pregnancy. In all the transient clouds of her life, Mona is able to find her silver lining by trying her level best to establish her agency in whatever way possible. Her life is indeed an inspiration to all of us.

About the Author: Uttara S. is an India Fellow, who was placed with Innovators In Health, Bihar as a part of her fellowship. She continues to work there, supporting the program team for maternal and neonatal healthcare. India Fellow applications are open now. Know more and apply here.