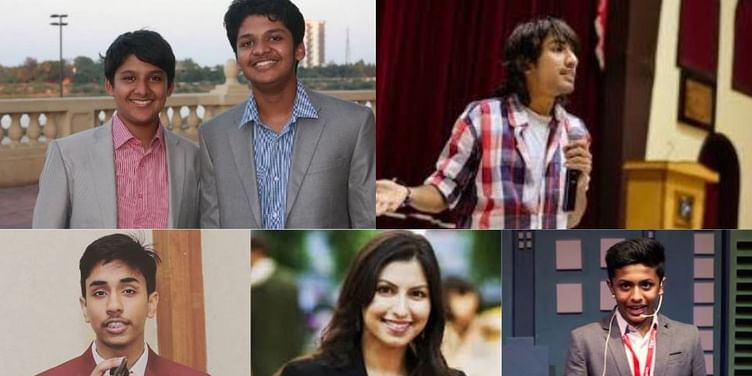 In the last decade, India has experienced a vast change in the success ratio of Young Entrepreneurs. Today, people who know how to use resources wisely can do wonders with their lives. I have seen people from India itself, who are an inspiring personality to other students and are Risk Takers at such young age.

When lot of children in India are busy in playing mobile and video games, few are planning huge ventures for their future. Some are playing and others are planning businesses, attending meetings and now after those sleepless nights, they are the source of inspiration for many.

Today, we are going to talk about 5 such young influencers who have created history in their respective fields. After reading this article, you will realise that you only need to search for your talent and rest will be done by never quitting your job.

These two brothers are tycoon in mobile app development business. A 15 year old boy Shravan and his 14 year old sibling Sanjay are running a company since 2012 ungrudgingly. They have been recognised as Youngest Developers in India and in world. The duo have been making mobile applications for both Android as well as IOS.

Apart from their app making skills, the brothers have created or designed their own Virtual Reality Device known as GoVR. With increasing number of Startups in India, there is a tremendous growth of investors in India s well. Most of the investors are ready to invest on the ideas of the duo.

Siddharth is a very well known speaker and entrepreneur in India. When children are busy in playing games, Siddharth along with his few friends was organising competitions for the students and were busy in selling their products and tickets. He is one of the most renowned personality known for his philosophy and his ideas.

In 10 standard, he launched his first magazine FRIENDZ and he has been featured in Top 25 young entrepreneurs of the world in 2010. This college dropout is now a TEDx Speaker, Motivational Speaker, Entrepreneur and designer.

Dipanshu is a very well known young Ethical Hacker and Cyber security Expert. He is currently India's Youngest Cyber security Author and at age of 15, he is a Google Certified IT Specialist. When children of his age were busy in playing mobile games, this young boy was hacking those games and web applications. His book "The Hacking Dimension" has been foreword by Top third cyber security lawyer Mr. Pavan Duggal.

His major sports is startups, Yes, just at the age of 13, he launched his venture and was offered a job of being senior content writer at electronics lovers(an IT Based firm). Dipanshu has provided cyber security to most of the big leading departments for free and has reported critical vulnerabilities to Indian Government websites.

He was the only one who hacked into the database of one of the top institution of India that is Indian Institute Of Foreign Trade(IIFT) and reported the bug without any delay to secure their servers.

At 15, he is a TEDx speaker, he is providing workshops in Government Departments and is now helping cyber victims for free of cost. He is the founder of THE CYBER AGENTS and is currently CEO at his own company which provides online services such as website development, AI bot development, web penetration testing. Dipanshu has been featured in ore than 40 national news portals and is an inspiration for the young tech geeks. He is a renowned Digital Marketer, Ethical Hacker, Cyber security expert.

Kavita is herself the source of inspiration and motivation for all the young budding scientists. She is the founder and CEO of FRESHGLOW.CO and has invented FreshGlow paper. This young lady is four patents holder and is the youngest woman ever to receive the biennial INDEX Design to Improve Life Award – the world’s largest prize for design.

She has been featured in Forbes 30 under 30 and Time Magazine as well. Her invention "Freshpaper" is now widely used by farmers and harvesters all across the globe. Her concern about environment and food is now a great source of inspiration for this new era. The innovative lady has a huge contribution in reducing the amount of food waste generated.

Who does not know this young boy from Mumbai. A child prodigy who is running his own company of "Papers N parcels". At the tender age of 13, this gentleman is a business man, entrepreneur, TEDx speaker and a tycoon in successful businesses.

The idea started when he wanted a few books from another end of the city urgently. His father came home tired after a day's work, and so he could not ask him and there was nowhere to go.

This is where the idea of having a startup dedicated to carrying papers and small parcels within the Mumbai for assured intra-day delivery struck Tilak. A boy from a city of dreams, has successfully carried on with his passion and built a huge empire.