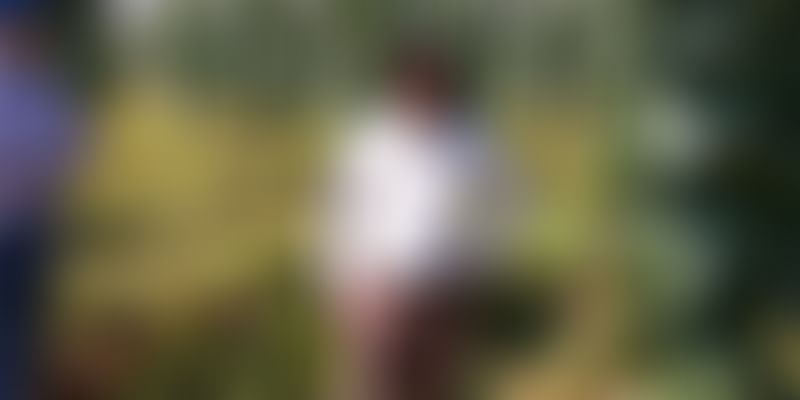 Here’s how Hosachiguru started farming in a 30-acre land to spread across 800 acres capturing 18 projects in just five years.

After working in the IT sector for over a decade, Ashok J and Sriram Chitlur were planning for their retirement goals in their mid-30s. They were on a lookout for an opportunity to make a difference while remaining connected to nature.

In 2008, they were curious about starting sandalwood cultivation after the government's move to liberalise it.

They began searching for land and travelled to rural communities on weekends to procure it. After two years of toil, they acquired land and began cultivation of sandalwood in Rayadurg, Andhra Pradesh.

In an interaction with SMBStory, Srinath Setty (37) who joined the duo in 2014 to direct their sales and customer support, says,

“Ashok and Sriram love nature. Earlier, when they were thinking for their retirement they caught hold of farming as a great opportunity. They not only wanted to grow more trees, but also help those who wanted to enter into farming.”

Ashok (55) and Sriram (44) began their journey by investing a total of Rs 1 crore from their savings. The seeds were sown in Ashok’s ancestral property in 30 acres land and they began with the plantation of sandalwood.

“Both of them were working full-time jobs and they didn’t have time to make frequent visits to the farmland and so they decided to hit on growing sandalwood that has a gestation period of about 15 years.”

Longer gestation also has higher returns, Srinath says. Besides, there are many other challenges involved with plantation of other crops like the suitability of the soil, fertilizers, and more. The duo wanted to play safe because they had a sustainable plan, he adds.

They even got a government grant of Rs 40 lakh for modern farming in India and they purchased a private nursery for sandalwood.

Though things were running smooth, they lacked a proper direction on how they can help people contribute to nature.

After around five years, they chanced upon an idea. They thought of setting up a farmland management company that acquires large land parcels and concerts them into flourishing farms. Timber trees and other sub-tropical crops of the landowners’ choice are cultivated thereby achieving long-term wealth creation or passive income in the most sustainable way.

In 2013, after they learnt about farming techniques, they formalised the company Hosachiguru, which means new sprout in Kannada. This was the time when Srinath joined them in the team.

Hosachiguru believes in focusing on agro-forestry, and there are two ways individuals can engage with them. Firstly, people who want to purchase farmland can buy from Hosachiguru with the options of developing on their own or with the help of the company. Secondly, individuals can also go for development and management of existing farmland (provided it has a scale of 50+ acres and the landowner is willing to bring in the resources to set up a commercially viable agro-forestry project.)

The idea became prominent among the people and in just five years, Hosachiguru captured 18 projects spread across 800 acres of farmlands of sandalwood, mahogany, and melia dubia. The company clocks a turnover of Rs 20 crore annually.

Hosachiguru sells the land for about Rs 60-Rs 65 per sqft and their projects get sold within three-four months of buying the land or even before they set up the basic infrastructure, Srinath claims. The major share of the project comprises Hosachiguru managing the farmlands for their customers.

The company also maintain a small ticket size resulting in a significant chunk of the initial sales from a project coming from the existing customers.

“This is the biggest achievement. They started from cultivation in one piece of land but now their company manages 18 projects spread across 800 acres of timber. They have come a long way in a short period,” Srinath says.

The company has farmlands out of which they are already selling melia dubia to a trader in Mysuru who is into plywood manufacturing.

The founders are also particular that the lands are located close to Bengaluru and intend to expand operations to areas such as Hyderabad and Hosur shortly. They have raised funding from Prestige Group’s CEO Venkat Narayan.

Sharing the revenue model details, Srinath says that they have four revenue models. First, they sell lands with the entire set up. Seconds, they generate revenue selling sapling grown out of their nursery. Third, they set up the plantation for people who own farms and charge a project execution fee. And lastly, they charge for ongoing operations and maintenance. This essentially covers all costs included. As a success fee, they take 30 percent of the produce.

Going digital in this internet world, Hosachiguru uses digital media to share information on various initiatives and offerings to their customers. The company has placed a strong asset management platform that provides constant updates on the activities at the farm.

Weather stations, moisture sensors, and state of the art drip irrigation and automation systems are installed at all the farms to analyse and take appropriate action on the various aspects of farming.

With their various projects, Hosachiguru effectively contributes to removing atmospheric carbon. It helps improve soil health by following organic practices and flora and fauna. The company also contribute to groundwater recharging and has over 10 different operations that help in doing this.

Besides, Hosachiguru has also created jobs for over 100 local farmers. The company has also provided accommodation to the family members of these farmers.

One of the main challenges in farming is the expectation of landowners in terms of returns, says Srinath.

“If there is one thing that farming teaches us, it is ‘patience’ and cannot be compared to an investment in the stock market or gold. Traditionally, farmlands have appreciated much higher than stocks or gold. However, the farming output and the yields from farming have always had ups and downs. We also don’t subscribe to the idea of just buying farmland for the sake of appreciation and believe that it is one’s duty to plant trees and offset the carbon footprint. Trees are no doubt valuable, but they need time to grow, he adds.”

Another challenge is in acquiring large parcels of land and maintaining costs. Unless the company has a scalable land, the setup and maintenance costs cannot be lowered.

The farming business is about going back to basics, about being associated with nature and the environment. It is capital intensive and the cycles are long for many to enter. The founders also notice that a good number of people enter agriculture driven by passion. Hence, they are not savvy with numbers and quickly fall into a cash trap.

Realtors with deep pockets wishing to enter this space are not excited with the numbers due to the long gestation period. The returns on capital are not attractive, unlike the typical urban projects. Again for those passionate types, financial management is a challenge and most people are stuck with one or two projects.

At Hosachiguru, it is a simple business model and that is to stay away from debt.

The company claims to have kept its overheads minimal and bulk of the incentive lies in the produce that comes from the trees they grow. This ensures they are able to work on thin margins and deliver good value to their customers when they buy land or manage it for customers. Lower margins help the customers get a better upside quickly while it helps Hosachiguru to scale quickly.

“With Hosachiguru, individuals can aspire to own this asset while ensuring it adds to his/her lifestyle and long-term needs. We are working towards making ownership as easy as possible while ensuring it’s also easily saleable when the customers need funds.”

Their upcoming project is Abhivrudhi Farms on the state highway of Hindpur, a 90-minute drive from Bengaluru. The project is 108 acres of planned wilderness enriched with 5000 mango trees. Abhivrudhi will offer a host of facilities to ensure residents (farm owners) connect with nature, including weekend homes and cottages, pre-installed hammocks, cycling tracks, reading pods, observation decks, and multi-level camping facilities.

'I advise businesses to gather all help from govt before starting a venture,’ says Sujayraj of ...