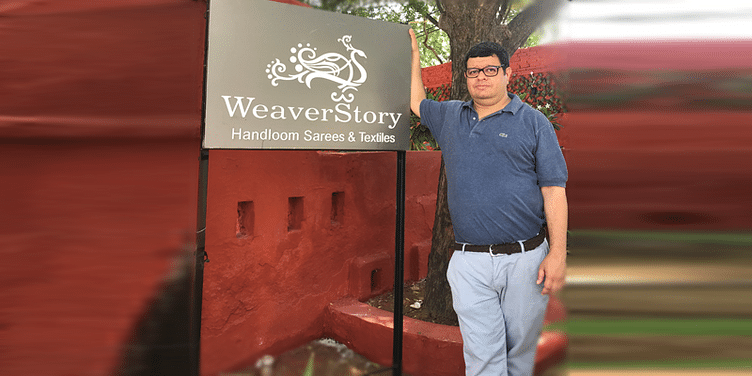 WeaverStory.com began by selling five sarees a month. The company now has monthly sales of 300 pieces and clocks a turnover of approximately Rs 5-6 crore every year.

India has always been known for its handloom industry. It is the second largest creator of employment in the unorganised sector, after agriculture. The sector, which engages 43 lakh people, is suffering from many gaps.

This reality caught the attention of Nishant Malhotra, a banker, when he was sitting in one of the corporate towers of Mumbai, away from his family in Delhi. With over 16 years of experience in the banking and finance sector, he now wanted to do something on his own and return to his family in Delhi.

He says, “In the autumn of 2015, while visiting Benaras, I came across a master weaver who was on the verge of quitting his ancestral profession. In their tiny home in Varanasi town, he and his brothers had forever seen their father bent over the loom, churning out lustrous Banarasi silk sarees. It was a skill he loved. But he was not earning enough. When we saw women craving authentic handlooms on social media, we realised there was a gap in demand and supply.”

Nishant decided to help these weavers in reaching out to the end buyers. Instead of joining the fintech business, which usually is an obvious path for bankers and financiers today, Nishant knew what he wanted to do. He founded ﻿WeaverStory﻿ on August 7, 2015, on National Handloom Day.

Two things drove Nishant to take this road. He says, “One, I wanted to do something that I could do very effectively from Delhi. Two, when I met some people in Benaras, I realised there was a lot of potential in helping weavers and creating economic viability for them.”

Weaving a journey of change

In today’s time when marketing of a product plays a significant role in determining the success of the business, Indian weavers have no idea how to market their talent, skill sets, and works. The fact that they are not tech-savvy led Nishant to launch WeaverStory.com to bring their works to the world.

He says, “We leveraged the power of social media and connected with three lakh people on Facebook to showcase the work of these weavers.”

This allowed weavers to continue to manufacture products and not worry about marketing.

The second gap was that weavers were directionless and operating mostly from their comfort zones. WeaverStory interacted with customers, understood their needs, and helped weavers to make inroads into new territories.

Trying to weave Baluchari sarees is one instance. In addition, giving customers varied choices, like the colour in which they wanted the cloth to be woven, turned out to be a win-win for both, weavers and customers.

The biggest reason for the downturn of the sector, according to Nishant, is that weavers are not compensated well - a problem that WeaverStory is trying to address.

Initially, dealing with the “weaver’s mindset” and convincing them about the process was a challenge. Nishant says the first few years are also tough in terms of returns, adding that a lot of time and effort goes into keeping the production going.

But, the hard work paid off. WeaverStory, which started by selling five sarees, now has 50-60 handlooms in Benares. It has changed the life of 75 households by providing them with economic stability and sustainability, and eliminating uncertainty from their lives.

WeaverStory clocks a turnover of approximately between Rs 5 and 6 crore per annum every year.

Nishant takes credit for spreading awareness about handlooms in the online space. The sarees, suits, blouses and suit pieces are priced between Rs 3,500 and run into lakhs. “Customers have become more receptive to buying handloom online. We have a repeat customer rate of more than 35 percent.”

Why WeaverStory? Nishant says, “Weavers always have a story to tell. Like why he chose a particular colour. Why was a saree not in green or pink but in red or blue?”

Nishant says more than 95 percent of the workforce involved in the handloom business in Benares is men. He says though women are indirectly involved as looms are set up in their homes, they do not work on the looms as the men in the family don’t approve of them interacting with outsiders.

Despite great progress and advancements, the sexism remains unchanged.

A lot of planning is needed to ensure that the startup stays on the path to success.

Nishant says everything has to be planned well in advance. “Whatever I need to produce next year, I need to start designing now. From materials to designs, we plan everything in advance.”

The business, which has a flagship store in Delhi, plans to expand in the coming years. They are also looking at increasing their offering to maheshwaris, patolas and chanderis.

“We are encouraging many new designers willing to create something new with woven garments and also include handwork like zardosi,” Nishant says.