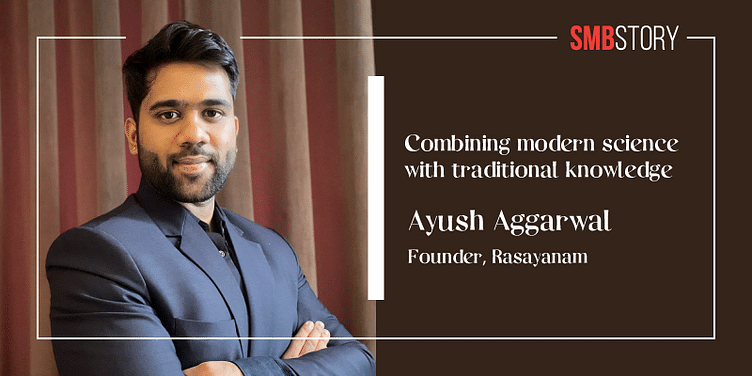 Rasayanam is a Faridabad-based Ayurveda company founded by Ayush Aggarwal. It manufactures and sells products such as Nano-curcumin, Kashmiri saffron, Ajwa dates, Ashwagandha, and more.

Ayurveda, which was once considered a “sunrise sector”, has today entered people’s daily vocabulary. Until a few years ago, the market only had a handful of prominent names such as Baidyanath, Patanjali, Emami, and Hamdard, but today, the scenario seems to be changing.

Not only are more entrepreneurs curious to explore this space but the vast potential in this market also compelled the Indian government to establish the AYUSH (Ayurveda, Yoga, Naturopathy, Unani, Siddha, Sowa-Rigpa and Homoeopathy) Ministry to promote Ayurveda and traditional medicines.

Launched in February 2020 by Ayush Aggarwal, Faridabad-based ﻿Rasayanam﻿ is an Ayurveda company that is navigating its way into this market.

In a conversation with SMBStory, Ayush recalls that though he was working in a high-paying job in Canada before 2020, the urge to start something of his own made him restless. He found Ayurveda an interesting opportunity to explore his entrepreneurial dreams. He started work to launch a company that made Ayurveda products while also pursuing his full-time job, however, he quit two months later and returned to India.

“I was not very happy with the products which were being sold in India so I started doing my own market research, and even went to the Himalayas to explore the roots of Ayurveda,” he says.

So, Ayush invested Rs 30 lakh from his savings to start Rasayanam, which is bootstrapped to date with no plans to raise funding anytime soon.

Rasayanam’s first product was Shilajit resin, which Ayush says is made from shilajit extracted from the Gilgit mountain range situated in the Himalayas, and it took about a year’s research to develop it. “Long considered a panacea in Ayurveda, shilajit is widely known to improve immunity and balance metabolism,” he explains.

Gradually, the company rolled out other products such as Kashmiri saffron, Ajwa dates, Ashwagandha, Nano-curcumin, and more.

Ayush says that Nano-curcumin is one of Rasayanam’s USPs, and represents a combination of modern science and traditional knowledge.

Curcumin is the principal active compound in turmeric and gives turmeric its antioxidant properties. “We use nanotechnology to extract pure curcumin, which makes it water-soluble and easy for the body to absorb,” Ayush explains.

The products are priced between Rs 500-Rs 3,000, and the founder mentions that the pricing strategy was decided by keeping the prices offered by competitors in mind. The company clocks Rs 45 lakh revenue per month, Ayush claims.

Ayush also expresses confidence that high pricing will not be a deterrent for consumers to buy the products because the quality they are providing is better than its competitors.

Strategies to stand out

Ayush says he is aware that this market has now become “deadly competitive.” He further adds that the company’s focus is on generating content to communicate the intent and vision of the brand to its potential customers and target audience.

“Education has been the biggest issue. Since there are so many brands in the market, people are confused about what to buy,” he says, adding that the content produced by Rasayanam’s team conveys information about the products, including their utility, benefits, and more.

“It is essential for us that the customer understands the product and its benefits before buying,” he adds.

Rasayanam operates on a D2C (direct-to-consumer) strategy and sells through its website as well as ecommerce platforms such as Amazon and Flipkart.

Ayush also points out that while Delhi and Mumbai are its main markets, the brand gets a lot of demand from cities and small towns in Uttar Pradesh, Bihar, Arunachal Pradesh, etc. He also adds that the company also plans to sell its products through doctors and premium ayurvedic stores.

As people have become more conscious about their health amid the pandemic, the crisis has played a major role in accelerating the awareness around Ayurvedic products and bolstered their adoption. Ayush claims that the company is growing at a rate of 20 percent per month this year, and is projecting a 90 percent growth in revenues in this fiscal year.

To ensure sustained growth, the brand is collaborating with doctors to understand the health issues that plague people and develop Ayurvedic solutions to solve them. The next product line by Rasayanam will focus on solving digestive problems.

“We are in no hurry to launch products one after another because our focus is quality. And that requires time,” he concludes.