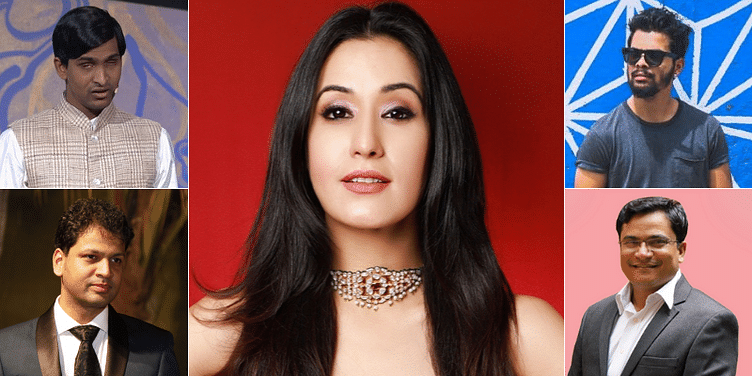 Meet these 10 small and medium business entrepreneurs who overcame their bleak economic situations to become successful.

Some of the world's wealthiest entrepreneurs were born dirt poor. Walmart Founder Samuel Walton, WhatsApp Co-founder Jan Koum, Carnegie Steel Founder Andrew Carnegie, and many other global billionaires started out with next to nothing.

India also boasts of many entrepreneurs who were born poor and struggled against the odds for several years to look like an overnight success.

Arguably the most famous rags-to-riches story in India is of a young Dhirubhai Ambani who used to sell fried snacks in his village to make ends meet. The Reliance Industries founder's story is a fitting testament to the notion that hope, courage, and perseverance matters more than how much money an individual is born into.

SMBStory has curated a list of 10 small and medium business entrepreneurs who overcame their bleak economic situations to become successful:

Forced to sell bags on Mumbai streets after his father lost everything in a stockbroking scam, Tushar Jain didn't lose hope. Tushar and his father completely transformed their small bag company into a large seller of school bags, college bags, duffle bags, business and laptop cases, and more.

Under Tushar’s leadership, the business was named High Spirit Commercial Ventures in 2012. The bootstrapped company experienced a meteoric rise in popularity and became India’s fourth largest maker and seller of backpacks and luggage.

"We have emerged as the largest brand in the Indian backpack segment by selling seven million bags last year," says Tushar.

The Rs 250-crore revenue company now has its headquarters in Mumbai and 10 regional offices spread across India, covering every district of the country.

Bhavesh Bhatia was not born blind, but had little vision while growing up. Born with retina muscular deterioration, he always knew that his sight would only get worse with time. But when, at 23, his eyes finally decided to give up on him, no amount of preparation could have predicted the gloom that was to come.

He was working as a hotel manager and scrambling to save money for his mother’s treatment, who was suffering from cancer. However, he lost his mother, and after setting up a candle business, Bhavesh used to painstakingly set aside Rs 25 a day to purchase wax for the next day’s candle stock.

Today, Sunrise Candles uses 25 tonnes of wax a day to manufacture their 9000 designs of plain, scented, and aromatherapy candles. They purchase their wax from the UK. Their clients are Reliance Industries, Ranbaxy, Big Bazar, Naroda Industries, and Rotary Club, to name a few.

Bhavesh is also a gifted sportsman and manages to devote enough time to hone his abilities professionally.

In 2007, 11-year-old Sid Naidu from Bengaluru lost his father. To support his family, he started distributing newspapers before going to school. He earned Rs 250 per month. However, the financial situation at home remained grim.

Naidu’s dream of entering the fashion industry and becoming a model seemed even more far-fetched at this point. After completing Class 10, Naidu started working as an office boy, earning a meagre sum of Rs 3,000 per month.

After 10 years, in 2017, he finally decided to become an entrepreneur and leverage the network of fashion industry stakeholders he had slowly built. He launched Sid Productions, a venture which dabbles in fashion shoots, model grooming, art direction, print ads, TV commercials, and more.

"Myntra is my biggest client, but I also work with Future Group's fashion brands such as Scullers, Jealous 21, Indigo Nation, etc. I also work with Lifestyle and Max. They started hiring me for fashion shoots, store launches and influencer events. I am good at propping and set design, and made my mark with my clients," he says.

In just a year, Naidu's business boomed and recorded a turnover of around Rs 1.3 crore. Sid Naidu is now targeting a turnover of Rs 3 crore.

Chinu Kala was 15 years old when she fled her home in Mumbai due to issues in the family. The young girl was then staring at a bleak and uncertain future.

"When I left my house, I didn’t know what lay ahead for me. I could earn only Rs 20 a day selling knives and coasters door-to-door, and people used to slam the door on my face, refusing to buy the products. But I had the determination and I knew there is no substitute for hard work,” Chinu says.

Struggling hard to make it on her own, Chinu had to survive on one meal a day. But the teen had big dreams in her head and stars in her eyes. This propelled her to never give up, even when things seemed hopeless.

In 2014, she decided to start Rubans Accessories by combining her love for fashion and experience of corporate merchandising.

Rubans Accessories was started with a bootstrapped capital of Rs 3 lakh in a 70 sqft Kiosk in Phoenix Mall, Bengaluru. In 2019, within a span of five years, she led the company to a turnover of Rs 7.5 crore.

School dropout Muniswamy Daniel was a driver before he decided to start his own business. “I was drawing Rs 6,000 a month as a private driver,” he says. He gave up his job after he would be called to work even on a Sunday. “I could not miss church on Sundays and since there was no alternative I quit my job,” he adds with a smile.

At that time, Daniel’s brother was running an electrical shop in New Thippasandra, Bengaluru. “My brother was planning to shut that and he suggested that I start a tea shop,” Daniel says.

So when Daniel started his first tea stall in 2007, it was literally on a wing and a prayer. Today, his tea business, Sharon Tea, has a dedicated clientele, and in the past six months, it has expanded to three branches in Bengaluru.

He sells upwards of 1,000 cups in a day at his first branch. The second store that started a couple of months ago near BDA Indiranagar sells over 500 cups daily, and the newly-launched branch at the ITC factory has started to record 200 cups in a day.

Renuka Aradhya was born poor and would beg alongside his pujari father after conducting religious ceremony. But for a long time, Renuka wanted to build his own travel/transport company. After working a score of different jobs over the years, he managed to buy a few cars.

A company called Indian City Taxi was on a distress sale, but he did not have any knowledge of merger and acquisition, just paisa de do, company le lo. He bought that company in 2006 with Rs 6.5 lakh and ran it under the name 'Pravasi Cabs'. "I had to sell all the cars that I had by then to produce this money," he says.

On the back of many years of toil, Renuka's business grew exponentially and escaped from being impacted by Ola and Uber because he had around 700 cabs attached to the business. Renuka also landed his first client, Amazon India, when it was setting up its Chennai office. He also landed Walmart, Akamai, General Motors, and more.

His company today has a turnover of Rs 30 crore and employs 150 people.

When Srikant Bolla was born, neighbours in the village suggested that his parents smother him. It was better than the pain they would have to go through their lifetime, some said. He is a “useless” baby without eyes… being born blind is a sin, others added.

Twenty-three years later, Srikanth is standing tall living by his conviction that if the “world looks at me and says, ‘Srikanth, you can do nothing,’ I look back at the world and say I can do anything.”

Srikanth is the Founder and CEO of Hyderabad-based Bollant Industries, an organisation that employs uneducated and disabled employees to manufacture eco-friendly, disposable consumer packaging solutions, which is worth Rs 50 crores.

He considers himself the luckiest man alive, not because he is now a millionaire, but because his uneducated parents, who earned Rs 20,000 a year, did not heed any of the 'advice' they received and raised him with love and affection. “They are the richest people I know,” says Srikanth.

At 17, Raja Nayak, the son of Dalit migrants from a village in Karnataka, ran away from home. Like millions before him, he wanted to escape the punishing life that poverty inflicts on its victims.

"I had realised as a young boy that it was very hard for my parents to send me and my four siblings to school. My father did not have a steady income and my mother had little to make ends meet often pawning whatever little valuables she had,” he says.

The penny dropped when Raja was loitering with his neighbourhood friends and was persuaded to watch a Hindi movie. It was the 1978 film, ‘Trishul’, where a penniless Amitabh Bachchan eventually goes on to become a real estate baron.

Inspired by this story, he decided to become an entrepreneur. Today, Raja has a total turnover of Rs 60 crore from his various enterprises that include MCS Logistics, an international shipping and logistics business, Akshay Enterprises that’s into corrugated packaging, Jala Beverages that manufactures packaged drinking water, and Purple Haze that is in the wellness space with three beauty salon-and-spa centres in Bengaluru.

Zaheer Gabajiwala was running a toy workshop in a small, abandoned lift shaft in the 1980s. The entrepreneur did not have enough money to rent a regular working space in the building. For raw materials, he had to convince people to sell to him on credit. It was certainly a bleak situation, but Gabajiwala didn't give up.

“When I was just 10 years old, I was roped into the operations of the company by my father. This was my first job and after school, I would be at the factory joining the other workers in the production line,” his son Moiz recalls.

Beating struggles with immense hardwork, shedding sweat and tears, the father slowly built his workshop into a Rs 15-crore business employing 100 people, now known as Zephyr Toymakers. It is currently one of India’s largest indigenous toy manufacturing companies and the products are mainly construction sets with focus on STEM (Science, Technology, Engineering, and Math) Education.

Moiz Gabajiwala became the CEO of the company in 2014. He led the development and operations for a chain of retail outlets to showcase high-end educational toys from European companies.

Although Sandip Patil holds a doctorate degree in Chemical Engineering, he was raised in a small mud house in his village.

With barely literate parents who worked as labourers, Sandip had a rough childhood. “There were days when the whole family, including my two younger siblings, would go without meals. Despite the abject living conditions, I dreamt of studying," he says.

After his uncle helped steer him on the path to education, Sandip eventually found his calling. After completing a few individual projects and taking some business advice from friends, Sandip launched E-Spin in 2010, with the help of the SIDBI Incubation and Innovation Centre (SIIC) at IIT Kanpur.

“I was happy to get into the research and development of high quality, low-cost nano-fibre units, and these have a wide range of applications,” he says. At the moment, E-Spin’s clients include major research labs in India and it has an annual turnover of Rs 2.2 crore.