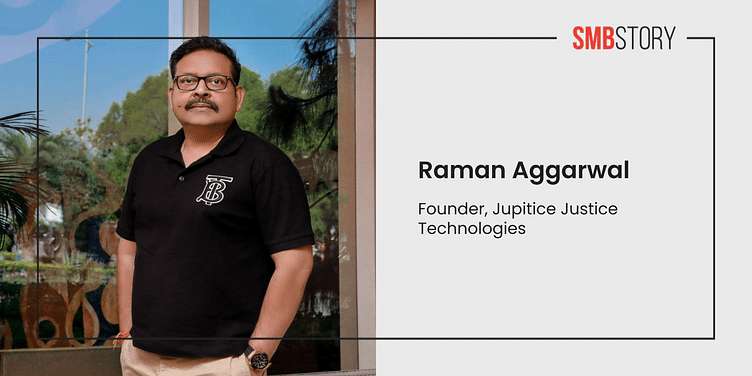 Delayed and non-payment of MSME dues is a grave concern. To solve this, Jupitice has developed a private digital court to swiftly resolve MSME payment issues within 90 days.

The problem of delayed payments among micro, small, and medium enterprises (MSMEs) is a grave concern. Reports suggest that MSMEs have submitted nearly one lakh applications in the last four years stating the non-clearance of their dues. It puts the financial health of these businesses at stake, which still need a lot of support from government institutions to come out of the traditionally-running shell.

Though the government has been urging the central and state departments, PSUs, and others to clear MSME dues within 45 days of receiving goods through its MSME Delayed Payment Portal - MSME Samadhaan, the problem has only aggravated.

To resolve these issues, Raman Aggarwal started MSME Digital Court under Jupitice Justice Technologies in September 2021, one of the first ‘private digital courts’ for the private justice system, which is offering an out-of-the-court settlement, but in a digital way.

He says the issue is not just about payment delays, but also about non-payment by the parties. There is an addressable solution to a delayed payment, but what if the party is in a denial mode? In both cases, it gives rise to a dispute, which again has to follow a formal procedure of filing a complaint and running a case in the court by law, which takes a lot of time.

For this, Raman has developed one of India’s first digital courts to swiftly resolve the rising disputes among small to mid-level businesses and help with civil and commercial disputes through the private justice delivery mechanism.

He says, “The MSME digital court developed by ﻿Jupitice﻿ is determined to help SME owners to resolve commercial disputes through various ADR Mechanism i.e. arbitration, conciliation, and mediation, among others.”

In an interaction with SMBStory, Raman speaks about how he is aiming to enhance the liquidity of MSMEs through Jupitice by providing fast, cost-effective, and efficient dispute resolution through its Online Dispute Resolution (ODR) platform. He also talks about how he has been working towards reducing the litigation rate and consequently reducing the burden on the judiciary/ public justice system.

SMBStory (SMBS): What is the major problem that Jupitice’s MSME Digital Court is looking to solve?

Raman Aggarwal (RA): Lack of working capital is one of the major issues faced by startup owners in the country. Since MSMEs don’t have sufficient security to offer to the bank in exchange of raising an alternate capital, they continue to work with their limited capital. Now, in case of any dispute, the entire capital is bound to get blocked. Therefore, it is imperative that MSMEs have speedy justice given the long time taken in litigation courts.

Keeping the facts in mind, Jupitice announced one of the first MSME Digital Courts. The AI-driven platform will resolve disputes that include civil, commercial, personal, consumers, etc. under the Private Justice System.

Normally, it takes over seven years to resolve a dispute regarding MSMEs. However, Jupitice’s MSME Digital Court is developed in such a manner that we promise the MSMEs that their disputes will take not more than 90 days to be resolved.

SMBS: How is Jupitice different from MSME Samadhaan?

On the contrary, Jupitice’s MSME Digital Court has a 360 degree approach towards resolving MSME disputes. While MSME Samadhaan only deals with delayed payments, which is mostly undisputed money, some of the other kinds of disputes or disputed amounts is a grey area that the government is yet to deal with. That is where the Jupitice MSME Digital Court comes as a relief for MSMEs.

Jupitice MSME Digital Court registers cases relating to delayed payments by the buyer, and also files disputes between vendors and MSMEs, MSMEs and Large Businesses, and MSMEs-Buyers (Delayed Payments), among others.

Secondly, to file a case on MSME Samadhaan, MSMEs should have registered with the Ministry of MSME and should also have a valid Udyog Aadhaar Number and Udyam Registration Number. This criteria often excludes many small businesses who haven’t registered with the ministry. One of the other major differences is the speedy disposal of disputes as Jupitice takes up to 90 days to resolve a dispute and MSME Samadhaan takes around 15 days for assigning the council itself.

SMBS: What happens with the non-compliance of verdict by any of the parties?

RA: There can be instances when one of the parties does not comply with the verdict. In this case, there are two ways - compliance and enforcement.

For compliance, under the Arbitration and Conciliation Act 1996, the parties have to comply with

the award given by the arbitrator. But if this doesn’t happen, then there is ‘enforcement’, where  if one of the parties fails to comply with the orders of the arbitrator, then the order can be filed at the jurisdictional court, and further, the court will enforce the order through the police or other designated officials.

SMBS: What has been the biggest challenge so far, and what are you aiming for?

RA: The biggest challenge the company is facing is the lack of awareness among people regarding the private justice system. It has been close to a month since we launched the  MSME Digital Court, and we came to an understanding that not many people are aware of the out-of-the-court settlement. Every day, we receive dozens of calls from SME owners on our helpline number and none of them have any idea how to quickly resolve their disputes.

Jupitice understands that capital plays an important role in any small or large business, thus, guiding more and more business owners about the idea of the private justice system is our first and foremost priority.