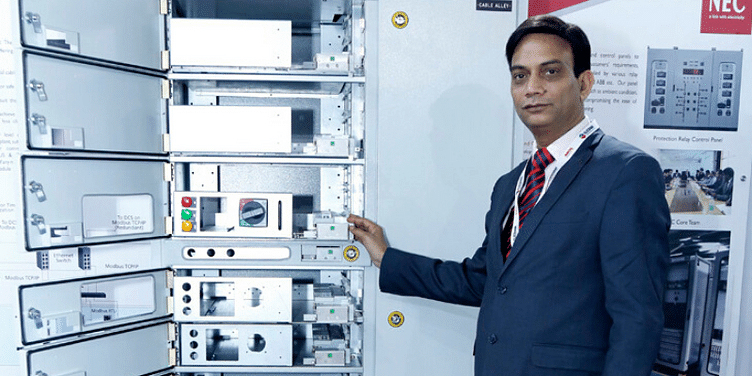 Nitya Electrocontrols (NEC) was started in Noida in 2002 by Prashant Srivastava. He built the company into an electrical equipment vendor for real estate, power, petrochemical and telecommunications industries, as well as for state electricity and power generation boards.

When most of his friends and peers were busy figuring out what to do with their lives, a young Prashant already knew that he wanted to be in the electrical equipment industry. More specifically, he wanted to manufacture high-quality electrical controls and goods that ensured the safety of consumers in homes, offices, and other buildings.

“From an early age, I developed a keen interest in the working of complex electrical equipment. I started to research and experiment and wanted to take my interest to a new level. I developed a dream to set up a manufacturing project and used my research for making different kinds of innovative electrical control products,” Prashant tells SMBStory.

Prashant realised that, to begin with, he needed formal education in the sector. He studied electrical engineering in Pune, and after completing his bachelor’s, he was ready to start his entrepreneurial journey by making panels for electric switchboards.

An electric switchboard is made of one or more panels, each of which comprises switches for the redirection of electricity.

“In 2002, I saw a huge demand for electrical panels and switchboards due to a boom in infrastructure development in India. I felt Noida would be a better bet than Pune. So, I moved there and set up a manufacturing unit for electrical panels. It was completely self-funded,” Prashant says.

At first, the fledgling business found it difficult to get orders. Rather than spending big on marketing, Prashant decided to focus more on R&D to ensure his products were of high quality and affordable. He also started making switchgears, motor control centres, and bus ducts.

The strategy worked. Orders started coming in from not only real estate developers but also large private companies in the power, petrochemical and telecommunications industries. NEC then became a registered vendor for state electricity and power generation boards.

“Becoming a vendor for multiple sectors ensured all our eggs were not in one basket. Whenever the real estate industry suffers a slowdown, we get affected. But the slump does not affect our orders from government organisations and the private sector. This diversification helps us overcome the downfalls of the real estate sector,” Prashant says.

Presently, NEC is clocking a turnover of Rs 150 and has around 200 employees. The business now has three manufacturing units across Noida and Greater Noida.

The first manufacturing facility is a 2,200 square feet unit which makes switchgears, including low-voltage, high-tension and medium-voltage panels. It has a monthly manufacturing capacity of over 600 vertical panels.

“We are accredited with ISO 9001‐2015 and ISO 14001-2015 certification for quality and environment management systems. The electrical equipment made by us across the three units is designed and manufactured with state-of-the-art technology. The entire range is type tested at CPRI/ERDA/third party labs as per the latest national and international standards,” Prashant says.

NEC exports its products to Bangladesh, Sri Lanka, Nepal, and some countries in the Middle East. Prashant identifies Control & Switchgear, Tricolite, and Adlec as competitors, and says NEC’s quality products and affordable prices make for close competition with these companies.

As the number of electronic gadgets and other use cases for electricity continued to increase, Prashant realised that the demand for electrical safety in households mirrored this growth.

To meet this demand coming from the consumer segment, and also to stay ahead of the curve, NEC started making wires and cables to reach end-users directly. NEC began making different types of wires and cables to meet the functional needs of a range of consumers.

NEC is also coming up with various kinds of modular switches in the consumer segment, and plans to invest Rs 200 crore in the next five years to fund this effort. “This also helps promote the Make in India vision. Our investments in this consumer segment will generate multiple employment opportunities and ensure environmental protection through the use of clean and green energy,” Prashant says.

Prashant says he will now focus on marketing. He says he has a marketing plan ready, and adds that NEC has already started leveraging social media channels and its website to reach out to more consumers.