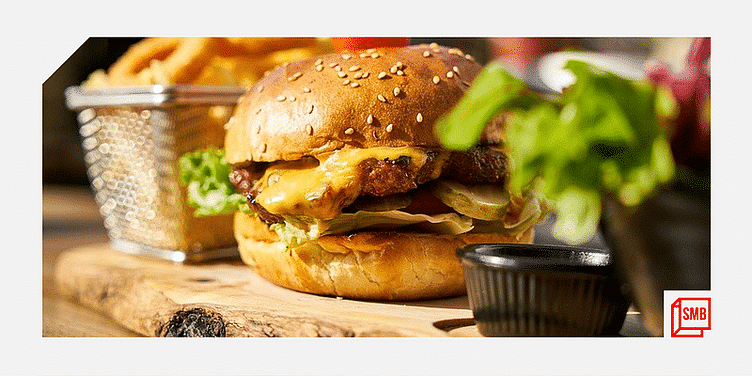 The last decade has seen numerous domestic players in the FMCG (fast-moving consumer goods) and QSR (quick-service restaurant) space coming up with innovative brands that are at par with the international ones.

From McDonald's to Burger King, international brands, in the last two decades, brought a new trend of eating burgers in cafes or in a setup that eventually came to be known as quick-service restaurants (QSR). These brands have dominated the Indian fast food segment for years.

Today, neighbourhoods across India have several Indian brands making a splash in the fast-food market. Apart from burgers, India has also given birth to the domestic rival of Dunkin Donuts in the form of Mad Over Donuts.

It was difficult for Kabir Jeet Singh to make ends meet when he was pursuing his MBA at the Birmingham Business School in 2007. And, what does a desi do in pardes to meet his needs? After his classes in the morning, he worked at a burger outlet on the night shift.

At the end of the evening shift, he got a free burger to feed himself. But being from the land of masalas, Kabir soon grew tired of eating the bland burgers and one day decided to give the burger an Indian spicy twist.

“I went to a nearby store and purchased some Shan masalas and tried mixing them in the patty. And to my surprise, it tasted awesome. From then onwards, I made it a habit and gradually started offering that Indo-British fusioned burger to my friends there,” says Kabir.

Soon, the owner of the burger outlet got wind of the popularity of Kabir’s fusion burger and listed it on the menu, giving Kabir an artiste fee for the recipe. The love for Indian food among the English is legendary and they could not have enough of Kabir’s burger. He soon earned the moniker ‘Burger Singh’, and the rest, as they say, is history.

In 2014, he opened the first outlet of ﻿Burger Singh﻿ and today its presence has grown to 55 outlets in 20 cities. The brand is also planning to tap into seven new cities with 20 outlets already in progress.

Beyond meat: Is India developing a taste for mock meat?

Founded by Biraja Prasad Rout in 2011 as a weekend hobby, ﻿Biggies Burger﻿ started with a small kiosk in Bengaluru’s Electronic City, near the Infosys office.

Biraja says the trend of fast-food chains interested him while he was working at HCL Limited. The lack of local brands compelled him to push this opportunity further.

Today, Biggies Burger has a presence across 71 outlets (47 functioning and 24 under-progress) in 25 cities, except in North India. The founder highlights that Biggies Burger functions as a franchisee model, sans one company-owned outlet in Bengaluru.

This year, Biggies has big plans to expand domestically and internationally. Apart from foraying into Singapore, the brand plans to open 306 outlets by 2024, with the current run-rate of five franchises a month.

How Vadilal aims to target millennials with its experiential café outlets

Neelam Singh was always a foodie by heart. It was her love for food that eventually led her to become an entrepreneur.

After working with Genpact and ICICI Lombard, she quit her job in 2017 to start her own food business. She says she wanted to target another gap in the market by opening a fast-food chain for youngsters specifically,

“I grew up in Agra, and there were not many places in those times where we could hang around,” she says.

Today, fast-food chains across the country have considerably grown, and Neelam hopes to carve a niche in this very market.

To set the ball rolling, Neelam started a B2B business. “We took a small shop in the food court in one of the corporates, converted it into a kitchen, and supplied to corporates like Sapient (in Gurgaon). We offered mainly burgers and beverages.”

Seeing the burgers getting a good response, Neelam felt encouraged to take this a step further to start her own fast-food business called ﻿﻿The Burger Company﻿﻿. In 2018, she opened an outlet in Palam Vihar, Gurugram.

Since the pandemic, the brand has scaled up to 42 franchisees and one outlet of its own. Following her dreams, Neelam has also been able to expand to Tier II and Tier III cities like Baraut, Loni, Roorkee, Bhiwani, Rohtak, Ujjain, Aligarh, and more. The larger plan is to open 100 more franchisee outlets by the end of the next fiscal year.

This homegrown burger chain is born by bringing together an information technology professional and a pilot.

Farman Beig and Rajat Jaiswal founded ﻿Wat-a-Burger﻿ in 2016 to offer Indian consumers a taste of fusion burgers with their international and desi flavours.

Since opening the first outlet in Noida Sector 18, Wat-a-Burger has scaled up to more than 60 joints across 16 cities in over four years. This includes Delhi, Bengaluru, Hyderabad, Ghaziabad, Vadodara, Ahmedabad, Guwahati, Lucknow, Chandigarh, Gorakhpur, Faridabad, Ranchi, Jhansi, and Srinagar. Starting a business was always on Farman and Rajat’s minds.

“Rajat and I both have business acumen,” says Farman, who has an IT background.  “While I was in England pursuing my MBA and Rajat was undergoing pilot training, we knew that once we were back in India, we would set up a business together.”

On average the fast-food chain serves more than 80,000 customers every day. The business clocked a turnover of Rs 39 crore in FY20.

Dheeraj Gupta, Founder and Managing Director of Jumbo King, was inspired by John F Love’s McDonald’s: Behind the Arches, when he laid the foundation of his QSR chain with an outlet outside Malad railway station in Mumbai in August 2001.

Over the next few years, he took Jumboking to new heights. However, things went downhill in the next couple of years.

Dheeraj had raised Rs 6.5 crore venture capital from undisclosed sources in 2010, and was soon struggling with unit economics and overhead costs like rents and salaries.

"To win the QSR business in India, you need to own and understand the consumer. Foreign chains have the knowledge and understand what customers choose; that's what Indian brands must solve at scale…we are on that journey," Dheeraj says.

The founder then took a bold bet, completely realigning the business model from company-owned stores to a franchise model. ﻿Jumboking﻿, which was started as a vada pav brand grew to become a prominent burger brand.

Today, Dheeraj and his 15-member team handle 114 franchise stores in two cities, Mumbai and Pune. They have bigger plans: 1,000 stores in the next five to seven years.