From cotton mills to the stock exchange, how this businessman weaved a success story that only began after retirement 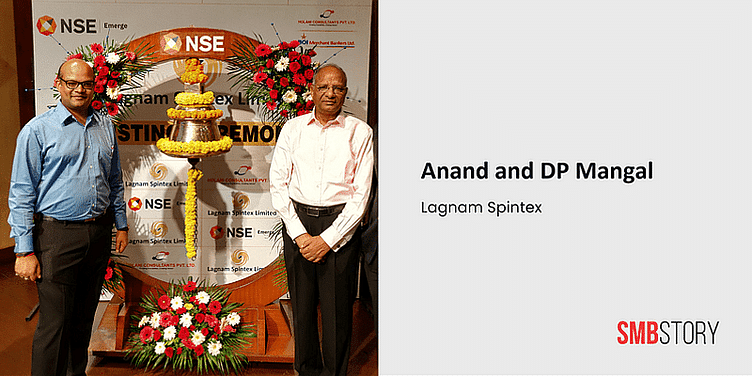 DP Mangal retired from full-time employment in 2010. At the age of 62, he decided to give entrepreneurship a try. Eight years later, his yarn manufacturing company, Lagnam Spintex, got listed on the stock exchange.

While the goal of retirement is to live an easy, slow, and peaceful life, the case was entirely different for entrepreneur Dwarka Prasad Mangal. At 62 in 2010, Mangal was retired, bursting with energy, and wanted to do something at a large scale. “I did not want to do the regular consulting work,” he tells SMBStory.

This is when he decided to give entrepreneurship a shot. Having worked in the textile industry for several years, including in companies such as Rajasthan Spinning & Weaving Mills, Jagatjit Cotton Textile Mills and more, Mangal decided to zero in on this industry to debut into the business market. This is how cotton yarn manufacturer, ﻿Lagnam Spintex﻿, came into existence.

In 2010, he shifted his base from Delhi to Bhilwara, Rajasthan to set up a unit to manufacture ring yarn and open-end yarn. A total of Rs 31 crore was invested to start the business, and according to Mangal, he contributed about 30 percent of the amount, and the rest was financed by a bank.

However, he admits the move was not easy. “It was tough since I put my life’s earnings into the business. Also, shifting from Delhi to Bhilwara, which is not as developed, was not easy,” he says.

The shift, he further adds, was more difficult for his younger son, Anand Mangal. “Anand was born and raised in Delhi. He also lived in London for a couple of years. But we were determined to make our project a success.”

Anand studied at the University of Bradford and worked with ICICI Bank for a couple of years before joining the business in 2012.

The commercial production began in 2012 with 960 open-end rotors. The company clocked Rs 35 crore that year. They also started exporting to Europe from 2013 onwards and expanded to other countries. Today, 55 percent of the production is exported to countries such as Italy, Turkey, Portugal, Columbia, China, Bangladesh and more. Bangladesh, Mangal highlights, is the company’s biggest market.

From ice-creams to healthy snacks: How Havmor’s Ankit Chona is scaling up a nutrition brand

India and the market

According to a report by Statista, cotton has the largest share of yarn production in India, and cotton yarn has a market share of 71 percent. Additionally, the textile and apparel industry contributes about 2.3 percent to the GDP. What’s more, India is one of the largest producers of textile yarn in the world.

Moreover, significant revenues of the company come from the global market. This year, Mangal says he expects a turnover of Rs 325 crore, of which Rs 180 crore will be from exports.

How have they been able to chart this growth journey?

By relying on technology and focusing on always keeping the quality of the yarn unmatchable, he says.

He adds that the factory, over the years, has also automated several production processes to ensure impeccable quality and ease in logistics, and the machinery is exported from different countries such as Germany, Switzerland, and Spain.

At present, Lagnam has installed 1,920 rotors, and 25,536 spindles, producing 35 tonnes of yarn every day. In 2018, the company also got listed on National Stock Exchange’s SME platform. This year it migrated to the main platform of NSE.

COVID-19 impact and the road ahead

Terming the COVID-19 pandemic a nightmare, Mangal recalls that the production unit was completely shut for close to a month between March and April in 2020, which resulted in losses in the next few quarters. Labour shortage also added to the woes of the company as several workers had fled cities to their hometowns.

Mangal adds that the company was able to survive because of the exports. “The demand in India was zero as nobody was stepping out. In the global market, there was disruption but there was no dearth of demand.”

Mangal points out that the pandemic has changed a lot of things but the biggest change it has brought about is the perception among global sellers and buyers that an in-person meeting is important to keep the business going.

“Earlier the mindset of the buyer was that the seller needs to meet him or her in person to build a relationship but that is no longer true,” he says, adding that his international business trips have reduced considerably, thanks to digital means of interaction.

Going forward, the entrepreneur’s plan is to continue to expand its presence across the world and penetrate deeper into the markets it is present. The business is also on the path of recovery. “The months between October 2020 and March 2021 played a role in recovering the business,” he concludes.