How these friends are solving footwear wastage, with their vegan shoe brand clocking Rs 3 Cr turnover 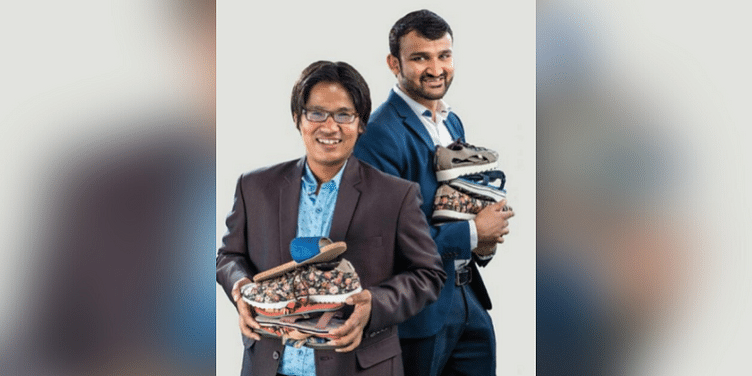 Greensole was founded by friends duo Shreyans Bhandari and Ramesh Dhami to reduce the wastage of shoes by recycling them. They also launched a vegan footwear range for consumers in 2019 and in FY 2019-20, clocked a turnover of Rs 3 crore besides partnering with 26 corporates for CSR initiatives.

According to the World Health Organisation, more than 35 crore pairs of shoes are discarded all over the world every year. This presents a threat to the planet as World Footwear estimates that soles may last up to 1,000 years in a landfill.

Being athletes, friends Shreyans Bhandari and Ramesh Dhami knew that the wearing out and wastage of shoes was common. While running together through Priyadarshani park in Mumbai, the duo got thinking about the big unaddressed problem, and how many pairs of shoes go to waste every year.

“Intense running and workout wear out shoes in a couple of months. This generates a lot of waste as damaged shoes aren’t properly disposed of. We realised this when both of us were left with discarded pairs of shoes and we didn’t want them to just be thrown away,” Shriyans Bhandari, Co-founder, Greensole tells SMBStory.

This made the duo wonder if there was an alternate way to use these shoes, and that’s when they came upon the idea of recycling them.

With the aim to make the world more sustainable and eco-friendly, Shreyans and Ramesh started Greensole in 2015 with a capital of Rs 10 lakh to recycle old pair of shoes for corporates. The brand also made a retail presence in 2019 by launching a vegan footwear range.

In a span of a little over five years, Greensole now operates under two entities – B2B and retail, selling recycled shoes to corporates for their CSR initiatives and vegan footwear directly to customers, respectively.

With gender-neutral shoes, this Noida-based brand is making customers spoilt for choice

Working for a cause

Before founding Greensole, Shreyans and Ramesh participated in a competition conducted by IIT Bombay, and showcased their prototype of a slipper made out of a shoe. That’s when the concept began to take shape.

The duo began by upcycling shoes into slippers and donated them to various NGOs via CSR donations.

At first, they sold recycled shoes to JLL for its CSR initiatives, followed by ONGC, ADIDAS, Skechers, and more. Today, it has partnered with around 65 corporates for its B2B recycled shoes business.

“We started with just upcycling shoes into slippers and donating them to the ones in need via CSR donations. But in recent years, we’ve also ventured into various categories like slip-on and lace-ups. We now retail these upcycled and new footwears as well, which are vegan,” Shreyans says.

The company sources old shoes from various schools, colleges as well as individual donations to refurbish them. It works with corporates that collect old and worn-out shoes from their employees for refurbishing. Along with that, the company also has tie-ups with footwear brands like H&M, Metro, Adidas, and more which pass on their dead stock to Greensole for recycling.

Shreyans says that in order to manufacture shoes, they partnered with Ram Fashion Exports in Mumbai that helped them scale the production of both recycled and vegan footwear. It also has a skill centre at Tata Steel in Jharkhand.

The price of vegan footwear, which is sold through the D2C brand, costs between Rs 800 and Rs 3,500. The products are available on Greensole’s website and ecommerce portals like Amazon and Flipkart.

This homegrown shoe brand is competing with Woodland, Clarks, Cole Haan in the premium men’s segment

The global sustainable footwear market size was valued at $7.5 billion in 2019 and is expected to grow at a compound annual growth rate (CAGR) of 5.8 percent from 2020 to 2027. The market growth is attributed to advancements in sustainable space.

“Unlike before, people are now becoming conscious and adopting the sustainable approach in their lifestyle. However, there’s still a long way to go,” Shreyans says.

He further adds that though using recycled goods is a familiar concept, veganism is still new to the Indian market and it will take some time to gain traction. This is both an opportunity and a challenge.

Competing with the likes of Neeman’s, and BlinkGreen, Shreyans says that both the customers and the government are becoming increasingly environmentally conscious. This is why now is the most appropriate time for the business to take off.

“There’s also a lot more to this industry than just what we do. There are endless options when it comes to refurbishing,” he adds.

Diversification is the future

Greensole is looking to scale up refurbishing old shoes and soles by roping in more mainstream footwear and apparel brands.

“We’re also looking to get more and more corporate companies to collaborate with and push them to donate close to a million pairs of shoes,” Shreyans says, while talking about the future plans.

From a retail perspective, Shreyans says they want to get more products on the table and also increase the brand presence amongst the audience.

Greensole also aims to develop technology that’ll help them create biodegradable footwear to reduce wastage, and Shrenyans says that this technology is being adopted by prominent brands and holds a promising future.