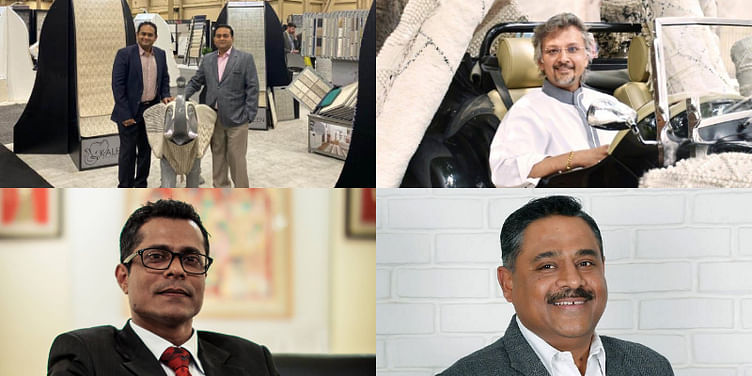 India’s handmade rugs have wide international appeal despite competition from machine-made varieties of Turkey, China, and the US. SMBStory curates a list of four Indian brands making their mark abroad.

Carpet weaving in India dates back to the 16th century, when Mughal emperor Akbar tried bringing weavers from Persia to make rugs for his palace. Today, India is a hub of carpets that have much demand in the international market.

According to a report by Mordor Intelligence, almost 90 percent of carpets made in India are exported, with overseas shipments worth Rs 64,407.19 crore ($916.15 million) during April-November 2019.

Indian handmade rugs have wide international appeal, despite competition from countries such as Turkey, China, and the US that specialise in machine-made carpets. SMBStory curates a list of four domestic manufacturers that export India-made rugs to several countries.

A hundred years ago, on the banks of the Ganges, three British men started a small, carpet-making enterprise. It was 1920, shortly after World War I, and the founders were looking to capitalise on the rising popularity of Indian carpets in the West.

Over the last century, Obeetee has built its legacy as one of India’s largest handmade carpet and rug makers. Its primary factory in Gopiganj, Uttar Pradesh, has 1,100 employees and the brand works with 20,000 artisans, who manufacture the handmade products.

Obeetee Managing Director Gaurav Sharma says: “We have strong manufacturing processes and artisans trained in the fine art of carpet weaving. Some of our finest artisans can tie up to 9,000 knots a day. Our hand-knotted qualities range from 15 knots to 300 knots per square inch, which take anywhere between four and 18 months of weaving time.”

The Rashtrapati Bhavan in Delhi is home to two Obeetee rugs, the larger one of which measures 452 square metres and contains 100 million intricate knots. The US is a large market for the company.

Until 1994, Radhe Rathi was involved in his family’s textile business, handling its exports arm. But due to some  differences, he decided to move out. Radhe, who had been living and working in the US, saw an opportunity in the rugs market when a trading project accidentally fell into his hands.

He dived into the industry and started exploring new avenues. In 1996, he established ﻿Kaleen India﻿, a rug manufacturing and sales  business. Although the company started out trading rugs in the overseas markets, it  gradually moved into manufacturing.

In 2000, Radhe’s younger brother, Monty Rathi, Chief Operating Officer of Kaleen Group, joined the business and the duo shifted base from the US to Mumbai, setting up manufacturing units in Panipat, Mirzapur, and Bikaner. At present, Radhe divides his time between the US and India.

Radhe emphasises that Kaleen India’s USP is leveraging technology in a largely traditional business segment. The company specialises in machine-made and handmade carpets using techniques such as  hand-knotting, hand-tufting on broadlooms, pit looms, and power looms.

Kaleen has a network of clients spanning over 50 countries, including the UK, US, Canada, and Brazil. It claims to ship more than 95 percent of its orders within 48 hours. The company has also made carpets for luxury hotel chains such as Marriott International, Hilton, and the Hyatt through distribution partners in the US.

Aditya Gupta got attuned to carpets and rugs while growing up in Meerut. His parents, JK Gupta and Meenakshi Gupta, had started making carpets at their home in 1983, when Aditya was  in Class X. Eight years later, after completing his education from the Indian Institute of Technology, Roorkee, and Faculty of Management Studies, Delhi, Aditya joined the business with his brother, Ashish Gupta. Their company came to be known as Sharda Exports.

The business was earlier focused on the domestic market, until there was an opportunity to showcase its collection at an exhibition in Germany. Sharda thus entered the overseas market in 1991.

Currently, The Rug Republic manufactures five lakh carpets a year and  exports to 85 countries. Aditya doesn’t disclose the turnover, but says the company’s growth rate is around 20 percent year-on-year. The Rug Republic has an exclusive showroom in Delhi and more than 10,000 retail stores worldwide.

Asif Rahman’s association with carpets started in 1988, when he was frantically looking for job opportunities after graduating from Calcutta University. One day, he stopped outside a rug store on  Kolkata’s Park Street and started checking out the carpets through the glass window. Intrigued, the owner called him inside and after a brief conversation, offered him a job to head his carpet installation team. Asif started working with the team to install carpets at five-star hotels. Thus began a three-decade-long journey in the carpet industry.

Asif launched ﻿Insigne Carpets﻿ in 2011 with a primary investment of Rs 35 lakh from personal savings. The Gurugram-based luxury brand is an end-to-end solutions provider offering consultation, manufacturing, installation of carpets, and other services.

The company has an impressive clientele across the  entertainment, hospitality, commercial, residential  and other sectors. It has designed and created carpets for luxury projects such as  La Samaritaine (Paris), The Pierre (New York), Wynn Casino (Las Vegas), and Salalah International Airport (Oman).  The company’s USP, Asif tells SMBStory, is  customisation. He claims that the company  makes only one piece of a particular design and doesn’t recreate it  again.

Started as a B2B saree brand, this five-decade-old business took the D2C route to ride out the pandemic