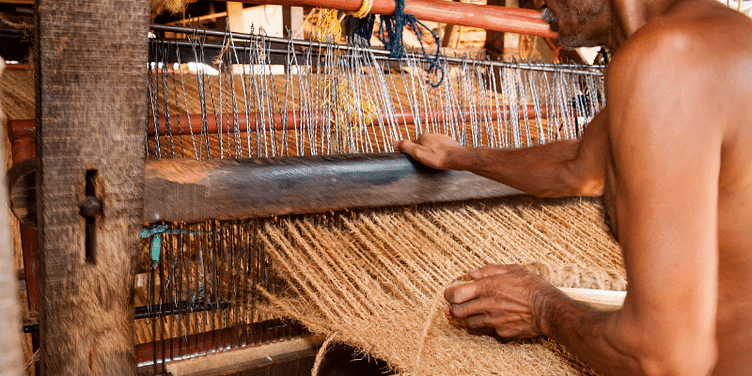 Being a geo-textile fibre and bio-degradable, coir is extremely eco-friendly. Undoubtedly, it is the fibre of the future today.

Remember the olden days when every house had its own coir rope cots, people used to sit around in the verandah and chit-chat. The coir products were really ‘in’ then. From rope cots to mattings, to coir plant pots, this natural fibre was used in many products of daily use. Needless to say, life was good and the environment sustained.

As the world progressed, our mother nature became vulnerable. The globalisation came at a cost of our environment dissipating the use of natural fibre and its products. And, the traditional industries were shaken. According to reports, in the year 2012, the coir industry lost its supremacy and there was no representation of the industry to the outside world.

This golden fibre has its home in Kerala and is extracted from the husk of the coconut. Kerala is the land of coconut trees and from its culture to dishes, everything evolves around coconut. The coir is largely produced in this coastal region and according to sources, the industry once employed around five lakh people. However, the negligence towards development and the choices of people drifting towards western culture made this home-grown industry vulnerable.

But, time changes and old trends do come back!

The demand for coir suddenly increased and the scope of growth was seen. Fortunately, because of the continuous awareness about environment protection. Being a geo-textile fibre and bio-degradable in nature, the fibre is completely eco-friendly and very strong. Within a short span of time, its export increased considerably and it became a significant industry in boosting the Indian economy.

Talking about today, the Indian coir industry exports to around 72 countries and the Coir Board is looking at doubling the export revenue in the upcoming years.

The coir industry in the 21st century has a diverse market. It has spread its wings to the food industry, upholstery, agriculture industry, fishing industry and many more. From being used for insulation to make cold storages for food preservation, to filling up mattresses, automobile seats and seating systems, the coir is an extremely useful fibre. It is also used to make nets which are used to prevent soil erosion.

Kerala alone accounts for approximately 61 percent of India's coconut production and 85 percent of total coir products. Every day, thousands of women in Alappuzha (in Kerala), carry heaps of coconut husk, feeding machines that turn them into the useful thread.

The government has also played a vital role in reviving the lost fame of the traditional Indian industry by introducing various schemes and programmes to promote it. The opportunities to initiate manufacturing of value added products and introducing schemes like SFURTI (Scheme of Fund for Regeneration of Traditional Industries), Coir Udyami Yojana and Export Market Promotion Scheme has given wings to this golden industry.

The production of the coir has also extended to other coastal regions of Odisha, Goa and Andhra Pradesh. Besides the traditional products, the golden coir fibre has also made its valuable space in the luxury lifestyle products by successively enhancing its quality. The industry employs lakhs of weavers and spinners.

Undoubtedly, it is the fibre of the future today.