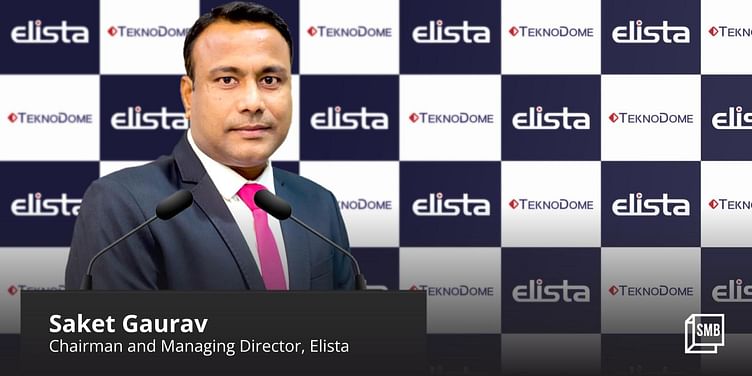 Established in 2020, Elista, the Noida-based consumer electronics brand, has expanded to 300 cities in three years. Now, it eyes global expansion.

Hailing from Bihar’s Patna district, Saket Gaurav was encouraged to pursue engineering by his family. The 48-year-old had no plans of becoming an entrepreneur.

To fulfil his parents’ aspirations, Saket moved to Moscow and enrolled at the Moscow State Institute of Radio Engineering, Electronics, and Automation to earn a degree in computer engineering.

In 1999, after completing his master’s degree, he started working at a Russian company for a while before he moved to Dubai to join another firm. However, the 2007-08 financial crisis forced the company to shut shop in the Middle East.

Saket, who calls himself an ‘accidental entrepreneur’, was left with two options—either he starts looking for new jobs or build his own company.

With almost nine years of experience in consumer electronics, Saket chose to do the latter and founded Dubai-headquartered TecknoDome in 2008. With very limited resources, he began trading consumer electronics, where he would import products from the East to sell in Central Asian and Middle Eastern countries.

Gradually, TecknoDome entered distribution, followed by retail and service. After 14 years of operations as a global distributor of leading brands, it established ﻿Elista﻿, a consumer electronics brand, in August 2020, headquartered in Noida.

“Our idea was a bit different from other Indian brands. Our intention was not just to associate with Aatmanirbhar Bharat but to bring this brand to international consumers through our already established distribution network,” Saket, Managing Director and Chairman of Elista, tells SMBStory.

Instead of restricting itself to domestic sales, Elista also focuses on exports.

According to the data provided by the company, Elista’s revenue reached Rs 35 crore during its first year of operation. In FY22, the company reported Rs 158.8 crore in revenue and Rs 50 crore in the April-June quarter of FY23.

In fact, nearly two decades’ worth of prior understanding of the IT, electronics, and consumer electronics industries has helped Elista grow. Another advantage was the affordability of its products. "We simply adhere to the value for money formula," he adds.

New brands are expected to market products already running in the market. However, it has not stopped Saket to experiment with Elista’s product categories.

For example, Saket predicts that dishwashers—a product category not popular in India—will be a standard feature in all homes, much like washing machines, in five to six years.

The company launched dishwashers, as well as WebOS-powered smart TVs, with the same features at a price point of 15% less than its competitors, including LG, Panasonic, and Haier, among others.

“This might not be profitable for us currently, but it is helping us get a strong foothold in the market, and we have other verticals that compensate for the low profit,” he adds.

The company expects to launch its first manufacturing plant in south India by February 2023, which will aid in Elista’s global plans. The company aims to get the raw materials imported and assemble its products in India.

According to Saket, this move will help in job creation as factories would require around 500 people to work. Today, Elista’s workforce comprises around 300 employees.

The Noida-headquartered company has a dealership network of 350 distributors, with a presence in nearly 15,000 retail outlets across India. This year, it plans to expand its business to online platforms.

“We work on the market operating price cost structure, and we need to properly balance that before we come online. We will first need to position the brand and then work on marketing and pricing,” he adds.

From a small provision store, this entrepreneur went on to build a Rs 185 Cr tea retail business

Making in India for the world

According to Saket, many Indian brands, operating for over 70 years, have negligible visibility in the international market, and Elista wishes to change that narrative.

The company aims to make India a major player in the global consumer electronics market, similar to China. Additionally, Saket points out that India has an advantage in the global market because of the economic sanctions on China by the West.

“The dominance of foreign brands suits a country that does not have the manpower. That is not the case with India. We have all the resources to be independent. We need to refrain from importing products and rather focus on exporting,” Saket says.

“Our vision is big, and if we keep small targets, we will be able to achieve it,” Saket says. Elista is not striving for exponential growth but rather building a sustainable and profitable business that lasts long.

In December 2022, the company announced expanding its operations in the UAE. It plans to expand to 40 countries in the coming years.

In India, the company is present in 300 cities. It aims to penetrate deeper into Tier II and III cities. Moreover, the company expects to reach a revenue target of Rs 200 crore in this financial year.

“When we were just six months old, we were compared to very old brands. This is a compliment for us,” says Saket.