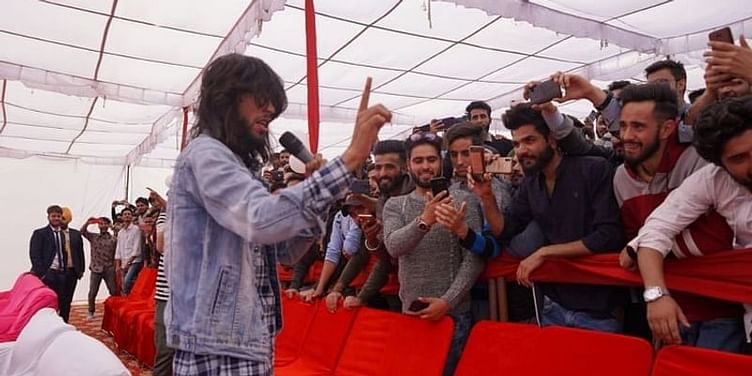 Baabarr Hasan aka Baabarr Mudacer is a Kashmiri YouTube Sensation who is garnering praise and acclaim across India for his songs and his selfless works of charity.

Being born with an artistic soul is one of the greatest gifts of God. But an artist who uses his gift to make the world a better place is priceless.

Baabarr Hasan aka Baabarr Mudacer is the man with a golden heart. His melodious voice has earned him accolades from across the country, but he is also known for his love for his people and his spirit of great generosity.

This YouTube sensation often brings to the fore the happenings in Kashmir through his songs.

In an interaction with YSWeekender, Baabarr sheds light on his musical journey, his contribution to society, and the memories of his first guitar.

“I am not a trained singer. During my school days, I used to participate in music shows and as time passed by, I started singing at various events too. I loved to sing and continued singing with no aim in mind,” he says.

Born in 1995, this -25-year-old artist comes from a middle-class family where completing school, earning a college degree, and finding a fine job is the ideal way to live. But, Baabarr did not have any such plans.

His innate love for music ran too deep and so, after completing Class XII he took to YouTube to learn music and take voice lessons.

“We couldn’t afford to join an academy to pursue music lessons but I found everything that I needed on YouTube, I also remember my first guitar which I purchased from a shop near Dal Lake.  I didn’t have any money to buy it but my childhood friend Abid helped me get Rs 7,000 to buy the guitar.”

Abid has been Baabarr’s friend since his school days All the music albums created by Baabarr are shot and edited by Abid.

In 2014, Baabarr officially launched his YouTube channel with his first song Gah Choun.

“Abid was studying in Chandigarh and on the day we uploaded our first song, he had to go back to Chandigarh for some work. It was a day, just like any other when suddenly I got a call from Abid. He informed me that our song had hit 1 lakh views. Recalling that moment still gives me goosebumps,” says Baabarr.

Today, Baabarr has a huge YouTube fan following with over 50,000 subscribers. Both Baabarr and Abid have launched their record label Kash Graph under which they release songs.

Baabarr pens lyrics to promote Kashmiri culture and also explicitly narrates (via raps) the problems that the people living in Kashmir go through.

“Till date, I have uploaded 15 songs and many of my songs had to be deleted due to the backlash I received in my early days,” he remembers.

There were also posters rolled out in Kashmir defaming Baabarr’s work and some people wrote derogatory comments about him too. None of this deterred Baabarr from pursuing his goals.

But as time passed by, through his songs, lyrics and rap songs rap, Baabarr created awareness among the people. People did not accept him initially but soon he made people understand his work and he became their voice. And since then, there has been no looking back.

“When you suddenly bring to the fore what’s deeply rooted inside, it becomes unacceptable. The same thing happened with me. I brought to the fore what people felt but nobody wanted to accept it initially. However, gradually, they did.”

Baabarr says he is one of the first artists in Kashmir to introduce a female model in his song Zindagi Roshit that was released last year.

Kindness is the key

Baabarr is not only born with the gift of voice but also the great gift of kindness. The selfless artist donates a big part of his earnings to those in need.

He introduces people in need to his audience during live shows. At the end of most of these shows, he shares the bank details of the needy person so that people can donate money to the cause.

Recently, Baabarr helped a 17-year-old boy to overcome a kidney disease and was able to collect Rs 4 lakh in three days.

“I donate what I can. But earning money for myself is not my aim.”

Being an independent artist, Baabarr feels good about what he is doing. Though he wishes to enter Bollywood someday he wants to do so without the cost of losing himself.

“Right now, Abid and I manage everything. From stage shows to music albums, we handle everything together,” he says.

Baabarr had left his studies in pursuit of music but now that the world has come to a halt due to the pandemic, he is planning to pursue an academic degree in music soon.