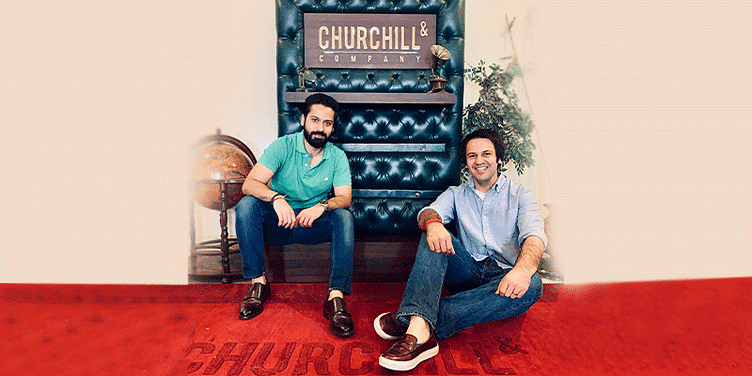 Churchill & Company counts sourcing raw materials from Northampton, using its trademark technology and the logistics setup as its USP.

The first thought that perhaps comes to one’s mind when one hears the name of ﻿Churchill & Company﻿ is whether it is a British brand? Or whether it has any connection with former Prime Minister of Britain, Winston Churchill?

But Churchill & Company is a brand that has its roots in India. The company’s one and only manufacturing unit is based in Jalandhar, Punjab.

Churchill & Company was founded in 2017 by two young entrepreneurs Abhishek Chopra (32) and Sagar Sarin (28). Though relatively new, it is all set to compete in the crowded men’s footwear market in India which has the likes of Zara and Woodland.

SMBStory spoke to Abhishek and Sagar about their brand and their journey so far.

The two were working in Philip Morris International and Zomato respectively before they quit their jobs to start Churchill & Company with savings amounting to Rs 40 lakh.

The idea behind launching the brand was to manufacture stylish and comfortable shoes at affordable prices. Abhishek saw a gap in the market that compelled him to launch a footwear brand that reaches an equilibrium where the three aspects meet. He says,

“There are only a few options available in the premium men’s footwear sector. Some of the biggest brands are of phenomenal quality but do not do justice to the Indian market in terms of pricing.”

This led to the conceptualisation of the brand.

With his first clinic in a garage, this doctor's Ayurveda business now clocks Rs 90Cr turnover

A brand backed with technology

Whenever you are manufacturing a product, craftsmanship and the technology you are using are the first few things that determine the strength of your product, Abhishek says adding that there’s a big misconception in India where hand lasted shoes are often referred to as handmade shoes.

Churchill & Company combines modern techniques using state-of-the-art machinery and craftsmanship to create good quality products. The shoe manufactured by the company has a combination of lightweight leather soles and the shoes are made using toe lasting, counter molding and several other machines.

Despite both the founders being based out of Delhi and the company headquartered in Delhi, Churchill & Company has set up its manufacturing unit in Jalandhar. Explaining the reason behind this, Abhishek says,

“There is a very capable individual in Punjab whom I know and who has a long experience in manufacturing footwear. I did not want to displace him. Thus, the decision to set up the factory there.”

The company has also developed its trademark foot-bed technology  Softherapy™. The leather lined foot-bed delivers a softer foot strike to the ground devoid of any stiffness and helps in achieving a balance of firmness and softness in the shoes.

Besides the technology, a lot of thought and effort has gone into sourcing raw materials from Europe to make this product. To get the mould of the shoe right, the founders flew to Northampton, England. Abhishek says,

“Northampton is one of the oldest shoe-making cities in the world where shoe makers have the craft and knowledge to make the perfect design. A mould is 70 percent of the functional part of the product and that is why we spend thousands of pounds in getting the right moulds developed.”

The moulds are traditionally made from wooden logs, which are cut using computerised numerical control (CNC) machines. These logs are then finished by hands to achieve greater precision. And then, the final mould is then replicated in a machine which is made from high density plastic which makes it perfect for mass production.

The leathers are imported from England and other parts of Europe.

This decade is turning out to be the era of hyperlocal delivery companies. Small businesses will definitely benefit with logistics players such as Dunzo, Delhivery, Shadowfax, Locus and many more emerging in the market.

Abhishek points out that last year, e-commerce giant Flipkart acquired a minority stake in Bengaluru-based logistics platform Shadowfax. Why? Because logistics, in today’s time, is seen as the backbone of ecommerce.

According to a report by Ken Research, the hyperlocal market in India will be worth more than Rs 2,306 crore by 2020. The success of a business, in today’s time, to a large extent depends on how much has been invested in setting up supply chains and distribution channels. Logistics ensures seamless supply chain management and end-to-end solutions.

The biggest challenge, Sagar says, was setting up a structured supply chain and ensuring that operations in the logistics space remain unhindered. He says, “It was very challenging to put together the best and the most economic supply chains. For that, we established a strong pre-sales and after-sales team.”

Churchill & Company claim that their damaged products return rate is 0 percent and they attribute it to multi-level quality checks. Quality of the shoe is checked at the factory level, packaging stage, and even before dispatching. Furthermore, the boxes in which these shoes are packed can withstand a weight of 60-65 kg.

Among other brands in the market, Churchill & Company’s logistics is its USP that is going to help it grow in the coming times.

Besides getting the logistics right, the co-founders believe that an equal amount of effort has gone into putting together a team of six people and cracking the digital marketing code.

They are also available on e-commerce websites like Myntra, Amazon and Flipkart.

The company claims to have sales worth Rs 1.7 crore from the website. Abhishek says, “A lot of sales also come from the northeast region since a lot of brands don’t deliver there because it is expensive.

There are no shipping charges levied by the company which sells its products, priced between Rs 4,199 and Rs 6,999, on MRP.

Churchill & Company has also tied up with 10 multi-brand outlets (MBOs) in Punjab and Delhi to sell its products. It plans to open a store of its own in west and south India soon.

The brand sells around 350 and 200-250 pairs every month on online and offline platforms respectively.

The co-founders don’t wish to disclose their turnover but however add, “Our aim is to maintain the 4x growth we have been seeing year after year.”

They also have exciting ranges and variety coming up. Apart from plans to open a branch in the European market, starting from England, Churchill & Company will soon launch a range of shoes in the sneakers, boots, Softherapy deck shoes and women’s footwear category. They will also look at venturing into the unisex bags segment.

Boots, in particular, are something the co-founders are serious about. Abhishek says,

“I used to always believe that India is more of a shoe market and there is no market for boots. However, I have realised over the years that boots are going to be huge in the next three-four years in India.”