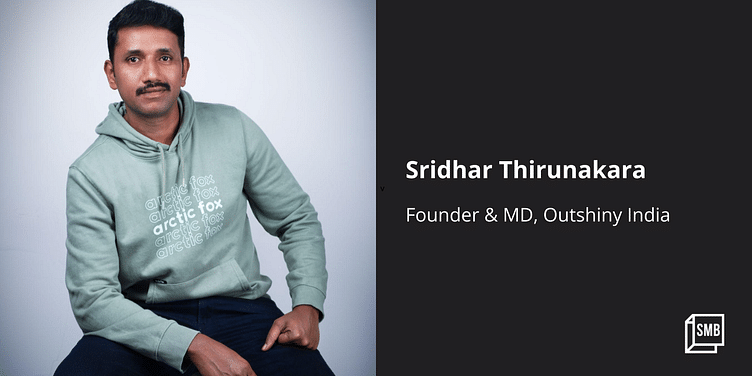 From a retailer to a manufacturer for leading companies, here’s how Sridhar Thirunakara transformed the laptop accessories business into a lifestyle brand and even forayed into electric vehicles.

With plans to become an entrepreneur, Sridhar quit his job and started a small business. At that time, little did he know that, in the following years, he would play a strong role in contributing to the Make in India initiative.

The homegrown company is an OEM/ODM of laptop bags for leading technology companies including HP, Lenovo, and Acer. It manufactures its products from four units located across Bengaluru.

So, what propelled Sridhar to build this Rs 165-crore revenue company from scratch?

From a computer store to a lifestyle brand

In 2010, the then 30-year-old Sridhar was running his computer store, Outshiny, where he sold products from brands like Acer. He had acquired technical knowledge on the job; so setting up his own business was easy. However, he wasn’t happy with the laptop bags that he was offering to customers.

“This wasn’t just the case in my store. I saw that the quality and design could have been better, and I started researching. Back then, most of these accessories came from China, and competing in a similar price range was tough. I saw a good opportunity, and not many companies were making these bags completely in-house. So, I tapped on to that opportunity,” Sridhar tells SMBStory.

A year later, Sridhar started making laptop bags and simultaneously operated the store till 2012. However, when he started getting good responses for the bags, he shut the store and pursued his manufacturing business full-time.

Sridhar reached out to Acer as he was already dealing with the company’s products. However, such big companies have their dedicated supply system, and getting approvals would take months.

Meanwhile, the Tamil Nadu government, which was distributing laptops to students free of cost at the time, needed customised bags that would include the government’s logo and other details.

“The government gave the contract to Acer. However, as the notice was short, it would take months to make the bags and dispatch from China for such customisations. As we had already pitched to them (Acer), they did a pilot project with us and gave us the order for 5,000 units of these bags,” says Sridhar, Founder and Managing Director, Outshiny.

“It was a challenge, but I was just waiting for one opportunity where I could show my work, and this was it. Within 30 days, we fulfilled the order, and since then, we are growing upwards.”

In 2018, when India was witnessing an ecommerce boom, Sridhar decided to start a direct-to-consumer (D2C) platform, Arctic Fox, to cater to customers with its wide range of offerings. Today, the brand boasts a customer base of four lakh and sees a repeat rate of about 40% on the website. Arctic Fox products are also available on Amazon, Flipkart, Croma, etc.

Artic Fox found many opportunities amid the COVID-19 pandemic when supply chains were disrupted. At the same time, the Make in India movement also gained momentum, which bolstered Outshiny’s business.

In fact, the ban on Chinese products led Sridhar to venture into making in-house keyboards, computer mouses, and gaming mouses.

As of 2022, Sridhar says Outshiny is a major manufacturer of laptop bags for computer companies, occupying nearly 70% share in the Indian market. “Now, companies have opened their eyes and want Indian companies to make products for them,” he says.

The company has also cleared audits of HP to sell in the global market and might soon service HP in other countries.

At present, Sridhar is planning to start another manufacturing line on Hosur Road, Bengaluru. When asked how he stays relevant amid the huge competition, Sridhar says the keyboard and mouse market is an established one, and the major competition comes from China.

“New entries are fewer. The big challenge is to compete with Chinese companies—organised and unorganised. This is the space where we are investing for long-term gains,” he says.

This digital marketer got Rs 8 lakh funding from his boss, quit his job to start a women handbag brand

The demand for laptop accessories is primarily driven by the growing popularity of e-sports and the adoption of process automation in industries.

Sridhar enjoys the first-mover advantage in India. In the coming months, the company has a pipeline of launches—smartwatches, cameras, and audio accessories including earbuds and earphones.

“Effective 2022, we have technology transfer from DRDO to manufacture two products at present—ergonomic rucksacks for defence purposes and female body protector suite used by reserve police forces. This tech transfer will be valid for 10 years,” says Sridhar.

The company is also looking keenly at electric vehicles. Sridhar has diversified into manufacturing Moon E-Kick Scooter electric scooter, launched four months ago as a pilot. “We have sold around 50 units and are trying to understand the market to develop strategies,” he says.

The influence of the National Logistics Policy on MSMEs in India