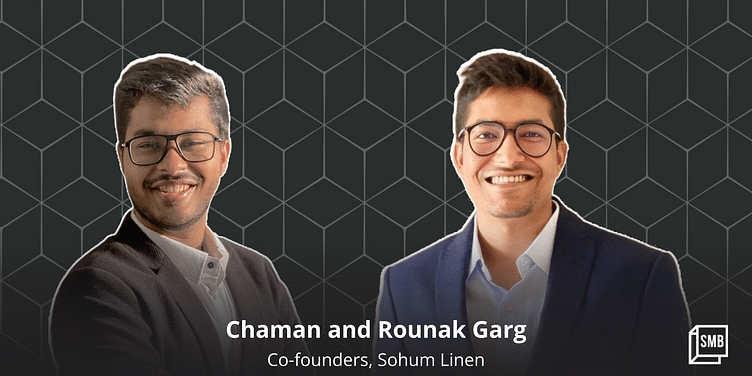 Founded by brothers Rounak and Chaman Garg, Sohum Linen supplies bed and bath linens to hotels in India. Started in 2020 with a capital of Rs 10 lakh, the company has seen significant growth in just two years.

The Indian hotel industry is estimated to reach a value of Rs 1,210.87 billion by 2023, according to Market Research. Room stays are a major contributor to this growth, representing approximately 53.6% of total revenue for Indian hotels. However, one aspect of the hotel experience, bed and bath linens, remains highly unorganised.

Identifying a gap in the market, brothers Rounak and Chaman Garg launched ﻿Sohum Linen﻿ to supply bed and bath linens to hotels, specifically catering to individual property owners who lack a centralised supply chain. Despite the fragmentation of the industry, the brothers believe the market potential for bed and bath linens is significant.

The Siliguri-based company is a B2B and B2C business, which the duo started with a capital of Rs 10 lakh they borrowed from their family. Started in 2020, the company, since inception, has catered to more than 1,500 hotels pan India, experiencing 128% growth since beginning.

So, what made these graduates from Christ University, Bengaluru, to make their way to start a business in the foothills of Himalayas?

Rounak and Chaman hail from a family that is into textile business. Their father was into the business of trading sarees, fabrics, and even linens, but on a small scale in Siliguri. After completing their studies, the brothers initially started helping their father in his business. But when their uncle, who owned a hotel in the city, came to visit and shared his struggles to find reliable linen vendors, the brothers saw an opportunity. They knew that many hotel owners, particularly those with small properties, had difficulty accessing high-quality linens at affordable prices.

Determined to fill this gap, the brothers started their own linen business in Siliguri. They chose the location strategically, knowing that by staying in their hometown, they could cater to nearby tier II and III areas that were often overlooked by larger enterprises. The added bonus was that Siliguri also shares borders with China, Bhutan, and Nepal.

The brothers began their journey in December 2020, but it wasn’t until August 2021 that they began to see real results. The first seven to eight months were spent building relationships with manufacturers, setting up their supply chain, and reaching out to potential clients.

Their hard work paid off when their first order came in from Angirasa Luxury Camping, a resort in Telangana. They quickly followed that with an order from an AirBnB property in Chennai. By focusing on digital marketing, they were able to gain more organic orders and expand their reach across India without any dependence on marketplace or distributors.

“Today, our linens can be found in hotels from Shimla in the north to Chennai in the south. Our focus area is small individual properties like 15-20 room hotels,” say Rounak and Chaman.

The quality of the bed and bath linen is determined by the thread count. Rounak says that hotels use cotton bedsheets ranging between 220 to 400 thread count, which is available between a price point of Rs 375 and Rs 1,100 depending upon the requirement- single size, queen or king size.

“Small property owners with 20 rooms require 40 sets of bedsheets in one season on a lower note, so you can see that the demand is here to stay and will only increase with increasing tourism,” says Rounak.

Sohum Linen caters to customers with bedsheets in average ticket size between Rs 250 to Rs 600, besides also dealing in other products including pillow covers, duvets, bath linens like towels, robes, etc and is competing with the likes of manufacturers and traders supplying to the premium hotel segment.

One of the major challenges the brothers go through is finding talented individuals to build their team. "This is because we are operating from a small city," says Rounak.

Despite this, the company has been able to establish a growing customer base and even has its own website for retail and wholesale sales.

However, the company has faced skepticism from buyers based in larger cities. “Even buyers, who are present in tier I cities sometimes are hesitant to buy from us since we are from a smaller city and they are sceptical about the quality," says Chaman. Despite this, the company has been able to establish repeat customers.

Looking to the future, the brothers aim to expand their presence beyond India in countries like Bhutan and Nepal. Additionally, they plan to create clusters in larger cities such as Chandigarh, Delhi, and Bengaluru for improved logistics.