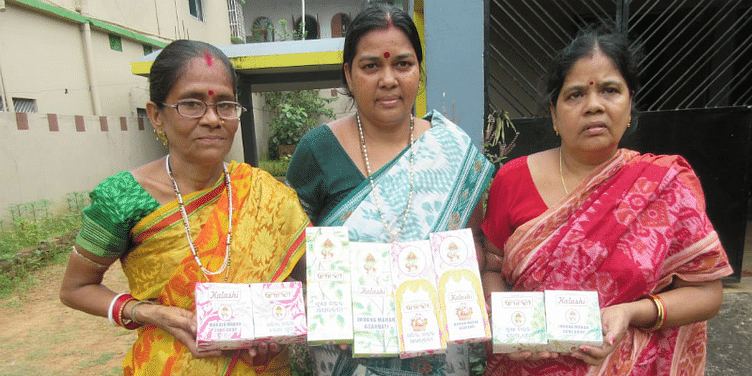 Fifty two-year-old Jangyaseni Jena from Dhenkanal in Odisha fondly remembers working at a self-help group in 2009, where she advised women about the means to generate income for themselves while staying at home.

But, after working for two years and providing mentorship till 2011, Jangyaseni lost her job. She says,

“I was in the position of those helpless women. With a chuckle, she recalls how giving advice was much easier than implementing it”.

She saw a glimmer of hope when officials from Odisha’s Rural Development and Marketing Society (ORMAS) met her during one of their visit to her village.

They advised Jangyaseni to start making insense sticks (Agarbattis) and form a women cluster by mobilising women from the nearby villages. Jangyaseni accepted the proposal. ORMAS also provided her with skill training and Rs 50,000 for purchasing the raw material. 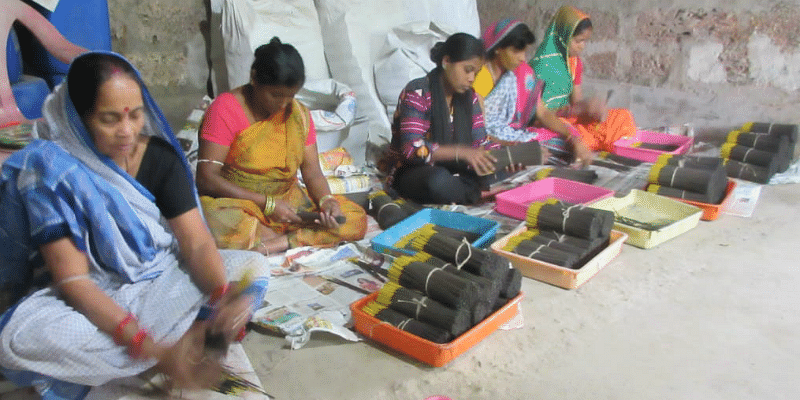 With this, Jangyaseni launched her own venture called Gobinda Dhupakathi Cluster in 2012. She mobilised ten women from the surrounding villages, trained them and started making agarbattis with hands. ORMAS also helped and tied her cluster with ITC, which would buy from her venture.

Since then, there has been no looking back for Jangyaseni. She bought two automatic machines to make agarbattis herself, and now employs 20 women directly and 50 women indirectly. Currently, her firm has a turnover of Rs 10 lakh and a capacity to produce 100 kgs of agarbattis a day. This Laxmi Puja, she also plans to launch her own agarbatti brand called Kalashi.

After losing her job at the self-help group, Jangyaseni had no one to fall back upon. In 2011, she bought a cow with her savings and started selling milk to the households in her neighbourhood. She says, “I knew the households in my neighbourhood were tired of the reckless adulteration of milk done by local milk vendors.”

As Jangyaseni started providing milk to households without resorting to any malpractices, her list of clients grew and the business expanded to such an extent that by the end of the year, she owned 10 cows. According to Jangyaseni, this did not go well with other milk traders in the area. She claims they conspired against her and killed five of her cows, which ultimately led to the end of her business.

As has been famously said, “When one door closes, another opens,” Jangyaseni’s previous experience of working in a self-help group was set to open another door of opportunity for her. She then met officials from ORMAS, which changed her life entirely. And, as they say, rest is history.

Jangyaseni now receives orders for her products from the neighbourhood and the surrounding areas. Apart from this, she displays her products at exhibitions all across Odisha during occasions like Baliyatra festival, Vishwakarma Puja, Laxmi puja and Dussehra in Cuttack. In the near future, she plans to sell her products via retail shops too.

Jangyaseni says she wants to expand her production as there is a lot of demand for her products. But since 2016, the government has stopped providing training to women free of cost. Hence, she is currently facing a shortage of skilled women workers, inhibiting her from expanding her production. “I lack the funds to train the women on my own,” she says.

Despite many challenges, Jangyaseni says she gathers strength from seeing the impact of her work. She says,

“My heart fills with pride when I see those same women, who once were shy of doing any work for income, fighting for Panchayat Elections.”

Jangyaseni is of the belief that financial independence truly empowers a woman. She adds, “Women in the society enjoy no respect. Enabling them to earn an income while staying at home has helped them gain self-respect and a say in household matters.”

She wants the women to adopt “Ekla Chalo Re” (If no one responds to your call, then go your own way alone) attitude in life. She says, her journey was also not easy. “When a women leads, does something on her own, nobody accepts it. They are often sidelined. I want to tell the women that they are no less than men. They have a lot of power. They should realise their power and put it to use.”

In the future, Jangyaseni wants her brand Kalashi to come at par with ITC’s Mangaldeep agarbattis. She also wants to employ 1,000 women in her company and dreams of owning a shop selling only her products.