With a boom in EV market, this is how Neuron is eyeing a Rs 100cr turnover within 4 years 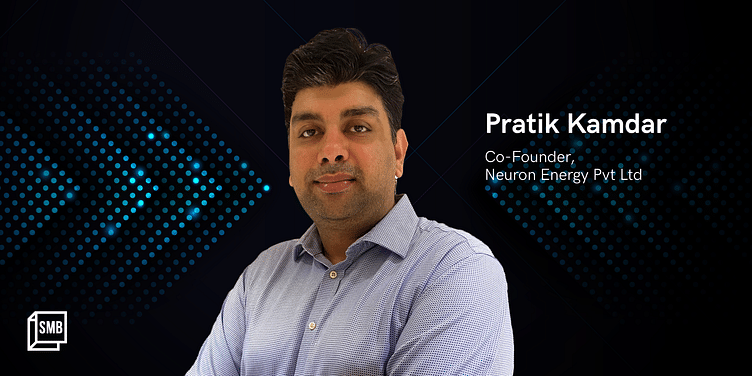 Neuron Energy was started by Pratik Kamdar and Raj Shah in 2018 to be a part of the rising EV market in India by producing Lead-acid batteries. In 2020, they forayed into making Lithium-ion batteries and now has a Rs 100 crore order book in hand.

India was not buying EVs until recently. Till about 2017, to most Indian consumers, EVs didn’t strike as a strong buy, says Pratik Kamdar, co-founder of Mumbai-based ﻿Neuron Energy﻿. His company supplies lead-acid and lithium-ion powered batteries to electric vehicles.

This sentiment has changed, atleast in the last few years. Growing awareness about environmental issues, availability of subsidies and tax rebates on buying EVs has peaked consumer interest. On the occasion of World EV Day, SMBStory spoke to Pratik to speak about the EV market’s promise and Neuron’s role in it.

“When we started the business in 2018, there were 6,000 EV two-wheelers in India. Last year, there were six lakh EV two-wheelers running on the road and this year there are sales of around 15 lakh of these in the market. So, this means, we will see 50% conversion by 2030,” says Pratik, on the growing demand for EVs in India.

The EV market is expected to grow at a CAGR of 94.4% from 2021 to 2030. According to Pratik, the initiatives of the government to incentivise manufacturers and consumers adopting EVs, rising fuel prices, and stringent greenhouse gas (GHG) emission norms have also contributed to the growth of the EV sector.

The story begins in 2017. Pratik, along with his childhood friend Raj Shah (co-founder) began making lead-acid batteries for two-wheelers, three-wheelers, and golf carts. Pratik and Raj invested around Rs 4 crore to start the business.

“The lead-acid battery market had already reached an adult stage and there was not much to do in overcoming market competitiveness. The market was established, but lithium-ion batteries were new in the Indian market then. There were a very few but large players making a mark for themselves,” says Pratik.

Neuron saw a huge potential in lithium-ion batteries then as they have a much higher energy density and are greener than lead-acid and nickel-cadmium (NiCd) batteries. So, they forayed into this segment two years ago. Today its lithium-ion batteries are made through contract manufacturing in Pune and Noida.

According to Pratik, while demand isn't an issue, supply is a matter of concern. This is because India is dependent on import of cells which are used in making batteries.

“The demand is high but also erratic. Sometimes there’s a 50% hike in demand while other times we have experience as low as 30% dip. Since we are dependent on the global supply chain, this is a big challenge but we are expecting to overcome this once the domestic supply chain is streamlined,” says Pratik.

Last year, the Indian government approved a production linked incentive scheme with an outlay of ₹18,000 crore to promote manufacturing, export, and storage of lithium-ion cells. The government has also allowed FAME (Faster Adoption and Manufacturing of Electric vehicles) subsidies only for lithium-ion.

Then, there is the concern of fires. The composition of these lithium-ion makes them prone to high temperatures, making them inherently flammable. In a country like India, this can be tricky to execute correctly.

To match the expectations of customers and offer cheaper alternatives, companies began using second-grade or B-grade cells. “This has raised many eyebrows and impacted businesses like us,” says Pratik. To ensure that cells that are of sub-par quality are removed, Neuron conducts cell grading.

Neuron sells LFP (lithium iron phosphate)/NMC (nickel-manganese-cobalt oxide) chemistry batteries for EV two-wheelers and three-wheelers. It is also one of the few companies that uses a microprocessor based battery management system for efficient and smart utilisation of batteries other than the generally used Mosfet.

Neuron ensures the battery pack is IP67 rated (can wade through small bodies of water or slightly flooded roads). All L5 (cargo rickshaw vehicles) category packs have been installed with a pressure valve. Many of the above safety features are now mandated by the government in its new policy, says Prateek.

Neuron has a big kitty of clients for both its two-wheelers and three-wheelers batteries. This includes the likes of Kinetic Green, YC Electric Vehicle, 3evi, e-Ashwa Automotive etc, including smaller OEMs as well.   From having a presence only in Mumbai, Neuron now has multiple depots and distributors across India. It has also increased its export footprint to the Middle East, Europe, and South-East Asia.

As of now, India currently depends on other countries for cell manufacturing. and is planning to source lithium from across the globe to ensure raw material supply to cell manufacturers in India

“It’s difficult to predict cost reduction in the future. Localised supply chains will be way more reliable than a global supply chain. However, cell cost is significantly dependent on lithium commodity pricing. The pricing is likely to reduce once more lithium mines are active,” says Pratik.

“When computers were introduced in the 90s, the market in India was opening up. We used to experience systems hanging, storage not being optimum, and various other challenges. With developments, these challenges have vanished. The same is happening with the EV revolution in India. With time, technology development, and more active mines, we can overcome the current challenges of production, development, and supply” says Pratik.

What’s next for Neuron?

“Since the ecosystem for EVs is developing, in the near future we are trying to build service centers pan India and ensure remote repair and remote assistance by building robust and strong command centers,” Pratik says, talking about future plans.