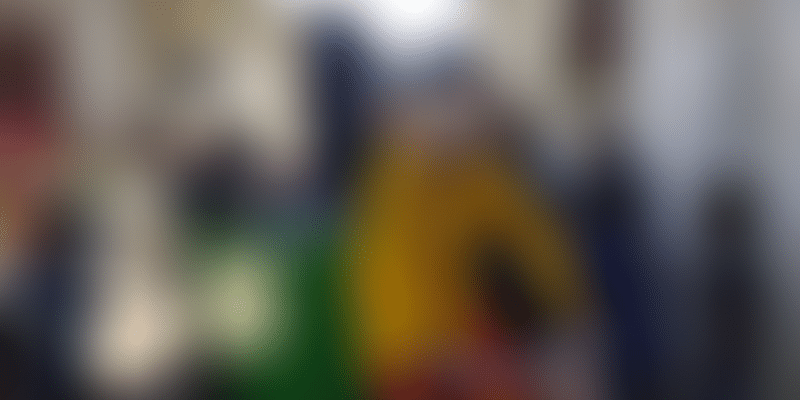 A group of student volunteers with the support of an NGO have made Ambapur village a clean and green haven by implementing an effective waste disposal system, called BlueGreen Initiative.

Just a couple of months ago, the village of Ambapur near Gandhinagar, Gujarat, was drowning in garbage. Mounds of waste could be spotted in and around the lakes and on barren lands. Animals feeding on plastic, and trash burning around street corners were a common sight. And the rotting trash had led to the degradation of soil as well as the groundwater below it.

Today, Ambapur paints a different picture. It is pristine, and its natural habitat is intact. A group of student volunteers along with the support of a non-profit organisation made this possible by conducting awareness campaigns at the village, helping set up a door-to-door waste collection system, and implementing composting and recycling solutions.

While the VAVO--a drive by college students--team of volunteers got the ball rolling by putting together BlueGreen Initiative, an appropriate waste collection and disposal system, NGO Need Box Foundation helped raise over Rs 1.5 lakh for the initiative by raising a crowdsourcing pitch on their web platform.

“This joint effort has brought about a wave of positive transformation in the way people live in Ambapur. They have become mindful about waste disposal and do not litter their neighbourhood anymore, thereby protecting their immediate environment as well as the health of the people,” says Kinjal Shethia, Co-founder, Need Box Foundation.

Ambapur was a place that was choking with heaps of plastic waste, and VAVO volunteers devised a plan of action to kickstart their waste management drive there. The total geographical area of Ambapur is one sqkm and the village houses close to 4,000 people. The density of population in this small space, and their indiscriminate disposal of waste had led to the dire state of the village.

Need Box Foundation, which crowdsourced the funds for the Ambapur project, was established in 2018 in Mumbai by siblings Kinjal Shethia and Vinit Shethia to help along social projects by raising funds and garnering technical expertise. They stumbled upon this idea when they realised that many community welfare causes failed to create an impact merely because of lack of financial resources.

VAVO, on the other hand, came into being when a group of students from LDRP Institute of Technology and Research in Gandhinagar started an initiative to enhance the green cover of the city by planting trees.

“Initially, we were all working closely with the government’s Swachh Bharat mission as part of a college project. However, we decided to continue our efforts beyond an academic requirement. VAVO, which means ‘planting’ in Gujrati, consists of about 20 active volunteers at present,” says Deep Bhuva, Project Lead, VAVO.

Need Box decided to collaborate with the VAVO group of volunteers when they met at a public discussion forum in Mumbai. “We heard about the work VAVO was doing in the Gujarat Industrial Development Corporation (GIDEC) area at Naroda, Ahmedabad and were quite impressed. They had planted around 1,500 trees there in a span of few days. They pitched the idea of implementing zero-waste management drives across the state and we were determined to support it,” Kinjal recalls.

Also read: How this waste management company addresses challenges in the sector by making entrepreneurs of waste pickers

The efforts put in place

BlueGreen initiative kickstarted in February 2019, and was divided into three phases. The first included awareness sessions with all the residents of Ambapur on the importance of waste management, segregation of dry and wet waste as well as the perks of mulching and recycling. “The village has about 520 households. We had to huddle up with them and make them understand the scientific waste disposal methods. It was challenging,” notes Deep.

The second phase included the distribution of two dustbins to each household. A blue-coloured one for dry waste, and a green one for wet waste. In this way, all the people were requested to segregate household waste at the source.

“When it came to collection of segregated waste, we implemented a door-to-door collection system. With the help of the local panchayat of Ambapur, we asked one of the rag-pickers in the area to go to each house every other day and pick up the waste. He would pile the dry and wet waste separately and further segregate all the plastic and paper from the dry trash,” Deep explains.

The final phase of the BlueGreen Initiative consisted of setting up compost pits at convenient locations, and also tying up with Recycled Green, a recycler. The rag-picker would dump all the wet waste at these compost pits, and store the plastic trash to be picked up by Recycled Green. The segregated paper waste was redistributed to some of the households where women would be willing to make paper bags from them. Recycled Green would later sell these paper bags and give a percentage of the proceeds to the women. In this way, the goal of creating a zero-waste village was accomplished.

“Since the local panchayat was very supportive, they brought in a rule where a penalty of Rs 500 was levied on the households that failed to segregate waste. These penalties were levied based on the surprise checks conducted by the volunteers once a week,” Kinjal says, adding that such weekly checks will be continued for a year, after which the frequency of the checks will be reduced.

Also read: At this Goa's all purpose zero-waste store, one can buy anything but plastic and non-organic products

Creating a cleaner and greener space

The BlueGreen Initiative has resulted in Ambapur becoming a clean and sustainable area.

“I have been living in Ambapur for the last 24 years and have never witnessed this kind of tidiness. There was so much waste thrown around everywhere that it had become a breeding ground for mosquitoes. People in my neighborhood used to fall ill often either due to malaria or dengue. I am glad all of this has vanished now,” says Sachin Patel, resident of Ambapur village.

Tushar Bhaila who works at a textile processing unit in Ambapur no more sees trash around lakes. “Several fish and other animals used to die eating the plastic waste dumped in and around the water. This will definitely not happen anymore since the entire village is not only throwing all the waste that is generated into dustbins, but also segregating them,” he says.

Kinjal is of the view that the BlueGreen Initiative can be replicated by villages across India since it a simple and cost-effective model. “Many rural areas in the country are choked because of irrational dumping and burning of waste. This tried-and-tested model is sure to make a difference if implemented. And, we have already taken the next step in this regard. Our foundation along with VAVO is now all set to take the BlueGreen Initiative to many villages close to Rann of Kutch,” she says.