Sensitisation, safety, and sustainability: how Jharkhand is breaking the taboo around menstruation with its Garima Fauj 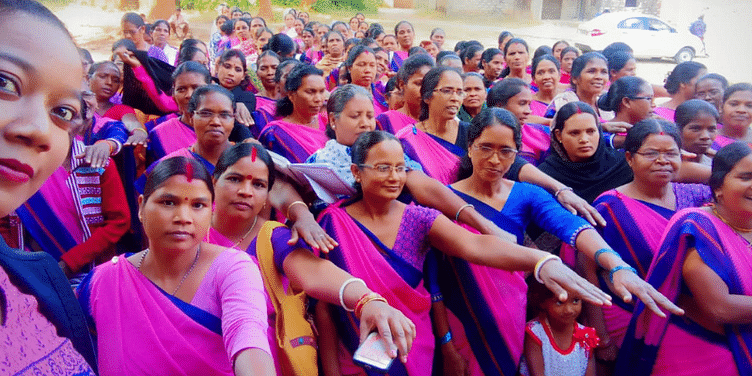 The Garima Abhiyan - a district-wide campaign launched in Simdega district, Jharkhand - is breaking the taboo associated with menstruation by providing its residents with eco-friendly sanitary napkins.

In several parts of India, the topic of menstruation brings with it the associated baggage of stigma, and shame. According to a report by WaterAid, 70.9 percent of Indian girls were unaware of what was happening when they got their first period.

Schools shy away from teaching students about it, social circles close their doors to the topic, and families maintain radio silence. This has resulted not only in the creation of myths and misconceptions, but also in unsafe and unhygienic practices. It is precisely this taboo that Garima Abhiyan - launched in the Simdega district of Jharkhand - tackles through its Menstrual Hygiene Management (MHM) awareness campaign.

The campaign is spearheaded by Satwik Mishra, Simdega’s District Fellow under the Ministry of Home Affairs’ Transformation of Aspirational Districts Program (TADP). Launched in September 2018, it spanned over five months and addressed key issues related to menstrual health in a bid to sensitise both men and women across all ages. The administration collaborated with the WSSCC (Water Sanitation Supportive & Collaborative Council), a United Nations agency, which provided them with knowledge and logistical support.

A Unicef report from 2017 shows that 88 percent of menstruating women in Jharkhand and Bihar were unable to access sanitary napkins. Using old cloth, which hasn’t been properly washed or dried, can cause major health problems. However, these issues are swept under the carpet as people are unwilling to talk about them.

“We wanted to break the taboo around this issue,” explains Satwik. “We wanted to involve everyone in the community, irrespective of age and gender, so that they become more willing to help and take action.”

With the help of over 3,000 front-line workers, the team reached out to 774 schools and 964 anganwadis across all the villages in the district.

Also read: Menstruation and the workplace: Women talk about the problem and need for inclusion

Planting the seeds of change

Sponsored by the contingency fund of the social welfare department, the Garima Abhiyan was organised in three phases. In the first phase, 65 frontline workers were trained by members of the WSSCC. These workers belonged to various departments such as education, social welfare, and health.

During the first phase of the campaign, WSSCC members shared charts and videos with frontline workers to answer their queries about menstruation. Before they ventured into various villages of the district, the trainers were encouraged to first break the taboo within their own circles. They were asked to share stories about their first period experience with their fellow trainers. Though hesitant in the beginning, one by one, women came forward and broke their silence. They were later joined by men, who spoke of their mothers and sisters who tended to keep mum about their period.

In the next leg, these 65 trainers went on to coach over 3,000 other workers. Workshops were conducted in hundreds of anganwadis and schools during the third phase. Out of all the trainers, about 450 were chosen to form the ‘Garima Fauj’ and oversee village level workshops across the district.

“The main hurdle was that the administration initially did not consider MHM awareness campaigns to be of importance,” says Satwik. “Things like building toilets were higher up their priority list. It was this mentality that needed to be challenged first,” he adds.

Once the three phases were executed, the administration shifted its focus towards ensuring the availability of eco-friendly and hygienic napkins. The aim was to create a product that would be free of chemicals and plastic, so as to reduce pollution while providing a comfortable and sanitary alternative.

A group of women from Self-Help Groups (SHG) were trained in stitching these cotton napkins by members of Jatan, an NGO based in Udaipur. The napkins come in four varieties and are priced between Rs 30 and Rs 50. Each napkin takes about 10-15 minutes to stitch and can be reused up to a year. The local production unit plans to market these napkins under the name of ‘Miss Garima Sanitary Pad’.

From silence to speech

“While I always knew what menstruation is, I didn’t really know that it is part of a cycle. I didn’t know why it begins, or how it ends,” confesses Sapna Sanyasi, one of the frontline workers who was trained in creating awareness by the WSSCC authorities. Currently working as a superintendent at an observation home, Sapna was a former employee at the Pratham Education Foundation. It was here she learnt about the opportunity to be a part of Simdega’s MHM drive.

“During our training sessions, we learnt there were a number of men who had no idea what the women in their families go through when they are on their period,” she says. “Now that the taboo is starting to break, they are able to talk openly about the issue, and are capable of providing support and help when needed.”

Twenty-eight-year-old Sapna believes that “open communication” is one of the highlights of the Garima campaign. That women and children in schools are now equipped with scientifically accurate information is another objective that has been achieved.

Sustainability: the way ahead

“Mainstream MHM strategies are proving to be quite problematic because they promote the usage of chemical laden products that require incinerators for disposal,” says Satwik. “We need to think about sustainable approaches before it is too late.”

The administrators plan to expand production so they can distribute their eco-friendly napkins to a greater number of consumers. The campaign will be re-launched annually to ensure that its impact does not diminish in any way. With time, they also plan to scale up the project to a state level programme. The success of the Garima campaign in Simdega has encouraged other districts in Jharkhand like Latehaar, Bokaro, and Mujjafarpur to follow suit.

Also read: Menstruation and the workplace: Women talk about the problem and need for inclusion