For distressed farmers of Telangana, help is just a call away with Kisan Mitra 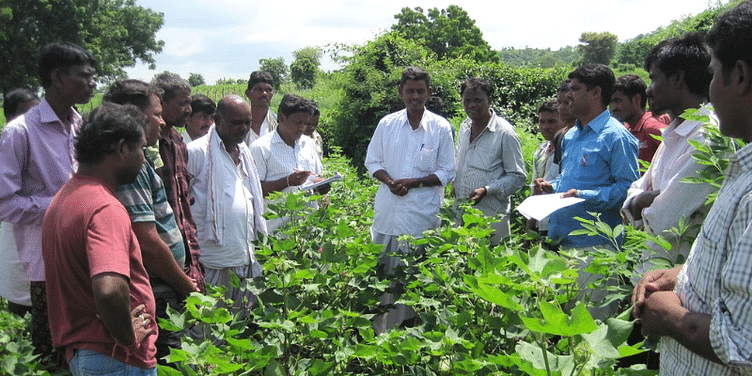 Kisan Mitra, a not-for-profit organisation, establishes an economically stable future for distressed farmers in Telangana by counselling them and acting as a bridge between them and the government.

Since the formation of Telangana as a separate state, farmers in the rural regions of Adilabad, Mancherial, and Vikarabad have been under a lot of financial distress due to floods and the destruction of crops. Due to this, it has been reported that many farmers are suffering from depression and have ended up committing suicide.

Kisan Mitra was set up in 2017 in order to help these distressed farmers. The not-for-profit organisation acts as an intermediary between the farmers and the government, and ensures farmers receive their entitlement according to the monetary schemes enlisted to them. The organisation also ensures farmers don’t borrow money from moneylenders as they charge exorbitant interest rates.

Also read: This school in Assam accepts plastic waste as a fee, creating environmental awareness among the local community

According to The Hans Media, Telangana has been ranked second for farmer suicides for two consecutive years since 2013. According to a report from the National Crime Record Bureau (NCRB), around 1,358 farmers committed suicide in Telangana in 2015, whereas the neighbouring state Andhra Pradesh witnessed about 561 farmer deaths the same year.

On Kisan Mitra, Harsha, one of the founding members of the organisation, told The News Minute and said:

“We ensure the entitlement from the government reach the farmers on time. For this, we begin by creating awareness about the government schemes, what the viable means of investment are, and also the insurance, which most farmers have least knowledge about.”

From legal and agricultural issues to personal problems, the members of the trust make sure they are always available to help farmers solve their problems. The trust also has a department that handles distress calls by farmers who are depressed. Farmers can also contact them on WhatsApp to avail help.

This is where Shruti N, a psychologist, and her team of all women counsellors, along with two other male coordinators are trying to make a difference. Many other volunteers from the NGO have also come forward and visited the farms situated in remote areas to help farmers resolve their problems.

Also read: How to plant a forest in one year: these Karnataka govt school students show the way

Harsha says, Kisan Mitra has so far received 9,000 distress calls, of which 5,000 calls have been addressed. The remaining calls are still pending as it needs government intervention, he explains.

Shruti says, ignoring their mental state is one of the main reasons behind farmer suicides.

“Most of the farmers do not have any persistent mental health issue or depression, which may evoke suicidal tendencies. They are circumstantial sufferers. Life struggles corner them into a helpless situation. The thought of making his family and children suffer is too difficult for him at times,” she tells EffortsForGood.