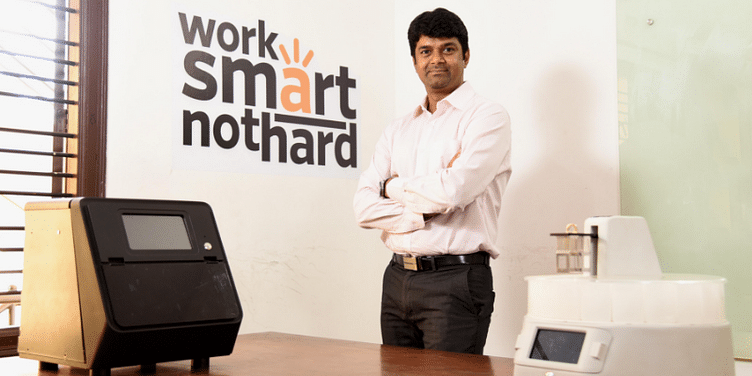 Started in 2012, Aindra has developed a point-of-care apparatus called CervAstra. The device can identify cancerous cells within a short period of time, with minimal human intervention.

A staggering 43 crore women in India are above 15 years of age. This means they are constantly exposed to the risk of developing cervical cancer. Well, let’s break it down for you.

Every year, around 1.2 lakh women get diagnosed with cervical cancer, but only 45 percent of them manage to survive. According to the Indian Council of Medical Research (ICMR) and the National Institute of Cancer Prevention and Research (NICPR), one woman dies due to the disease every eight minutes in India.

And some of the main reasons for the low rate of survival can be attributed to the delay in diagnosis, the high cost associated with the detection of cervical cancer, and the general lack of awareness about the nitty-gritty of the ailment.

Aindra, a Bengaluru-based startup, is now attempting to resolve this problem through an Artificial Intelligence (AI)-powered device called CervAstra. The innovative device banks on the pap smear test, and works as a point-of-care apparatus that can be deployed to identify cervical cancer at a low cost.

Founded by Adarsh Natarajan (40) in 2012, the startup has successfully helped diagnostic centres and laboratories screen 700 women using this device across rural areas in Karnataka.

Speaking about CervAstra, Adarsh spoke to YourStory and said:

“India has been lacking in many fronts when it comes to the cervical cancer space, especially in rural areas – right from lack of infrastructure, shortage of pathologists and medical professionals to other systemic constraints. We, at Aindra, have harnessed technology to come up with a solution for this. Our device, CervAstra, enables the identification of cancerous cells within a short period of time with minimal human intervention.”

The screening and detection of cervical cancer in rural India is both tedious and expensive - right from visiting the local gynaecologist, giving the samples to a diagnostic centre, and waiting for the results of the test. This entire process takes about six to eight weeks, and costs nearly Rs 2,000.

The CervAstra device simplifies this whole procedure by using two components – an autostainer and an image magnifier called VisionX. These are built using an AI-based computational pathology system driven by a set of algorithms.

“Since both these components are quite compact, they can be installed at the gynaecologist’s clinic. Hence, anybody who wants to get tested for cervical cancer need not go to a diagnostic centre as such. They have the option of submitting their samples at the clinic itself. While the autostainer dyes the sample, VisionX scans the same and converts it into an enlarged digital image. The microscopic picture is then analysed using algorithms to determine whether the cells are normal or cancerous,” explains Adarsh.

By using Aindra’s device, both operational time and cost surrounding logistics is minimised. The entire process, in this case, takes only an hour and a half, and costs half the market rate.

According to Aindra, it took about three years for the team to design and develop CervAstra from scratch, considering the amount of research and technical expertise involved in it. While some of the units of the device had to be bought off the shelf, others were produced and assembled by an external manufacturer.

“We have already received an ISO certification for the device, and are presently in the final stages of validating it. Aindra has also entered into contracts with a set of potential customers including pathology labs and oncology centres across Karnataka. The device has been scheduled for launch at the end of this year, and we are expecting to sell 3,000 to 5,000 units,” says Adarsh.

Cancer, known to be one of the most chronic and deadly diseases ever, is a leading cause of death worldwide. Early diagnosis increases the chances of a successful treatment leading to survival. However, when it comes to lower resource settings and vulnerable populations in India, there tends to be a delay in screening due to inaccessibility and the hefty cost associated with it.

Aindra’s device offers a point-of-care system to detect cervical cancer in a quick and inexpensive manner.

“The CervAstra device is extremely easy-to-use and provides timely results. One of its biggest benefits is that it eliminates the need for human intervention considering India is presently facing a severe crunch in availability of qualified lab assistants and pathologists. Since the device analyses biological samples and immediately points out all the abnormalities, it makes early diagnosis possible without any hassle. I have myself seen several women come to me with an advanced stage of cervical cancer - Stage 3 or 4. By using Aindra’s device, there is a high possibility of these kind of cases decreasing,” says Dr Vani Ravikumar, Head of Lab, RV Metropolis Diagnostic and Healthcare Centre.

Aindra has already screened over 700 women for cervical cancer across both rural and urban areas of Karnataka like Tumakuru, Chikballapur, and Bengaluru.

“Thousands of women die due to cervical cancer in the country every year. Since CervAstra can identify cancerous cells in an accurate and quick manner, it has the potential to save these lives,” notes Adarsh.

Adarsh was working in the Information Technology domain for over a decade before he took the plunge to study further at Indian Institute of Management, Bengaluru. During the course of his education, he happened to start working with the Centre for Public Policy, Government of India.

He entered into a public-private partnership (PPP) with them to develop AI-based models in the areas of financial fraud detection and risk mitigation. This marked the establishment of Aindra in 2012.

“As I began work, I realised the immense power and potential of a deep technology like Artificial Intelligence (AI) and Machine Learning (ML). Over a period of time, I understood that these concepts, if implemented, will have the capacity to transform the Indian healthcare space. One day, I was looking at a couple of statistics and came across a set of dismal numbers with regard to the cases of cervical cancer reported in India. I decided to do something to make a difference,” Adarsh recollects.

Aindra has received a round of grants from Millennium Alliance, an inclusive platform set up by the Indian government in collaboration with the US and UK governments, as well as the Biotechnology Industry Research Assistance Council (BIRAC), a not-for-profit public sector enterprise. The Indo-US Science and Technology Forum (IUSSTF), an autonomous bilateral organization jointly formed by the Indian and US governments also pitched in with some grants.

The startup even garnered some funds as part of the Idea2PoC initiative launched by the Government of Karnataka. In 2015, Aindra was incubated and mentored by the social enterprise incubator Villgro.