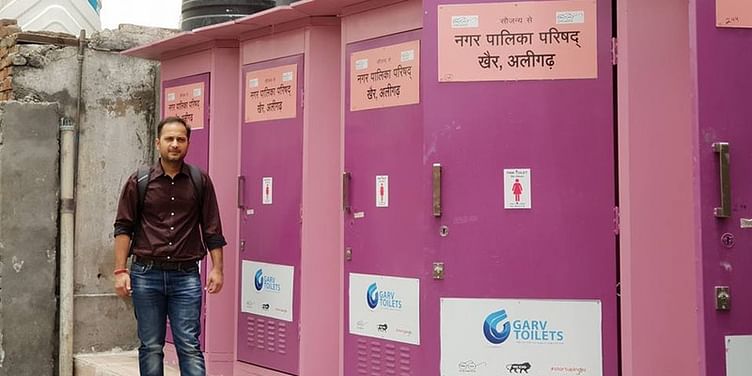 For decades, several individuals and governments have tried to make India an open defecation-free nation, and the work is still in progress.

To give you an insight, about 2.3 billion people across the globe do not have access to basic toilet facilities. In India, this number is about 600 million, of which five million urban slums belong to urban slums.

Since the Narendra Modi government started the Swachh Bharat initiative in 2014, basic sanitation facilities like toilets have been made available in rural and metropolitan cities. However, these toilets may not be of much use, as they are often poorly maintained and vandalised.

Founded in 2017 by husband-wife duo Mayank Midha and Megha Bhatnagar Midha, GARV Toilets has built 721 toilets in India. It has also made an impact across four other countries, including Ghana, Nigeria, Bhutan and Nepal.

These public toilets are IoT-enabled and are integrated with solar panels, battery packs, auto flush, floor cleaning technology, and biodigester tanks. While these toilets are user and disabled-friendly, meaning they come in Western and Indian style , the entire structure is portable and vandal-proof.

Speaking to SocialStory, Mayank says, “If a customer like an NGO or CSR group needs only one or two toilets to be built, then the entire set-up can be finished in a couple of hours. Besides, unlike conventional toilets, our toilet doesn’t use any electricity; it's completely renewable. In fact, we have reduced 102.4 tonnes of CO2 annually.”

An electronics and communication engineer, Mayank got insights on the sanitation issues plaguing the nation while he was pursuing his MBA degree in rural management from Institute of Rural Management Anand.

Mayank says, “A large part of my career has been in the manufacturing domain. I was working with Airtel and Telenor, where we were delivering telecom equipment like BTS cabinets, which resembled toilet cabinets.”

Mayank, being aware of the issues related to Indian public toilets, wondered if this telecom equipment could be made into metal structured toilet cabinets.

So, in 2014, Mayank and with his wife initiated the project of building sustainable public toilets fabricated from metal. In 2015, GARV Toilets was registered and they prepared a pre-fabricated toilet structure and invested Rs 10 lakh in the company.

Like many startups, the duo faced several challenges ranging from high cost of the entire structure to convincing customers to buy them. They did not get any help from the government and NGOs in the initial two years.

Mayank adds, “We tried convincing them that the models could be scaled rapidly. These toilets can be produced out of a factory with nearly 300 units per month, instead of hiring a contractor, who would take nearly six months just to build the toilet. In the long run, the cost of producing smart toilets would match the cost of operation, whereas the maintenance cost of a conventional toilet would remain high at any given time.”

The duo also faced problems integrating the technology in their product and the design, as they wanted a simple and easy-to-use setup.

In2017, the duo carried out a pilot project with the city’s municipality but things didn’t work out as the corporation wasn’t scaling the operations. This led the team to pitch their concept for CSRs.

The same year, the enterprise was inivited to Patna by a foundation to help them in a government school, where the basic setup was installed without the IoT-based applications. The entire project was funded by Coca-Cola; more than 18,000 students are using GARV Toilets in Bihar and Delhi today.

“Our motto is also to promote hygiene practices among the people. When we visited the school premises, the authorities informed us that students were now showing more interest in attending classes because of the safe sanitation installations. In fact, the dropout rate among students had gone down drastically.”

The number of toilet installation shot up to over 700 in 2018, out of which 358 toilets were of basic design with no integrated electronics.

Talking about the design, Mayank says,

With the help of IoT-enabled toilets, Mayank’s team can analyse user behaviour such as flushing the toilet, washing hands, or if someone is vandalising the setup, and enhance services.

Mayank says, “The system setup also enables the team to get to the issue as it sends out an image of the faulty area.”

In terms of saving natural resources, the toilet uses only two litres of water or less, as compared to conventional ones which use five to six litres. This is also because the entire structure is made of stainless steel and doesn’t need any chemicals to clean the surface.

Currently, the enterprise is working in a slum near Faridabad where a family of four can pay Rs 250-300 per month to use the facilities. Mayank’s team monitors the sanitary behaviour of these slum dwellers. According to Mayank, this is important for NGOs who have tied up with GARV Toilets, as they are promoting safe and hygienic sanitation solutions.

The team has also worked with the Netherlands government who sponsored Mayank’s project in Ghana. Here, GARV Toilets built two toilets as part of a pilot project to see the impact and how the locals perceived it.

Mayank adds, “We have also worked with the Nigerian and Bhutanese government, and recently got an order from the Uttar Pradesh government to build GARV Toilets under the Swachh Bharat Mission.”

The support, team, and the future

To get further support, GARV Toilets received its first seed investment not grant + mentoring support from INVENT. In the same year, the team also won few grants to support its work.

Currently, GARV Toilets has six members in its core team, including Mayank, Megha and Neha. The non-core team has 27 members. The company hires some through a contract basis and some through job portals. It has signed long-term maintenance contracts where, apart from installation, it will also maintain toilets and generate revenue.

Mayank says, “We have started a project with the Delhi Metro Rail Corporation, where we will install toilets that will later be integrated with metro cards, enabling users to access these toilets."

In terms of generating revenue, the outer walls of the toilets can be used for advertising.

The company also plans to build a subscription-based model where users can buy a plan to use the facility. In addition, GARV Toilets will also install a drinking water ATM outside its toilet for people to use.

Meet the engineer who quit his job and planted over 40,000 trees in 14 years

5 foreign films set in the backdrop of British-ruled India