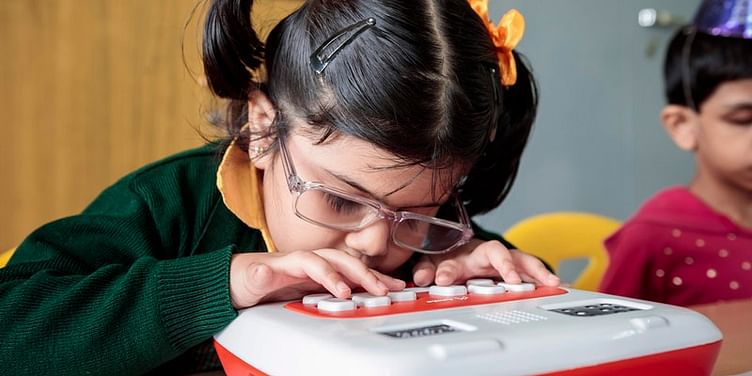 At Rajyakrit Netrahin Madhya Vidyalaya, a school for the visually impaired in Ranchi, there are 24 students - aged between six and eighteen. They were being taught Braille for about 60 minutes every day by two teachers. This means that a student would receive only five minutes of personal attention, and the rest of the time was spent either waiting or attempting exercises. This teaching method was clearly inefficient, and a waste of productive time for both teachers and students alike.

For many years now, Braille has empowered the visually impaired in many ways, but with some hand-holding from a teacher or some other external agent. However, the problem with having to learn from an external agent is that students will not be able to learn confidently on their own.

Identifying this problem and with a belief that Braille is a very self-learning process led to the birth of Thinkerbell Labs in 2016. A project of BITS Pilani called ‘Project Mudra’, Thinkerbell Labs was started by Aman Srivastava, Saif Shaikh, Sanskiriti Dawle, and Dilip Ramesh.

This autorickshaw equipped with drinking water and mobile charging points has impressed Twinkle...

The Bengaluru-based startup makes Braille literacy devices for the visually impaired to help them learn Braille on their own. It’s flagship product Annie helps in early schooling of visually impaired students with its gamified audio lessons over a Braille-based hardware.

With nine members in the team at present, the startup has raised a total of Rs 3.4 crore in seed funding so far from the likes of Anand Mahindra, LetsVenture, and Indian Angel Network.

Thinkerbell’s Annie got its name from Helen Keller's teacher Anne Sullivan. It is a device specifically designed to solve the pain-point of low Braille literacy rate among the visually-impaired by helping them learn how to read, write, and type in Braille.

The typing follows a universal design based on the standard Braille script. The output is then digitised, making the feedback loops quicker and evaluation easier. The content for learning is curated enough to make it suitable for all age-groups, and the medium of instruction is not limited to any language, but also extends to accents like the UK English and US English.

How this 22-year-old is providing free supplementary education to children in villages of Tamil...

The startup claims the hardware modules are tactile in nature, coupled with a soft human voice to guide the students through lessons, which eliminates the need for hand-holding and constant supervision. Most of the visual aids are designed assuming the users are Braille literate.

In an earlier interview with YourStory, Aman said,

We have made the overall process of Braille learning more innovative and efficient through a combination of our hardware, software technologies, and our content. We enable one teacher to teach more than one student simultaneously. Our technology can also be used by individual users to learn Braille by themselves. The gamified audio-based lessons we deliver can be used to kickstart further education of the user.

Jeevika, a Braille learner at Bengaluru’s Jyoti Seva Home for the blind, says,

It is very interesting to play and to learn reading, writing, and typing on Annie. It helps me to know more about Braille, and I love the commands. It encourages me a lot.

Thinkerbell Labs was formerly called Project Mudra, which was an independent research project at BITS Pilani campus in Goa. When Sanskriti and Aman built a Braille alphabet song box on the low-cost microsized computer Raspberry Pi, they stumbled upon the idea for Annie.

As a one-time setup cost, the startup charges Rs 9 lakh from the school or the institution that it collaborates with. Under this deal, the team facilitates the installation of the device, the hardware and the infrastructure. The district collectorates of Karimnagar and Mahabubnagar (Telangana), Ranchi (Jharkhand), Jashpur (Chattisgarh), Tech Mahindra Foundation, LV Prasad Eye Institute, SELCO Foundation, the Poona school for the blind (Pune), and many other institutions are using the device as of now.

Validation for the future

After being awarded the Great Tech Rocketship by UK Trade and Investment (UKTI) in March 2016, Annie was showcased to Prince William and Kate Middleton, the Duke and Duchess of Cambridge. The royal couple was on an India tour that year, and when Kate Middleton learnt to type out ‘George’ in Braille, Annie came to the spotlight.

After Annie was received with great enthusiasm and fervour, Niti Aayog, the policy think tank of the Government of India, has recommended all the district collectors across the country to replicate this solution at government schools. The National Institute for the visually impaired has also certified that Annie is a competent Braille teaching device.

Focusing strictly on the business-to-government (B2G) segment, Thinkerbell Labs is now actively reaching out to all district administrations and state heads for active collaboration.

The larger and broader vision for Thinkerbell Labs is to make education inclusive, and extend it to other learning disabilities in the future. Though the focus is now exerted on overall brain literacy, the team is now working towards ensuring a student’s journey through the entirety of K-12 with an Annie smart class.

Meet the Class 12 students who are developing an app to make mental healthcare accessible and a...