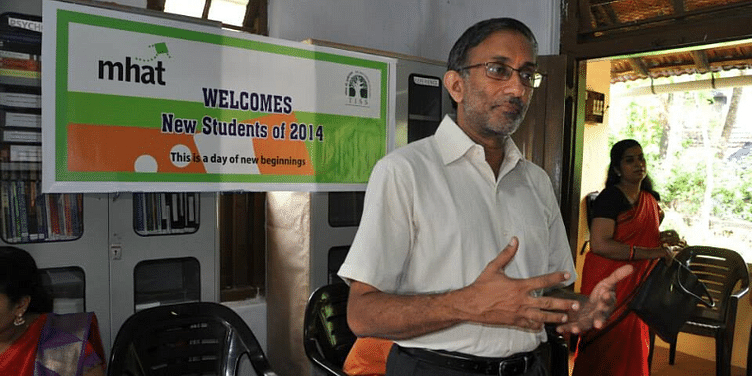 Dr Manoj Kumar has created a free, comprehensive, community-based, and volunteer-led mental healthcare system to cater to the most economically backward groups of society. In doing so, he has paved the way to a meaningful and productive new life for these individuals.

Over the course of the last decade, mental healthcare has become a focal talking point among planners, medical professionals, administrators, and the general public. In India, the introduction of a National Mental Health Policy in 2014, along with the District Mental Health Programme (DMHP) which has been in place since 2016, has provided glimpses of hope for a robust and inclusive system of care.

Despite the introduction of this policy infrastructure, the on-ground realities as far as access, quality, and affordability of services go have been abysmal across the country. Even though the DMHP has managed to cover over half the districts across India, and most medical colleges and district hospitals now have psychiatric wards, there still exists an overwhelming 70 percent gap in treatment.

The primary pain points behind this gap is the logistical and geographical barriers that exist, with patients having to travel long distances to access psychiatric treatment at any of the 43 large district mental health hospitals. A majority of the limited number of trained medical professionals are clustered in urban areas. Even if these barriers are overcome, most patients are treated in overcrowded outpatient facilities that are devoid of privacy and quality care.

It was to address these growing causes of concern that after 15 years of working with the National Health Service (NHS) in the UK and with a lucrative career charted, award-winning psychiatrist (Fellowship of the Royal College of Psychiatrists, 2016, and recipient of the R C Psych Volunteer Psychiatrist of the Year award in 2014), Dr Manoj Kumar decided to return to his home state of Kerala.

Dr Manoj recalls his father as being the biggest influence in his life growing up, with his occupation as a judge having an influence on the values he developed.

“From a young age itself, I realised that justice is not invariable but in fact it is what people wanted it to be. These early experiences led me to become a naturally inquisitive student and observer, where I would always question the status quo and try to understand why things were the way they are,” says Dr Manoj.

This growth continued with his journey through medical college (MD, Central Institute of Psychiatry, Ranchi) where he started questioning the corrupt, broken systems in which commercial considerations were often given precedence over ethics – especially in psychiatry. His concerns strengthened his resolve to engage with psychiatry, with a deep belief that the traditional ways of treating the mentally ill by locking them up in hospitals and overmedicating them needed to be changed.

While doing his Diploma in Psychological Medicine (DPM) at CMC Vellore, Dr Manoj started to get a broader understanding of psychology through his experiences in working with palliative and cancer patients and their mental health. Within the established institutions that were caring for these patients, Dr Manoj started seeing an uncomfortable pattern when it came to mental healthcare – it was inaccessible, inefficient, inhumane in practice, and costly.

These barriers were especially apparent when it came to the treatment of the lowest strata of society, where the severely mentally ill from the poorest of families in India have little to no access to care at all.

Meet 18-year-old Garvita Gulhati, the only Indian nominated to be a 'Global Changemaker'

A turning point in Dr Manoj’s life came when his mother passed away from cancer, bringing the realisation that even though she had received the best possible medical care, her psychological state of being had not been taken care of.

These experiences and an uncompromising belief in social justice led Dr Manoj to the start of a lifelong commitment. His goal was to find a solution to help those who are completely forgotten in an already inefficient system get access to quality and comprehensive mental healthcare whenever they needed.

“Governments were not doing enough to support people with severe mental illnesses. I knew that communities had to be at the forefront and a powerful solution to this growing problem was possible. I then left my job in the UK to head back home and get started on working towards this,” says Dr Manoj.

Through his organisation Mental Health Action Trust (MHAT), which was set up in 2008 and headquartered at Kozhikode, Kerala, Dr Manoj has built a community-owned-and-led model of care. At the core of Dr Manoj’s model is the use of ‘task shifting’ to break down the role that a traditional psychiatrist plays and identify parts that a trained and well-supported volunteer can take over.

Outside of medication and initial diagnosis, rehabilitation, home care, and recovery measures were the elements of healthcare that Dr Manoj identified as being attainable by committed members of a community.

MHAT looks at existing resources in communities such as palliative care or primary healthcare centres, where there are existing cadres of non-professional workers, such as ASHA (Accredited Social Health Activists) nurses who are trained to work as an interface between the community and the public health system by the government of India as part of the as a part of the National Rural Health Mission (NRHM).

The independence of these centres across Kerala are vital considerations for the trust for two reasons: firstly, the care they provide is localised and accessible to patients, and secondly, because of the de-professionalised nature of care, the stigma associated with seeking support for a mental illness is often overcome.

Members of the community who take up ownership for providing care across the 54 community centres of MHAT in Kerala hail from different walks of life and include small businesspersons, teachers, and autorickshaw drivers. These individuals come together, organise rosters, raise funds, and support the running of the centres with a common purpose – to bring normalcy to the lives of people with diagnosed mental illnesses.

The community centres and their volunteers carry out the initial task of identifying people in their community who may need support and then reach out to them. Once volunteers are assigned to patients, an outpatient camp is organised to carry out initial diagnoses, now increasingly done through tele psychiatry, wherein medical professionals who legally are allowed to prescribe medication can conduct their initial assessments of patients through video conferencing or telephone.

This fundamentally shifts the dynamics of care, creating an efficient process by which patients from most rural areas can receive the required support. The local volunteer then becomes the point of contact and lead owner of the case, ensuring that treatment plans are moved ahead appropriately and the needs of the patient are met.

With strong protocols and practices in place, the volunteers have the constant support of MHAT staff and access to other non-medical professionals through the local community centres.

Grounded by the belief of holistic care, these community centres also run day-care centres that provide safe spaces for patients to develop the skills and behaviors that they have lost to years of silent suffering. The care also extends to family group therapy and the formation of self-empowerment groups among the patients’ families. Moderated by community volunteers, these spaces are becoming vital to strengthening the support systems across local communities. Some of the centres are now being taken care of by previous patients and their family members.

With a footfall of over 4,500 patients so far across eight districts in Kerala, MHAT is now looking to expand its model outside of the country to migrant workers in Oman, Muscat, and the larger Gulf region. To enable this, Dr Manoj is quickly digitalising the certification and training process of volunteers to be able to quickly and efficiently decentralise his model.

For Dr Manoj, seeing tribal communities from the remotest corners of his home state get access to care gives him the hope and motivation that a community-based mental healthcare system can support countless numbers of patients.