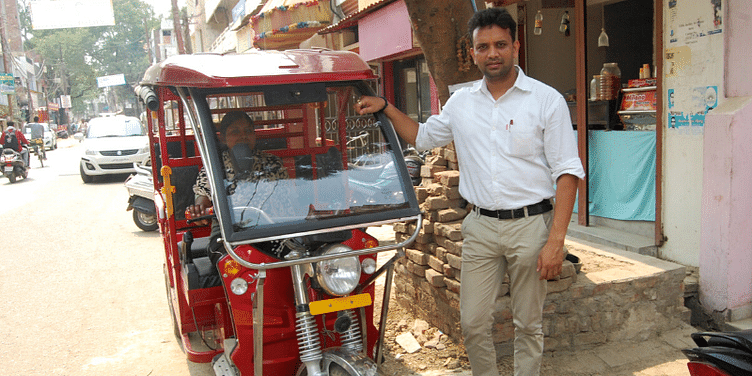 At a time when India, among other countries, is constantly struggling to breathe clean air due to rising pollution levels, electric vehicles (EVs) hold out some hope. Not only do EVs help cut down carbon emissions, but they also reduce the consumption of fuels and facilitate the growth of employment in alternate sectors.

According to a study by the Electric Power Research Institute (EPRI) and the National Research Development Corporation (NRDC), transportation powered by electricity significantly decreases the release of greenhouse gases (GHG) and other air pollutants, compared to petroleum.

Though there is an increasing shift towards eco-friendly transportation with the introduction of EVs in recent years, marginalised communities in transport such as rickshaw-pullers find it difficult to obtain funds and service support to access this sustainable option.

To address this gap, SMV Green Solutions, a Varanasi-based social enterprise, is looking to promote sustainable transport among rickshaw-pullers by enabling them to transition from hand-pulled vehicles (tricycles) to electric rickshaws.

Founded by Naveen Krishna (37) in 2015, the startup helps rickshaw-pullers change over to EVs through a spectrum of support strategies – from mobilising the community and assisting them to access micro finance, to handling the purchase and delivery of the three-wheeler, fulfilling the registration process, obtaining insurance, and training them in steering the vehicle.

“India has over 10 million manual rickshaw and trolley-pullers who work under treacherous conditions on a daily basis. Whenever I used to come across manual pullers on the street, I was gripped with sadness. I knew the benefits of using EVs for mobility quite well – reduction in emission levels, improvement in public health, and dilution of ecological damage. Hence, I established SMV Green Solutions to aid manual pullers move to EVs.”

So far, the venture has lent a hand to more than 1,200 rickshaw-pullers across Uttar Pradesh and Bihar in transitioning to e-rickshaws.

This IIT-Bombay alumnus is pedalling his way through the Golden Quadrilateral on his solar-powe...

Naveen, born and brought up in Varanasi, completed his master’s in social work from Banaras Hindu University and went on to work with non-governmental organisations in the due diligence and appraisal space.

Just when Naveen was at the helm of his career, he encountered an incident that put him at a crossroads and led him to take up the environmental cause.

The entrepreneur recalls his experience from a few years ago while travelling in a prime locality of Varanasi. Coming across a man handling a manual rickshaw, Naveen witnessed him being exploited by a street vendor.  He recollects,

“I could see the vulnerability in his eyes. That is not all; despite bearing the load of one or, sometimes, two passengers and cycling his way through the city all day, he hardly earns enough money to feed his family. The incident stayed with me for a long time, and I was thinking about how I could make their lives better. Later, the idea of enabling rickshaw-pullers to buy EVs struck me and I decided to quit my job to pursue it.”

Improving the livelihood of rickshaw-pullers

SMV Green Solutions offers a one-window solution that improves the livelihood of rickshaw-pullers and also introduces them to the green mobility segment.

In order to mobilise rickshaw-pullers and create awareness of e-rickshaws among them, the startup conducts campaigns and events. As soon as a certain amount of interest is generated, Naveen’s team approaches them with their services.

“We provide all the services through our collaboration with banks, manufacturers, and insurance companies. In short, SMV Green Solutions creates asset ownership using forward and backward linkages. For instance, we have partnered with banks like Avanti Finance, SVCL, and IndusInd Bank to provide loans to the rickshaw-pullers. Similarly, through our tie-ups with Mahindra, YC Electric, and Saarthi, the e-rickshaws are ordered and procured from them.”

One of the main challenges that the Varanasi-based enterprise initially faced was the hesitation of banks to provide loans to rickshaw-pullers due to a fear of non-repayment. SMV Green Solutions undertook a pilot project in the city of Munger for six months with the hope to resolve this issue.

As part of the project, banks agreed to provide 23 rickshaw-pullers with a loan of up to 90 percent of the cost of the vehicle (Rs 1.5 lakh). SMV Green Solutions later extracted the data on repayment, which showed that all of them had repaid the money in instalments on the set dates.

This infused a certain amount of confidence in the banks, which led them to provide loans to a larger number of rickshaw-pullers.

“We also offer a pay-per-use battery-swap service, ‘SMART Charge’, aimed at giving the e-rickshaw drivers access to high-performance lithium-ion batteries with the objective of ensuring that they overcome issues like long charging time, battery maintenance, and less mileage,” adds Naveen.

SMV Green has also integrated an inclusive approach in its offerings by launching a programme,  ‘Vahini’, to enable more women to enter the mobility arena. With this programme, the enterprise extends its services to women looking to become rickshaw drivers.

As safety is a major concern deterring women from entering this space, the company has taken up the responsibility of installing their vehicles with a cloud-based camera and providing smartphones.

“We earn our revenue from certain purchase margins on the e-rickshaws, the charges levied on vehicle servicing, and the insurance commission. Most of the funds for the company’s establishment and operations flowed in from the SAR group, Yunus Social Business Fund and Shell Foundation,” says Naveen.

A positive impact on the people and environment

Among those who have benefitted from SMV Green’s solutions is 32-year-old Priyanka Vishwakarma, a resident of Allahabad. A few years ago, she was hardly able to make ends meets. However, once she signed up to be an e-rickshaw driver under the Vahini programme, her livelihood has improved significantly.

"SMV Green Solutions has brought about a huge difference to my day-to-day living. It has empowered me by providing a means of livelihood. And, now, my income has increased three-fold. I am using my earnings to support the education of my children,” she says.

Naveen’s enterprise has already set itself targets for the next five years and is looking to intensify its promotion of clean transport and provide better livelihood to around two lakh people across 40 Indian cities.