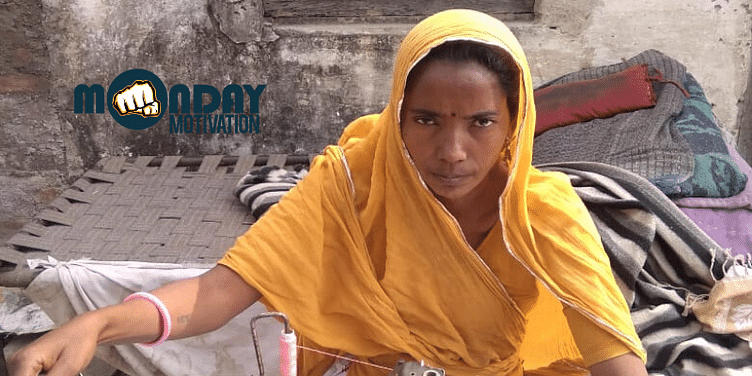 Thirty-three-year-old Laad Lohar, who has been spreading awareness about menstrual health among women, also teaches them how to make reusable sanitary pads.

With stretches of barren sandstone on one side and pleasantly variegated cacti standing tall on the other, Rajasthan used to house the Gaduliya Lohars, a nomadic community of ironsmiths, way back in the 15th century.

Thirty-three-year-old Laad Lohar who now resides in the village of Ramnagar, Udaipur, is a descendant of the clan. Though Laad was always keen on learning and wanted to go to a school, her family was not supportive of the idea, mainly owing to the onset of her menstrual cycle. As time went by, she realised that she had missed the bus. That’s when Laad decided to prevent such incidents from recurring within her community.

According to a report published in 2019 by Dasra, a Mumbai-based non-governmental organisation, 23 million girls in India drop out of school every year due to lack of proper menstrual hygiene facilities, which include the availability and affordability of sanitary napkins, as well as the know-how about their usage.

To improve this situation, not only did Laad start spreading awareness about menstrual hygiene among girls in her village, but she also, figured out a cost-effective way to make reusable sanitary pads using cotton and banana fibre. That is not all. The 33-year-old kicked off her initiative under the name ‘Kamakhya’ to ensure the self-sufficiency of women during their periods. In the last nine years, she has trained more than 500 women to produce their own sanitary napkins.

SocialStory met Laad Lohar on a train as part of the Jagriti Yatra, during which she said,

“A lot of young girls in my locality did not know about the existence of sanitary pads in the market, and those who were aware of its availability could not afford it. Hence, they landed up using dirty clothes, sand, rags, leaves, and so on. Besides having to face the consequences of ill health, this practice was harming the education of girls. My only motto in the last few years has been to stop such scenarios from happening.”

These social entrepreneurs are making menstrual health affordable and sustainable

Laad Lohar did not attend school. But her inquiring mind and yearning to learn led her to the path of self-education. She borrowed textbooks from her neighbours, friends, and studied them on her own within the four walls of her house. Due to certain stringent norms within Laad’s community, she had to get married when she was as young as 18.

“After a few years of the wedding, my husband and I got separated. That was when I got to know the importance of getting educated, having a career, and being independent, both financially and otherwise. I did not want any other girl in my neighbourhood to miss out on going to school and college like me. When it came to my notice that menstrual hygiene and accessibility to sanitary pads were causing girls to drop out of school, I wanted to do something to stop it,” Laad recollects.

Talking about menstruation is still a taboo in several parts of India. Even mothers keep it very hush-hush and do not open up about the natural process of bleeding with their daughters. This, in turn, acts as a barrier in young girls attaining good menstrual health, and attending school regularly. To fix this, Laad Lohar began discussing periods with girls in and around Ramnagar.

“I literally went door-to-door to converse about menstrual health, but was shooed away by people. After persisting for days, I was able to gain their trust and they started opening up with me. I got to know that many young girls entered puberty with no support mechanism. They were oblivious to the availability of sanitary napkins. The few who did have some knowledge about it were not able to pay for it,” Laad notes.

After talking to hundreds of girls and women, Laad figured that affordability and accessibility were the issues that needed attention. She came up with the idea of making sanitary pads on her own based on the feedback she received. The 33-year-old decided to use cotton, banana fibre, and parachute fabric after considering factors like safety, reusability, and absorbency. Laad also put in an initial investment of Rs 10,000 from her earnings as an ironsmith to buy basic machinery and other materials.

Once she was successful at making them, she put in an all-out effort to teach as many as 500 women. Today, all of them are self-sufficient, and can maintain good menstrual hygiene. And, Laad herself, makes 10 sanitary napkins a day. However, since most of her customers belong to a humble background, she still does not have a choice but to sell it at the price of Rs 35 per piece.  She is presently looking to collaborate with NGOs and social enterprises in order to expand the reach of her product.

Enabling girls to continue their education

Despite social and economic constraints, Laad Lohar’s compassion and determination led her to empower young girls in her village.

“All the indifference and mistreatment I faced during my initial journey seems worth it now. Many of the girls in my village have been going to school regularly, and some have even completed Class X after my intervention and training. Even the Sarpanch is supporting me in my mission today. I am glad that the silence surrounding menstruation is broken, and most of them are talking about it freely now. It is truly heartwarming to see my efforts bear fruit,” Laad says.

Over the last few years, Laad has been participating in seminars, and training women across cities like Jaipur, Jodhpur, and Bikaner, and has earned herself the sobriquet of ‘Pad-Woman’.

How Sukhibhava is helping women in urban slums move beyond sand, ash, and leaves to improve menstrual hygiene