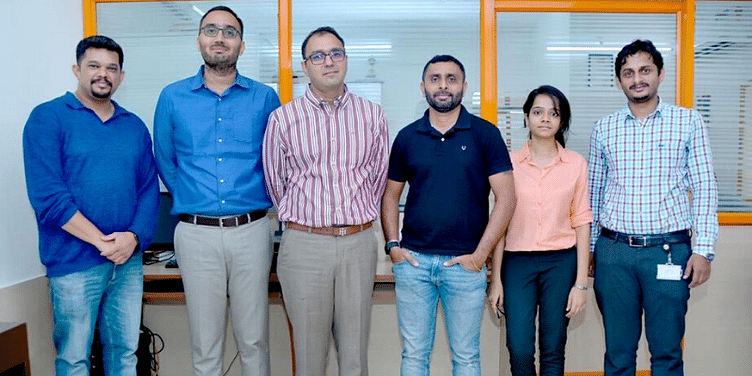 Founded in 2017 by Dr Vishal Rao and Shashank Mahesh, Innaumation has developed a cost-effective prosthetic device that gives people affected with throat cancer their voice back.

In 2018, Ramakrishna, a security guard working in Bengaluru, was diagnosed with throat cancer. His world came crumbling down when he was told that his larynx (commonly known as the voice box) had to be removed.

“When I figured that they were going to do away with the organ that was holding my vocal cords, I was extremely saddened. Even the thought of not being able to talk post-surgery was frightening. Besides, buying prosthetic devices available in the market was something I couldn’t consider due to the high prices,” Ramakrishna says.

According to a report published in the Journal of Pharmaceutical Sciences and Research, 20 out of every 1,00,000 people suffer from oral cancer in India every year. This is estimated to account for 30 percent of all types of cancers. Most cases involve a surgical procedure as part of the treatment wherein the voice box is extracted (laryngectomy), hindering the ability to speak.

After treating many people affected with throat cancer, Dr Vishal Rao, a renowned surgical oncologist, decided to find a solution. He was joined by his longtime industrialist friend Shashank Mahesh in the pursuit. In 2017, the duo co-founded ﻿Innaumation﻿ – a startup focused on giving a voice to those suffering from throat cancer through a cost-effective prosthetic device.

“People who undergo laryngectomy lose their speech due to removal of the voice box. I have witnessed this during the course of my career as an oncologist. Communication is an essential aspect of life and I believe that speech is not a privilege, but a right,” Vishal tells SocialStory.

While Vishal has worked with prestigious hospitals like HealthCareGlobal Enterprises Ltd, Shashank runs a rubber factory in the industrial area of Peenya, Bengaluru. In 2016, a casual chat between the duo sparked off the idea to design and develop a device that could work as a voice box and enable people to speak after undergoing laryngectomy.

“Almost 80 percent of those diagnosed with throat cancer need to go through a surgical procedure to get their voice box removed. There are a few prosthetic devices that can be imported from Europe or the US, but they cost anywhere between Rs 20,000 to Rs 35,000, making them unaffordable for patients belonging to low economic backgrounds. Not being able to pay for a product should not be a reason for anybody to not talk,” Shashank says.

Vishal and Shashank spent two years investigating various possibilities, doing research, and even talked to several engineers. Since Shashank was working in the rubber industry, he also had a fair idea about the kind of materials that could be used for the prosthesis. After some trial and error, he finalised on silicon.

“The first prototype was ready in 2018 and after a series of clinical tests, the device was launched in the market. We named it ‘Aum’, since the sound is believed to be the origin of all vibrations,” Shashank recalls.

Innaumation was bootstrapped with Rs 10 lakh. As of today, the startup has sold more than 300 Aum prosthetic devices with the help of its 12-member team. The company was also recently granted a patent of the seven they applied for, along with clearance from Central Drugs Standard Control Organisation (CDSCO).

How the device works

Speech in humans is produced by the interaction of the vocal cords present in the voice box with the wind. So when the voice box of throat cancer patients is removed surgically, the wind pipe and the food pipe get separated. This, in turn, leaves a hole in the throat, hampering speech.

“The Aum prosthetic device bridges the gap between the food pipe and the wind pipe. It connects them through a thin membranous one-way valve made of silicon and allows air to pass from the wind pipe to the food pipe. At the same time, the device ensures that no food particles enter the respiratory system. The air that seeps through creates a vibration, signalling the brain to produce the voice whenever a finger is placed on the throat,” explains Prasanna Hegde, Innaumation’s CTO.

The insertion of the device requires a small surgical procedure. The lifespan of the device is between six to 12 months, making it imperative for the patient to get it checked periodically. From the second insertion onwards, the procedure can be performed at the OPD itself.

Aum is available in the market at a price of Rs 3,000 along with all the required supporting items like guide wires, a secondary inserter, brush, inserter hard gel, and a patient laryngeal bib. These are manufactured at Shashank’s rubber factory.

“If any cancer-affected individuals are not able to pay for the device, we raise money from donors. We were able to meet the operating and capital costs of the startup post the bootstrapping with the help of grants from entities and incubators like DBS-NUS, C-CAMP, BIRAC and Social Alpha,” says Vishwas Uchila Shishir, the COO at Innaumation, and Vishal’s brother.

The Aum device gives people having undergone laryngectomy their voice back at a cost that is 85 percent lower than devices available in the market. Presently, the startup is reaching out to as many throat cancer patients as possible by approaching a slew of cancer centres all over India.

“We are also planning to launch a hands-free version of the device, which will enable the individual to use the product without having to use his or her finger to create pressure on the throat,” Vishwas adds.

According to a study published in The Lancet, India ranks 145th among 195 countries in terms of the quality of healthcare and its accessibility. Innaumation, by making prosthetic devices available to people affected with throat cancer, is attempting to change that.

“Just when I was about to lose all the hope, I came across Aum. A simple 15-minute procedure restored my voice,” says Ramakrishna, the security guard working in Bengaluru.

Meet the world's first blind trader; a man with no sight, but a lot of vision