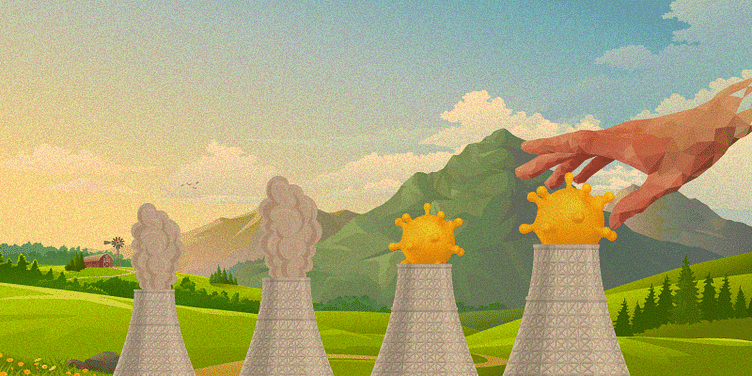 With the COVID-19 lockdown in place, smog has given way to blue skies, waterways are seeing more marine life, and pollution levels have dropped to a large extent.

Ever since the coronavirus pandemic struck across the globe, several reports have emerged highlighting the return of many species to their natural habitats.

The drastic measures taken by governments because of the spreading of the novel coronavirus, and the shutdown of factories, commercial establishments, and vehicular movement, has resulted in a drop in the pollution levels across the world.

As the pandemic continues to halt industrial activities, it has given people some time to breathe. But, is all of this only a temporary mirage?

As coronavirus is rapidly spreading around the world, most people are still confined to their homes. Schools, and offices have remained shut for weeks now. While some have lost their jobs, others are struggling to earn their daily bread amidst the lockdown.

Most of the major events and conferences such as the Indian Premier League (IPL), Facebook’s annual conference, and the World Athletics Indoor Championships stand cancelled. Several countries have tightened their borders and restricted the issuance of visas. ‘Work from home’ and ‘social distancing’ have become the new norm in everyone’s lives.

According to latest reports by the World Health Organisation, there has been over 8.5 lakh COVID-19 cases reported across the world so far, with a little over 42,000 deaths. In short, the virus has affected people irrespective of their social and economic status.

In the thick of all the gloom and doom, there is a silver lining. Mother earth seems to have rejuvenated itself – smog has given way to blue skies, marine life is seeing increased activity, pollution levels have dropped, and animals as well as birds are moving about on their own accord.

Senior citizens face a high coronavirus risk. Here’s what you can do

A considerable improvement in air quality

Satellite imagery shows signs of nature scoring a victory. Both environmental researchers and scientists have evaluated the air quality, one of the most prominent parameters.

With unnecessary travel being discouraged and manufacturing units facing a closure, the data gathered shows the emergence of cleaner air. According to a research by Columbia University, both carbon monoxide and carbon-dioxide emissions were observed to have fallen by around 50 percent and 10 percent, respectively, in the bustling city of New York.

An analysis carried out by Carbon Brief noted a 25 percent decrease in emissions across China during February 2020 due to the reduced use of coal and crude oil, as compared to the same time in 2019. Furthermore, the amount of nitrogen dioxide also dropped by 36 percent right after the Chinese New Year holiday, compared to last year. This can be verified with the measurements made by the NASA OMI instrument.

Some of the most-stark differences were recorded in Italy, Spain, and France – the three countries which imposed lockdowns much earlier than other European nations. The nitrogen dioxide levels across all of them saw a slump. Particulate matter (PM2.5) was sharply down in London, Cardiff, and Bristol since the closure.

India too has been breathing easy in the last few days. The Air Quality Index (AQI) sank to as low as 93 last month in New Delhi as compared to 161 in March 2019, as per IQAir reports.

“All the hustle and bustle in my neighbourhood has disappeared. It feels like everything around is ushering a beautiful spring. This sure is a consequence of the drastic reduction in carbon emissions from vehicular movements. The goal should be to take this trend ahead in the days to come,” says Suresh Heblikar, a filmmaker and environmental activist based in Bengaluru.

The World Health Organisation (WHO) shows that 9 out of 10 people breathe air containing high levels of pollutants. It also estimates the death toll due to air pollution to be around 7 million every year across the globe. In fact, the Collective of Doctors for Clean Air have stated that individuals residing in highly polluted areas can be more vulnerable to coronavirus due to the already caused damage to their respiratory systems.

Nevertheless, the improvement in the air quality owing to the outbreak of the pandemic looks like a ray of hope in the times to come.

While the COVID-19 lockdown has made it imperative for people to stay indoors, animals seem to have been undeterred by it. The quiet street corners, empty parking lots, and deserted parks have given more space for nature to take control. The subdued humdrum surrounding tourism and the reduced number of motorboats in Venice has led to cleaner waterways.

The nationwide lockdown is also providing perfect condition for olive ridley turtles to lay eggs in Odisha’s Gahirmatha beach and Rushikulya’s rookery. Usually, this event is known to attract huge crowds and officials from the Forest Department generally deploy a considerable amount of efforts and resources to patrol gatherings, protect the eggs, and later release the hatchlings into the sea. However, this time around, there were no such interruptions.

All of this shows that the pandemic is resulting in more room for animals to thrive even amidst the margins of urbanised existence.

Is this a long-term trend?

It is said that times of disruptions tend to lead to big transitions. The COVID-19 shutdown has given people a glimpse into what the world might look like if we live sustainably and conserve the resources of the planet. But, can people expect a transformation in the future?

SocialStory got in touch with a few environmentalists to understand their take on this.

Sunita Narain, a renowned environmental activist and the Director General of the Centre for Science and Environment (CSE), is of the view that the environmental restoration amid coronavirus outbreak is just a phase that might not have a long term impact.

“Right after this health crisis subsides, it is imperative to get the economy back in shape. People need to get back to work and continue leading their lives. This is just a phase. People can learn from it. However, we require long-term solutions like that of the utilisation of clean energy, conservation of forests, and efficient waste management systems in order to see real impact,” she explains.

While decreasing carbon footprints due to a standstill in industrial operations and vehicular movements is a sign of optimism, looking at the enormous scale at which global warming and environmental degradation is taking place, there is little joy in the air. A combination of policy and structural changes, conscious efforts to reduce greenhouse gas emissions at the individual level, and better awareness levels is expected to bring out tangible results.

R Rammurthy, an environmental activist who has been at the forefront of cleaning several water bodies across India resonated with this.

“COVID-19 has been an eye-opener. It has shown people as to how mother earth can bounce back to life if humans allow for it. But, unless the society cares for the environment and changes its attitude, all of it is bound to get back to square one,” he notes.