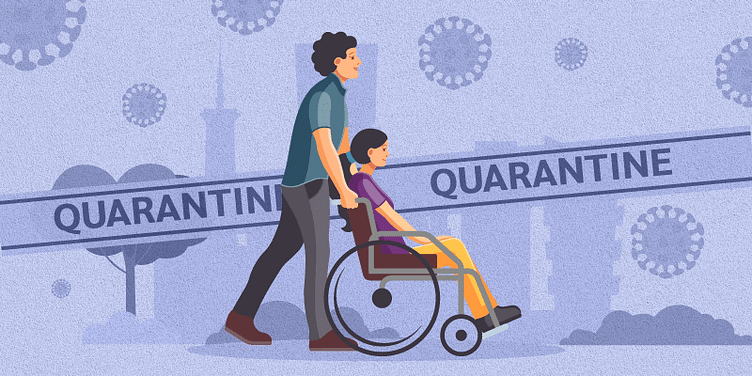 Right from buying groceries to doing daily household chores and practising social distancing, people with disabilities are faced with multiple challenges during the coronavirus-led lockdown.

The nationwide COVID-19 lockdown has left a lot of people agitated and unnerved. As the number of cases touched the 10,000 mark, the government has been stringent in implementing measures to curb all unnecessary outdoor activities, commercial pursuits, and travel.

While the lockdown is considered an effective move to contain the deadly coronavirus, it has left thousands of migrant labourers, daily wage earners, and other vulnerable sections of the community, especially people with disabilities, in the lurch.

Thirty-three-year-old Abhishek Anicca is a Delhi-based writer and poet who lives all by himself. He suffers from scoliosis, a sideways curvature of the spine, causing the lower part of his body to become immobile and numb. Ever since the lockdown was announced on March 24, he has been struggling to perform even the daily chores.

“I have somehow been managing to cook meals and clean the house myself. It sure is a taxing process. It drains me physically and mentally. Some of my friends are helping me with the purchase of groceries and vegetables. Though I do not prefer seeking anybody’s assistance and it bothers me at times, in the present situation, I am left with no choice,” Abhishek Anicca tells SocialStory.

According to the 2011 Census, out of the 121 crore population in India, a whopping 2.68 crore people are disabled. However, the extent of support at their disposal is very limited.

Even the norms of social distancing are cumbersome for these individuals, owing to their dependence on others to perform daily tasks. Cleaning homes and washing hands frequently are a few other exercises that make it imperative for the differently-abled to traverse the extra mile. Another big challenge that is evident during this phase is mobility. At a time when public transport is off the streets, buying essentials and medicines is nothing but a bumpy ride for them.

“Persons with disabilities are among the most marginalised in society. More often than not, their economic status is poor, and so are their chances of finding well-paying jobs. Hence, the present situation poses way too many risks for them. The coronavirus outbreak is not only threatening their health but also disrupting their access to various facilities. Now is the time PwDs need a helping hand and some relief,” says Arman Ali, Executive Director, National Centre for Promotion of Employment for Disabled People (NCPEDP).

Assistance from the government

The central, as well as state governments, have announced quite a few measures to assist persons with disabilities in the last few days. But, not all the benefits are reaching them.

On March 27, the Indian government released an advance pension of three months' to the differently-abled amid the 21-day lockdown. The initiative, which was launched under the National Social Assistance Program (NSAP), included a fixed amount of Rs 300 per month for PwDs up to 79 years of age, and Rs 500 for those whose age goes beyond 80 years and more. Besides this, Union Finance Minister Nirmala Sitharaman declared an ex-gratia of Rs 1,000 for the disabled over the next three months, due to be allotted in two instalments.

Though these relief measures are a silver lining, there is a lack of clarity on the process of applying and obtaining the benefits, according to many.

“There is quite a lot of ambiguity in the air when it comes to claiming all the benefits announced by the government. Besides, there is no alternative provision for individuals who do not have a disability certificate. The advance pension and ex-gratia were promised to be delivered by the first week of April, but, probably due to the above reasons, it still has not reached the entire targeted group,” Arman says.

Ketan Kothari is a visually impaired resident of Mumbai who works with an international NGO called Sightsavers which helps treat and prevent avoidable blindness. And, he is of the view that a coordinated approach between the central and state governments is the need of the hour.

“The lockdown has taken a toll on people with disabilities, including me. My parents have been taking care of most household chores. If not for them, I would not have known where to go or whom to reach out to for help. Though the government has announced a few initiatives, there is a lack of coordination and a comprehensive system to assist the PwDs. Besides, not all of them are even aware of the kind of aid being offered. Communication channels such as radio have to be leveraged at this point to spread the message,” he says.

Recently, the Department of Empowerment of Persons with Disabilities (GOI) issued certain ‘disability-inclusive guidelines’ to secure the protection and safety of persons with disabilities during the outbreak. In order to provide additional support as part of this, a set of Disability Commissioners were designated as nodal officers. However, they were either not appointed, or simply turned out to be unresponsive on reaching out. We, at SocialStory, tried contacting the office of the State Commissioner for Persons with Disabilities in Karnataka, Andhra Pradesh, and Madhya Pradesh, however, no reply was received.

“Some of the initiatives that could have been enforced by the government for PwDs is door-to-door delivery of groceries, a larger relief package adjusted to the current rate of inflation, and extended assistance for individuals living alone,” says Abhishek.

However, it’s not all bad news. A few of the state governments are ramping up efforts to cater to the well-being of the differently-abled during the COVID-19 ordeal.

Karnataka has made a set of videos about hygiene and social distancing practices intending to spread awareness among people. It has also ensured the translation of the content in regional languages, as well as in sign language. Uttarakhand, on the other hand, has facilitated the easy movement of caretakers, and has also made transportation of food and medicines for persons with disabilities hurdle-free. Jharkhand and Delhi government have started issuing separate electronic passes for PwDs. For people with hearing impairments, states like Tamil Nadu and Punjab, have enacted video conferencing facilities with sign language interpreters.

Thanks to this girl, India’s first disabled-friendly railway station opens in Kerala

A helping hand from NCPEDP

Two weeks ago, the NCPEDP tweeted helpline numbers and an email ID that persons with disabilities could reach to for aid. The helpline has been abuzz since then.

“We have been receiving calls from PwDs across India seeking a helping hand. A person with a disability in Nagpur called up saying he was not able to take his pregnant wife to the hospital due to the lack of transportation services in the city. Many individuals with thalassemia reached out to seek help in finding donors for blood, owing to the limited supply in hospitals. A resident from Rajkot, Gujarat, suffering from orthopaedic disability asked us for support in collecting ration after the authorities refused to hand over the essentials to his sister,” Arman says.

Once the request is received from PwDs via the helpline, the NCPEDP team gets in touch with its network of partners, non-governmental organisations, and disability commissioners in the nearest location to offer assistance.

“Persons with disabilities are present in all the 28 states of the country. They are not a homogenous, distinct group, and they need to be enabled during this pandemic. We are doing our bit as part of the NCPEDP. But a collaborative effort is needed from various stakeholders such as the central and state government, civil servants, citizenry, as well as other social enterprises and organisations,” Arman concludes.

From a small village in Tamil Nadu to the US: how a pottery-making group of women became global sellers

Cyclone Fani: here’s how you can help rebuild Odisha