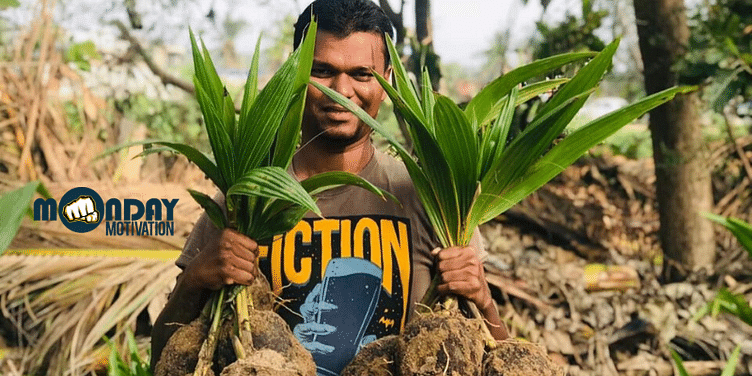 After Cyclone Gaja snatched the subsistence of hundreds of farmers in the Cauvery Delta of Tamil Nadu, 31-year-old Nimal Raghavan quit his well-paying job to help them.

November 16, 2018, was a fateful day – Cyclone Gaja had hit Tamil Nadu’s coastal regions, and left behind it a trail of destruction in the form of collapsed homes, uprooted trees, contaminated water sources, and ravaged infrastructure. Gaja began as a depression that originated near the Andaman Islands, and later snowballed into a cyclone, wreaking havoc everywhere it went.

Situated in the delta of River Cauvery, amid stretches of coconut trees on one side, and lush green vegetation on the other, Peravurani, a small town in the Thanjavur district of the state, also took a bad hit from the cyclone, which destroyed years of hard work put in by farmers in the area, and pushed the region’s economy to the brink of collapse.

Nimal Raghavan, 31, called this little home, even though he had traded it in for a job as a software engineer in Dubai.

Nimal happened to be visiting his hometown of Peravurani when the cyclone razed through the area, and seeing the devastation around him, he decided to do something about it.

“My father was a farmer, and it was the income that he earned from agriculture which supported me throughout – right from my daily needs, to my school fees. When I realised that more than 300 families, who were sustaining themselves through farming, were stripped of it due to the cyclone, I just could not let them be. I was determined to do my bit to lend a hand,” Nimal tells SocialStory.

Along with his senior from school, Naveen Anandan, he launched a disaster-relief campaign, not just in his town, but across 90 villages in and around it, and mobilised communities there to start clearing roads, fixing electric lines, and planting saplings.

That was not all; once more and more locals began to offer their support, he extended the scope of his endeavour to find sustainable farming practices, so that farmers in the area did not give up agriculture. He formed an organisation – the Kadaimadai Area Integrated Farmer's Association (KAIFA) – to look into sustainable measures that they could use to revamp agricultural lands and water resources in the affected regions.

After completing his schooling at Peravurani, Nimal had gone on to pursue his electronic and communication engineering from Anna University in Pudukottai. Immediately after, he began working at a call centre in Pune, following which, he moved to Dubai for work.

But witnessing the poor state of his home town made him realise that he wanted to dedicate his life to making it lush and flourishing again.

“I was really sad to see farmers in Peravurani abandoning their only source of livelihood⁠ and moving to cities in search of employment. Perturbed by these developments, I simply resigned from my job, and decided to stay back and dedicate all my energy to help things return to normal,” Nimal recalls.

He started with launching a social media campaign – called #BounceBackDelta – to gather and distribute relief materials such as clothes, groceries, toiletries, and tarpaulin sheets, for all the 90 villages affected by the cyclone. Along with friends, and other like-minded supporters, Nimal visited several villages, hoping to unite farmers and residents living there for the cause.

“It took a while for everyone to trust me and align themselves with my objective. But, once they did, all of them hit the ground running – fixing electric lines, clearing roads, and planting saplings – all by themselves. After witnessing this enthusiasm, I started another campaign - #DeltaSaplingChallenge. Over a period of time, we managed to raise a good amount of funds through it,” he says.

When things started to stabilise, he decided to rebuild farmlands in the area. Nimal, who had been on the lookout for solutions, realised that one of the main challenges farmers in the area were facing was that of water management.

The region had been getting 50 to 60 percent of its water from river Cauvery. However, nearly 150 TMC (thousand million cubic feet) out of that was lost every year due to the lack of proper means of storage and management. Nimal’s solution to the problem was KAIFA.

Its first project was desilting the Peravurani Lake, which occupied a massive 564 acres, and was known to be capable of irrigating more than 6,000 acres of land. More than 70 members volunteered to help Nimal with the task, and in less than three months, the team was able to increase the depth of the lake.

“We initially had a corpus of just Rs 21,000, but as work gathered pace, more contributions came in. In less than three months, we increased the depth of the lake, and raised the height of the bund by four to five metres. The district administration and the Public Works Department (PWD) were very supportive of our endeavour, and gave us necessary approvals without too many hassles,” notes Nimal.

Nimal did not stop there though – the team went on to restore 54 such lakes in the delta region, and also converted many defunct borewells into rainwater harvesting systems.

Farmers from this Telangana village make it rich with organic farming

When Nimal resigned from his well-paying job in Dubai to stay back, his relatives and acquaintances thought he was out of his mind. But, he powered through, determinedly.

“It was a very difficult decision for me. Since my father was battling a major health issue, he had stopped farming. My whole family was dependant solely on my income. Despite all this, I had a strong desire to help people in my hometown,” says Nimal.

Today, due to Nimal’s will and dedication, over 300 families have gone back to farming. Equipped with the know-how of sustainable farming, the village grows not just coconut trees, but also fast-yielding crops like rice, wheat, and vegetables.