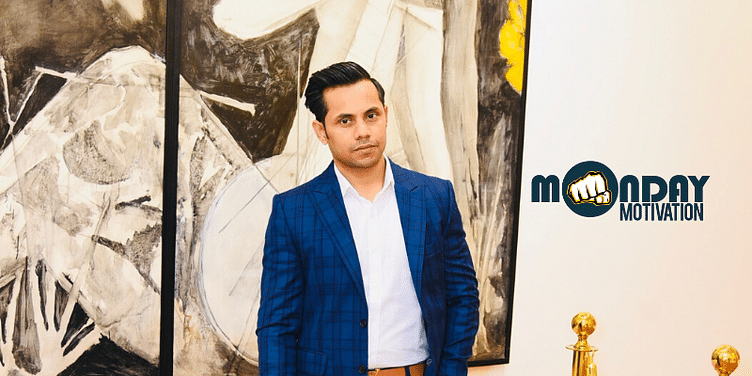 Asif Kamal, a renowned businessman and art connoisseur, has been bolstering India’s efforts in fighting the coronavirus pandemic by providing essentials to distressed people in rural areas, and arranging buses for migrants to travel back home easily.

Several organisations, foundations, and individuals have been stepping in to help the underprivileged survive the coronavirus pandemic by donating meals, essentials, medicines, and other items necessary for survival.

Asif Kamal is one such individual who, because of his rags to riches journey, has been able to empathise with the plight of daily wagers and migrant workers.

His enterprise – the Asif Kamal Foundation – has been helping supply essentials to the needy in rural areas, and arranging for buses to transport migrant workers back to their hometowns.

Chairman of Dubai-based Alturaash Group, Asif’s lifelong ambition has been to empower the underprivileged people of India. He runs an art house in Dubai and an art gallery in New Delhi’s DLF Mall.

In a conversation with Social Story, Asif Kamal talks further about the efforts of the foundation during the pandemic, and its ultimate goal of making healthcare and education accessible to everyone.

Asif lived his childhood in a village in Bihar, somewhere along the border of Nepal, approximately 10 kilometres away from Supaul. His father worked as a postmaster in the village, but due to financial struggles, moved to Dubai to get a better job. After five tough years, he landed a job at the Indian Embassy.

“My mother was a very strong woman, and was very firm on us receiving education,” says Asif. “She had to make do with the very little money we had.”

Asif’s first school conducted classes under a tree as there were no school buildings in the area. However, when a small academy was established in the village, his mother made sure to enroll him, making him the very first student. He studied there until the eighth grade, for which he even wrote a board exam.

Shortly after, the family moved to the Darbhanga district, where they stayed at Asif’s mother’s place. He was enrolled in a government school, where he wrote his 10th-grade board exams.

Having not pursued his higher education, Asif worked several jobs, including retail – as a salesman at Shoppers’ Stop, where he earned about Rs 4,000 every month. He even worked as a call centre executive at Hutch (now Vodafone India).

In 2009, Asif moved to Dubai to learn how to trade from his father, and initially set up his own stainless-steel business. Once his company met with some success, he entered the art business.

In 2019, he established the Asif Kamal Foundation, to do his bit for society.

“Being in a position to help the underprivileged, I knew I had to give back to the society after all the blessings I have received,” says Asif. “I know that despite the timeline we live in, the situation hasn’t changed for children, especially in Supaul district. I understand their pain.”

The reason he chose to focus on education was because the dropout rate in his village, post-grade eight, had been increasing exponentially every year. Asif decided to help make high-quality education available there, and in other villages of India.

The foundation, soon after, also started providing scholarships to aspirational students, based on their family’s income and their merit and interest in academics.

Healthcare was another thing the foundation wanted to focus on:

“In Bihar, the people who live near the city of Patna, travel more than 400 kilometres to reach the hospital,” says Asif. “So we wanted to ensure that our hospital was at a reasonable distance, making it accessible to these rural places.”

With the COVID-19 pandemic taking a toll on the lives of the daily wagers and migrant labourers, Asif’s foundation has been working diligently to provide essentials, as well as ration supplies.

The organisation has been most active in the states of Bihar, Delhi, Punjab, and Maharashtra.

“We are currently faced with novel disease and situation right now, and it is putting our most needy population at the biggest risk. So, my team is now working to help these people with basic requirements,” says Asif.

The team has set up a helpline number and circulated all contact information on WhatsApp groups. These groups – some of which include local civic body leaders – help the foundation’s team note the requirements of each village, and details of distressed families.

So far, the organisation has distributed ration kits, food supplies, and other essentials among people, helping over 12,000 families. They have also arranged buses for comfortable transportation of over 500 migrant workers.

“Based on their requirements, we are providing them with what exactly they need – if they are stranded in the city, we provide them travel passes. In times when are not in need of rations, we give them financial support,” says Asif.

The organisation says it wants to build a combined unit to house a school, a hospital and an orphanage, all in the same space.

The orphanage will be meant for children who don’t have a roof over their heads, or whose parents cannot afford to take care of their children.

The children will have access to quality education, and basic healthcare facilities, all provided by the foundation. The fee will be based on the family’s financial status, and they will either be provided free education, or at a very nominal fee if the parents can afford to pay.

How the coronavirus pandemic is re-shaping education

The hospital aims to provide facilities and services comparable to private centres, with costs as low as that of a government hospital.

To make sure the resources are going to those who need it the most, and not being misused by those who can afford to pay the full price Asif had laid out a plan:

“The BPL card will be the first line of filtration. We will also cross-check financial details with the district leaders’ records,” says Asif.

The organisation will also help those who cannot afford medicines and treatment to get free access to healthcare once they produce a letter stating they don’t have any source of income.

The project is currently self-funded, but the organisation said it will put out a call for funds in the coming weeks. Several investors have already expressed interest in helping Asif with his endeavour.