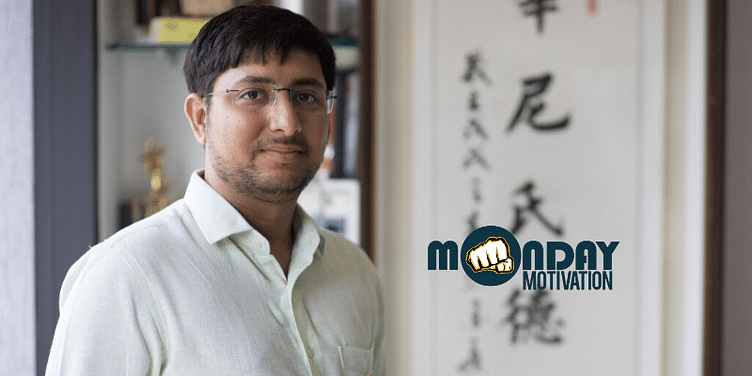 An old adage goes as: “You’re never too young to change the world”. Twenty-six-year-old Dr Binish Desai stands as an exemplar to this.

Born in Valsad, Gujarat, Binish was always very inquisitive and keen on learning new things. Just like any other child, he used to revel in outdoor games, cartoons, and comics. However, his favourite pass time among them was watching Dexter’s Laboratory – an act about a boy who ran a secret science lab at home. The show not only entertained Binish, but also inspired him to think innovatively.

In all likelihood, it served as a seed for the then 10-year-old to perform his own little experiments. From there on, there was no looking back for Binish. Right from inventing his first machine to convert vapour into water in his mother’s kitchen, building P-bricks from industrial paper waste to becoming the ‘Recycle Man’ of India, he did it all.

His insatiable curiosity, divergent thinking, and industrious nature helped him don multiple roles that he fulfills even today as an entrepreneur, environmentalist, and innovator.

“Since I was a kid, I always believed in doing what I love the most. And I landed up sticking to it even while growing up. I never wanted to be an engineer or a doctor, but had a deep desire to do something good for the community. It was that thought that drove me to be where I am today,” Binish Desai tells SocialStory.

The year 2004 was a turning point in Binish’s life. Binish was studying in grade six at St. Josephs ET High School when his friend stuck some chewing gum to his pants. So, he used some paper to pull it out and enclosed it in the same. Just when he was about to leave home, he observed that the sealed gum and paper had hardened into a chunky block.

“I still remember that day very vividly. I took that ingot home for further experimentation with the conviction that something useful would come out of it. Every other day, I would add some ingredients and binders to keep it steady. After a certain period, the idea of making a brick struck my mind. It also resonated with my dream of building the world’s cheapest house. Consequently, I continued my endeavours towards it,” recollects Binish.

It took Binish two long years of hard work to build a low-cost brick that could be used for infrastructural purposes. He was just 16 then. However, he was sure about taking the leap, traversing the entrepreneurial route, and establishing an enterprise of his own. Nonetheless, his journey was not easy.

“I faced a lot of flak from my relatives, family members, and friends. They thought I was crazy and that my career was being wasted. It did bother me a little at that time, but I simply decided to follow my heart. I started BDream Foundation with just Rs 1,600 in my pocket,” Binish quips.

Binish did not have sufficient funds nor resources like land and labour to run his company. But he had to make a start somewhere. The P-bricks that he had developed was mainly made from paper waste, leftovers of chewing gum, some organic binders, and plant extracts. Hence, he first approached a few paper mills to request for scrap as well as some space within their premises to build the bricks.

“Luckily, one of the mills offered me their parking space to work in. For almost 11 months, I spent my mornings going to college and my evenings creating the P-bricks. And, at the end of it, I had made 3,000 odd bricks with which I eventually put together the prototype of a house. After I presented it at one of the innovation melas, I began getting orders from individuals, corporates, and NGOs,” explains Binish.

Over a period of time, Binish’s firm BDream landed up constructing 11,000 toilets, houses, and buildings in rural Gujarat, Maharashtra, and Andhra Pradesh.

Despite these efforts, very soon, things went tumbling down. In 2016, a few of the investors started coercing Binish to give away the patent he had earned for the P-brick. So, he couldn’t help but step down from his own enterprise. It took a couple of months for Binish to bounce back to normal. He kept to himself, avoided social interactions, and even spent some sleepless nights.

Before long, he picked himself up and kicked off afresh with Eco Eclectic Technologies in the same year.

Binish forayed into waste management with his new firm. His work and research earned him a whole lot of appreciation as well as funds in the form of grants. The 26-year-old not only set up a manufacturing facility but also a dedicated research lab to experiment and innovate new methodologies to recycle industrial waste.

“I did not want to confine my efforts to recycling paper waste to make P-bricks. Hence, myself and my team began working with 50 other types of industrial waste including metal, wood, and textile trash. We broke it down, analysed it, and then managed to use them to make a range of products like artificial wood, fabric lint, precast roofs, soundproofing panels, acoustic panels, wall panels, absorbents like crude oil, etc,”

Another venture that Binish initiated was Eco Light Studio. The intention behind this was to empower widows and uneducated rural women by providing employment opportunities. He conducted training sessions for many of these underprivileged women in and around villages in Gujarat to make clocks, bags, and other accessories from waste.

In the last one year, Binish has been able to divert around 1996 metric tonnes of waste from entering the landfills by merely recycling trash into usable commodities. Consecutively, this also resulted in the reduction of 3,592 tonnes of carbon emissions.

Binish was also featured as part of the Forbes 30 Under 30 Asia list of successful Social Entrepreneurs in 2018 for this feat.  The entreprenuer and author, Nikhil Chandwania documented Binish's journey in the form of a book titled, 'The Recycle Man,' in the same year.

Binish says, he owes a large part of his success to Rotary International, a not-for-profit organisation that brings people together to provide humanitarian service.

“Rotary International played an integral role in shaping my personality and channelising my thought process towards contributing to the society at large. Since the number of COVID-19 cases in India is still on the rise, I have decided to build affordable, multi-purpose portable isolation facilities made of light weight panels with high insulation properties. I really hope they can help in areas where there is a lack of medical facilities,” says Binish.

From a madman to changemaker: how Swapnil Tewari beat the odds to bring hope to others