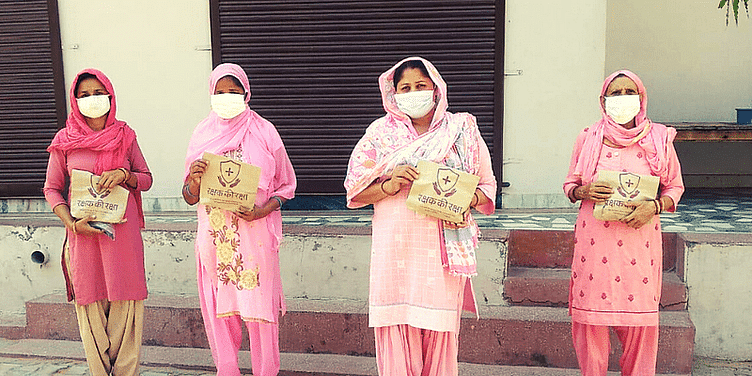 ‘Rakshak ki Raksha’ is an initiative to protect the country's most vulnerable healthcare warriors, such as ASHA and Anganwadi workers, who are at the forefront of the fight against the COVID-19 pandemic in rural India.

Recognising this need early on, Shivang Tayal and his family who run the Hisar, Haryana-based Tayal Foundation collaborated with the Hisar Chapters of Indian National Trust for Art and Cultural Heritage (INTACH) and Indian Medical Association to launch an initiative to serve this very purpose.

“We knew there was a need because there were a lot of stories about ASHA and Anganwadi workers who, on the one hand, run rural India’s childcare system and, on the other hand, were working in COVID-19 containment efforts and were catching the virus. And that becomes very dangerous because of the risk of these healthcare workers turning spreaders,” says Shivang, who founded the Rakshak ki Raksha campaign with his parents Mukul and Sumita Tayal and brother Eeshan.

The women in the frontlines

Indeed, India’s ASHA, ANM, and ANN workers — who are almost all women — have been quietly and tirelessly working in villages and towns across India to help the government in the war against the coronavirus pandemic.

These women — who run rural India’s childcare systems — have been going door-to-door to create awareness about the COVID-19 pandemic, dispel rumours, educate people on safety measures, and check for coronavirus symptoms.

At great risk to their own health, many of these women are also acting as the eyes and ears for the government on the ground by carrying out a variety of other initiatives such as collecting data and conducting tracing of migrants returning home from across the country.

“To help these frontline healthcare workers effectively, we had to understand the exact need at the ground level, for which we had to interact with the authorities at three different levels,” says Shivang.

“I was able to get synchronised with all three levels to identify the resource gaps in each district. The authorities at each level confirmed, which districts were under-served and which frontline healthcare workers were in need of resources and PPEs,” says the Cornell University graduate Shivang, who is due to pursue his MBA in Massachusetts Institute of Technology in September.

Each of the Raksha kits – which are assembled by employees of the Tayal Foundation in their facilities in Hisar – typically includes face shields, goggles, hand sanitisers, SS-96 and SITRA-certified triple layer cloth masks, soaps, and gloves.

To procure the masks, the Taval family, which runs a textile business in Hisar, took advantage of their connections in the textile industry to obtain masks from manufacturers at cost price or even for free.

But it wasn’t just about the cost. Quality was paramount.

To ensure this, the campaign organisers ensured manufacturers had the necessary certifications and coordinated with the Chief Medical Officer in each district to confirm if the products met quality standards and to get their go-ahead.

For sanitisers and soaps, the Rakshak ki Raksha campaign organisers reached out to consumer goods maker Hindustan Unilever, who donated all the sanitisers needed for each Raksha kit.

Since its launch in March, the Rakshak ki Raksha campaign has provided more than 10,000 such safety kits to healthcare workers in over 900 towns and villages in six different districts in Haryana and Delhi.

“To have the maximum impact, we decided to provide individual paper bag kits for each worker, rather than sending bulk boxes of each item. Because we assembled everything into these paper bag kits, we were able to track if each of the frontline healthcare workers were getting these field kits,” says Sumita Tayal, who also heads the Hisar Chapter of INTACH and is leading the efforts to raise funds for the donor-driven campaign.

Typically, the organisers send a batch of at least 1,000 safety kits at a time to the District Chief Medical Officer to cover over 100 towns and villages in that area.

To coordinate the distribution efforts, the organisers use WhatsApp to receive updates from ground workers to confirm if the kits have successfully reached the frontline workers.

Images of grateful ASHA and Anganwadi workers with their Raksha kits flood these WhatsApp groups, as do videos with personal messages of thanks from individuals or a group of workers.

“It’s so heartening to receive these messages. These healthcare workers are so sincere and patriotic, and many of them haven’t seen their families for the past two months,” says Sumita.

For Shivang, who was previously working in a consulting firm in the United States for the past three years, working on this campaign has been a life-changing experience.

“This work has been so fulfilling, especially because you can make an impact during such an important, turbulent time. It takes a lot more effort than your regular day-to-day job which you do for a salary but it’s more fulfilling,” Shivang adds enthusiastically.

“There’s so much of buzz about PPE for doctors and many initiatives are focussed on ensuring they are protected, but government hospital workers also need to be protected and people need to know the story about these field workers who work in containment efforts and who, often times, do get infected as they are clearly not well protected. So, we decided to focus on that,” Shivang says.

However, as news of their efforts spread, the organisers started to receive requests from other non-profit organisations to help them protect their volunteers who are executing relief measures on the ground.

Reacting quickly to these requests, the Rakshak ki Raksha organisers provided more than 1,000 Raksha kits to sanitary workers and volunteers distributing food to migrant workers in New Delhi, doing so in collaboration with MCKS Food for the Hungry and Yellow Street Foundation.

“I think future projects could also be providing protective equipment and hygiene kits to migrant workers but as of now, we’re seeing so much need in protecting these frontline healthcare workers and hence we’re focussing on that for now,” Shivang says.

The campaign, which is raising funds from people across the country via Milaap, has received support from corporates like Hindustan Lever, from urban citizens living in the metros, and also from people from the very villages and towns where the Raksha kits are being distributed.

But there's no stopping Shivang and team in their mission to protect frontline workers. He says,