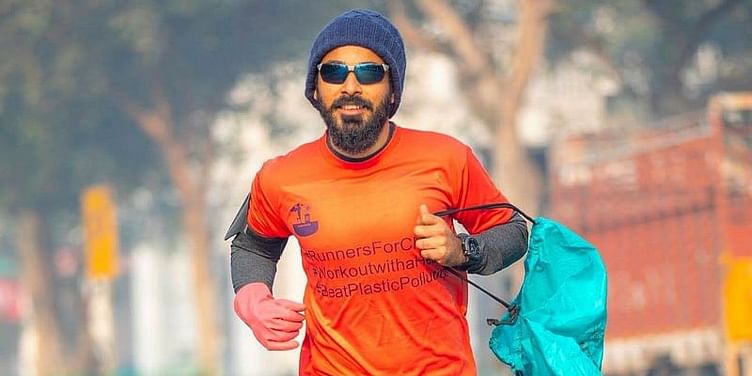 An ex-techie and a fitness enthusiast, Ripu Daman Bevli followed his heart in cleaning up the nation while inspiring others to join the cause.

In 2017, while enjoying his breakfast at Qahwa — a cafe in the SDA Market in New Delhi — Ripu Daman Bevli read a newspaper report, which said a particular stretch of road had been littered with plastic bottles and promotional material after a marathon had taken place.

A runner himself, Ripu and his friend decided to clean the place and cleared the four-kilometre stretch in about four hours. This turned into regular activity for Ripu, who also inspired others into doing this cooldown activity post their race.

Seeing the gradual positive impact of the practice, Ripu decided to quit his tech career to dedicate his life to the mission of making India ‘litter-free.’ And, in no time, he came to be known as the ‘Plogman of India.’

In a conversation with SocialStory, Ripu Daman Bevli talks about his journey, the eco-fitness trends in India, other social initiatives he is associated with, and more.

SocialStory [SS]: What is plogging, and how did you become the ‘Plogman of India?’

Ripu Daman Bevli [RDB]: When I restarted running, post a major hamstring injury, I used to train in the morning when there were few people and no traffic on the road, and I used to see litter, trash, and plastic thrown on the road. I wanted to do something about it, and that’s when I introduced this cleanup initiative to my running group.

After seeing its success in Delhi, I started talking to other Indian cities to implement it. We were initially called “My city, My Responsibility.” So, when we came across the term “plogging,” a Swedish term that combines picking up litter and jogging, we thought this is exactly what we do — we run and clean up the roads. Hence, we renamed ourselves to “The Ploggers of India” by the end of 2017.

SS: What are the different eco-trends that you have been implementing, apart from plogging?

RDB: We came up with a holistic fitness trend called #TrashWorkout, which improves not just your physical, mental, or emotional well-being but it also fights the societal misconception that litter on the road is not our responsibility. We do regular #TrashWorkout workshops with schools all over the country so the change starts at the ground level.

SS: Tell us a little more about your eco-fitness movement ‘Run to make India Litter Free’?

RDB: By 2019, we had done two years of work on the ground across multiple cities, working closely with schools, NGOs, colleges, and local communities. We wanted to take the movement truly national.

Thus came about ‘Run to make India Litter Free,’ where I ran and cleaned up across 50 cities in about as many days, making it the biggest such cleanup anywhere in the world. The idea was to get the local people to rally along in every city or place that I used to run and clean up.

I started solo from Kochi in September 2019, and by the time we finished the mission in Delhi, close to 50 lakh people had joined from across the country. In fact, the Indian government adopted our mission under the FIT India initiative.

SS: What was the impact of the pandemic on your initiatives?

RDB: On a personal level, I have been doing online workshops for kids and schools. We created the home version of ‘Trash Workout,’ which teaches kids to share responsibility with their parents and learn a new skill. We made it like a fitness activity for the kids, and they love it.

Secondly, I started a plantation drive from August 15, 2020, which will last till October 2, 2020, the 151st birth anniversary of Mahatma Gandhi. To mark the occasion, I am planting 151 trees and plogging 151 kilometres. Further, we will launch a nationwide plantation drive on October 2 to plant 15,100 trees across India. We would love to have corporates partner with us.

During the pandemic, I have been campaigning against the use of surgical masks and gloves by regular citizens. We should all switch to reusable masks and maintain hand hygiene for maximum protection against the virus. This way, the single-use masks don’t end up in the landfills or water bodies and create another crisis for humanity. I have also been writing a book about my missions, which should come out in 2021.

SS: What are some of your biggest achievements?

RDB: For me, the small achievements and victories that we achieve regularly are special. One of our first victories was when we started doing workshops with our first school.

The school had adopted the local mandi, so every couple of weeks, we used to go to that local mandi along with 50-100 kids and we would clean up. The kids would also speak to the shopkeepers and customers about the ill-effects of plastics. Within a couple of months, all shopkeepers in the mandi had big banners, saying they don’t have polythene bags, and encouraging customers to bring cloth bags.

In terms of major highlights, on October 2, 2019, I flagged off the first FIT India plogging run along with the Sports Minister Kiren Rijiju, where nearly 40 lakh people participated.

Another proud moment was when I received the certificate for the Plogging Ambassador of India from the sports minister, I could see the pride in my mother’s eyes. In fact, when my name was included in my niece’s school GK book, she came home beaming with joy after seeing my name.

Those moments are something that I really cherish.

SS: What were some of the biggest challenges you faced while plogging?

RDB: The initial challenge was always about getting people to join because we were trying to get them into an activity that was looked down upon. I mean picking up litter is supposedly not our responsibility; it’s a certain section of society who does this, and we generally call them garbage picker, or in Hindi, we say kachrewala.

Ever since I left my corporate career to make this my full-time commitment a few years ago, bootstrapping the mission has been hard. We are looking for sponsors to help us grow and achieve our goals.

SS: How have you envisioned the road ahead?

RDB: I am an optimistic person, and I believe we can make a real difference, that’s why I started the Litter Free India Movement to get 130 crore Indians to be a part of this change. Like the government banned spitting on the road after the pandemic, we don’t need another crisis to tell us that littering is harmful to humans, animals, and the environment.

Create a sustainable kitchen with these simple steps

Further, the pandemic has given us time to introspect our relationship with the environment, and I hope that we will come out wiser and live in more harmony with nature.

Let’s fight the climate change together by making sustainable choices daily by adopting some easy ways – by not littering, taking a bicycle wherever possible, switching to cleaner fuel, and segregating waste.