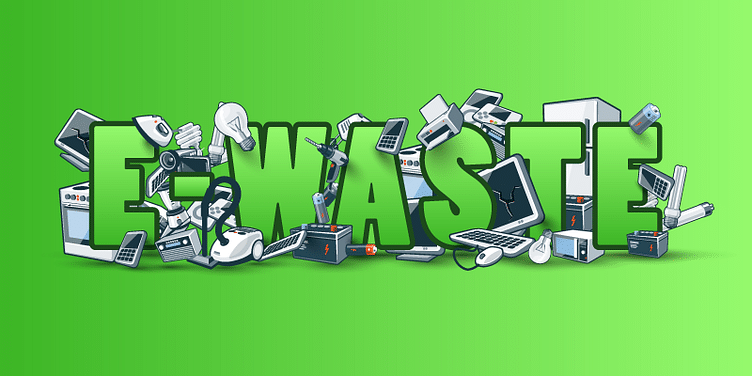 On the occasion of International E-waste Day, SocialStory brings you startups and companies that are helping India’s informal sector collect, process, and recycle electronic waste seamlessly.

Every year, electronic manufacturing companies flood the market with new gadgets. From computers, printers, refrigerators, televisions, to smartphones — a lot of electronic items are discarded and replaced when newer or enhanced models are launched in the market.

With the boom in technology and the mushrooming rate of consumption, the generation of e-waste too began increasing. But what happens to these items, which become unsuitable for their initially intended use, or have passed the expiry date?

According to The Energy and Resources Institute (TERI), India produces over two million tonnes of e-waste every year. In fact, it also imports large quantities of it from other geographies around the globe.

Not only does this result in a horde of challenges when it comes to handling and disposing of e-waste, but also jeopardises both environmental and human health.

Besides, e-waste generally comprises many toxic elements, including copper, liquid crystal, lithium, mercury, nickel, selenium, arsenic, and barium, among others. When this is dumped on landfills, the chances of e-waste polluting the surrounding air and water are significantly high. Hence, the scientific management of e-waste is imperative.

Despite the Ministry of Environment, Forest, and Climate Change (MoEFCC) releasing the E-waste (Management) Rules in 2016 and following it up with upgradations, lack of investment, infrastructure, and consumer awareness, there are still roadblocks to the effective handling of the waste.

Well, the good news is, several startups and companies have come forward to help India’s informal sector collect, process, and recycle electronic waste seamlessly. On the occasion of International E-waste Day — commemorated every year on October 14 — SocialStory brings you some of them.

Founded by Karan Thakkar in January 2011, EcoCentric is an e-asset management startup. With a strong belief in the three R’s of sustainability (Reduce, Reuse, Recycle), the startup undertakes a slew of activities — e-waste management, asset recovery, reverse logistics, data security and destruction, CSR initiatives (donations to NGOs), and refurbishment services.

The process followed at EcoCentric is quite simple. As the first step, it segregates the waste into glass, plastic, and metals. Right after that, it processes all the hazardous substances and sends the remnants for further extraction. The remaining plastic and metal pieces are given to the recyclers.

ENSYDE (Environmental Synergies in Development) was established as a consultancy in 2003 by Manvel Alur. Registered officially as a trust in 2006, the organisation enables Indian establishments and institutions to decrease their carbon footprint, and also assist them to manage their waste.

ENSYDE has also tied up with Rotary District 3190 and Rotary Bangalore Whitefield Central (RBWC), to organise a mega e-waste drive in the city. At the end of the month-long drive, it collected about 73 tonnes of e-waste by setting up 40 e-waste drop boxes in public places. All the waste collected was sent to the authorised recyclers under the Karnataka State Pollution Control Board.

Though initially founded as a firm catering to the hardware market, Cerebra IT Technologies eventually transformed to become an e-waste management startup. Cerebra assists corporates and other organisations decrease the production of waste at the source, as well as helps in reusing, and recycling them later.

By setting up a state-of-the-art facility, it has taken the responsibility to provide several e-waste management services. This ranges from segregating and salvaging electronic parts, to data destruction services, that prevent any kind of data theft even after the disposal.

The startup specialises in the socially-responsible and environmentally-safe disposal and dismantling of e-waste. All the waste sent to the company is 100 percent recycled into three main remnants — metals, glass, and plastic — without any further disposal in the landfills.

How this waste management startup pivoted to fight coronavirus

﻿Attero﻿ is a Bengaluru-based e-waste recycler and metal extraction startup founded by Nitin Gupta and Rohan Gupta in 2007. It is one of the first e-waste recyclers to be registered with the Central Pollution Control Board (CPCB), under the Ministry of Environment and Forests, Government of India.

The startup not only helps in treating e-waste but also collects the trash from various commercial entities.

Attero has an end-to-end e-waste recycling unit at Roorkee, where it processes end-of-life electronics in an environmentally responsible manner. Besides, the startup has built systems and technologies to extract and recover metals or reusable resources from the waste.

Through its wide range of services, including waste collection, electronic asset management and recovery, reverse logistics, refurbishment, and e-waste recycling, Attero is aiming to drive India towards scientific e-waste management.

BinBag was started in 2014 by Achitra Borgohain with the mission to ensure the faster adoption of a circular economy for end-of-life electrical and electronic equipment. The startup works with private organisations, healthcare units, NGOs, and government offices to recycle the e-waste generated from these places.

Additionally, it also offers services, including office liquidation (in case of location shift or shut down) and data destruction via wiping, physical carnage, or mechanical crushing. BinBag has set up two recycling plants at Hindupur in Andhra Pradesh, and Guwahati in Assam.

Today, it is imperative for every electrical and electronic goods manufacturer in India to undertake the Extended Producer Responsibility (EPR) to manage the e-waste they churn out. BinBag extends support to process their e-waste too by collaborating with various other recyclers across India.

How Geeta Goel led the Michael and Susan Dell Foundation to invest of $200 M in education, livelihood and microfinance in India