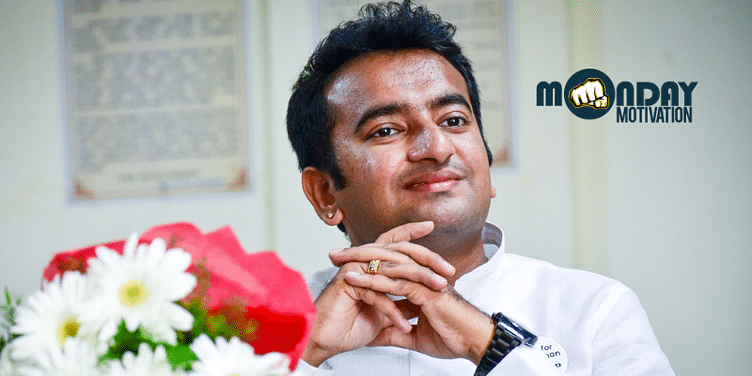 Bengaluru-based Amith Amarnath kicked off with a small spot fix with his friends at a children’s park. After its resounding success, the lawyer founded an NGO called Youth for Parivarthan in 2014 and has since then organised more than 260 clean-up drives.

Popularly known as the Silicon Valley of India, Bengaluru has undergone a sweeping transformation over the years. The city, once characterised by lush green trees, large freshwater lakes and ornamental botanical gardens, is now home to high-rise buildings, cluttered alleys, and piles of garbage.

With rapid urbanisation and inadequacies in the local waste management system, public waste bins are filling up faster than ever. This, in turn, has led to unclean, filthy spaces.

Many individuals, such as 27-year-old lawyer Amith Amarnath, have risen to the occasion to rectify the situation.

Amith began with a small clean-up drive with his friends at a children’s park in his neighbourhood. After its resounding success, the young lawyer started an NGO called Youth for Parivarthan in 2014.

In the last six years, the organisation has cleared garbage and uplifted more than 264 places in and around the city.

“Overflowing trash not only pollutes the surrounding air and groundwater, but also poses multiple health risks. Despite people spotting garbage everywhere, they hardly do anything about it.

"So, I took it upon myself to start an initiative and founded Youth for Parivarthan with my friends. And, fortunately, with the support of several young volunteers, we have been able to keep the mission alive till date,” Amith tells SocialStory.

Born and brought up in Bengaluru, Amith was pursuing his law degree from Christ University when he came across a quaint park in Banashankari that was filled with litter.

He heard most of the residents living nearby complaining about its poor condition and blaming the government for non-maintenance. But, none of them seemed to be thinking about bringing in a positive change themselves.

The then 21-year-old got together with a few like-minded friends and began cleaning the park. After sweeping the walkways, clearing the dried leaves, and transforming the dark spot into a beautiful space, Amith posted a picture on his social media handles.

“To my surprise, we got a great response from people. This encouraged us to organise more clean-up drives,” Amith recalls.

He faced a slew of challenges while setting up Youth for Parivarthan. The organisation had to purchase a lot of supplies and equipment, such as brooms, shovels, gloves, masks, and paint to spruce up public places. However, not many were willing to donate money for it.

Amith was left with no choice but to use his own personal savings. By then, he had also bagged a job at a law firm. Eventually, his friends and acquaintances began pitching in too.

“The approximate cost of organising a clean-up drive is between Rs 8,000 and Rs 15,000. There were many instances during our initial phase where we barely had any money. Once, we were left with only Rs 600 in our pockets. We thought that it marked the end of the NGO. Luckily, we survived,” Amith says.

Today, Youth for Parivarthan garners most of its funds from residents, individual donors, corporates, and online crowdsourcing platforms like Milaap and Ketto.

After Youth for Parivarthan’s first few clean-up drives, many people started writing to the organisation with requests regarding specific filthy localities. In addition to these leads, Amith also collaborated with health inspectors and garbage contractors across the city to identify areas that needed a round of cleaning.

“Before proceeding with any lead, we undertake a survey to figure out if it’s genuine. We also talk to residents and raise funds from those willing to pay. This is done mainly to inculcate a sense of responsibility so they maintain the spot in the long term,” Amith says.

All spot fixes are organised on Sundays to enable students and working professionals to participate. The NGO has been leveraging social media platforms like Facebook to put up details on spot fixes, including the venue and timings. A fixed one-time fee of Rs 100 is collected from only those individuals who walk in for the first time.

The YFP team also maintains a database of the names and contact details of the volunteers. Every time a drive is organised, they are notified either on WhatsApp or via email.

“Even after the outbreak of COVID-19, we are witnessing immense participation from people. This is probably because they are bored of sitting at home. We have been implementing all necessary safety precautions,” he says.

Amith says his biggest source of motivation are the enthusiastic volunteers who join YFP’s clean-up drives on a Sunday morning and spend at least half a day working for the betterment of the environment.

The lawyer plans to continue his endeavour, and is also keen on motivating other citizens and NGOs around the country to take up similar drives.

“There can be real transformation only when people start treating public places like their own,” Amith says.