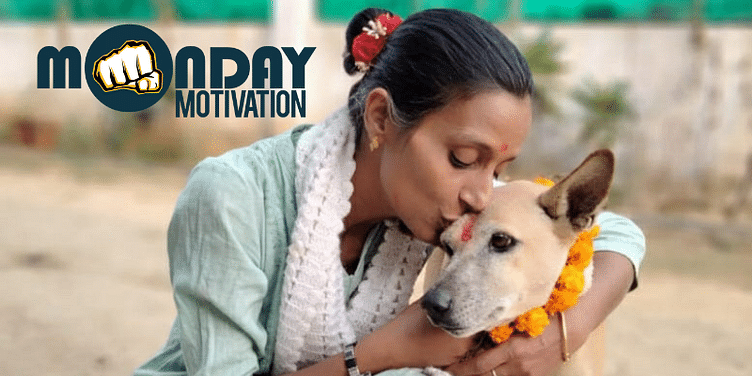 Kaveri Rana Bhardwaj opened an animal shelter in Greater Noida to cope with the loss of her pet dog. She runs the Sophie Memorial Animal Relief Trust, which rescues and treats disabled animals, particularly dogs.

They say that dogs are a man’s best friend, but Sophie was more than just a friend to Kaveri Rana Bhardwaj; she was a lifeline.

The first dog that she rescued, Sophie held a special place in Kaveri’s heart. And she was heartbroken when her pet passed away at the age of 12.

“She was my first pet daughter and we lost her to, can’t say old age, but to a disease when she was just 12. I couldn’t cope with her loss, and the only thing that filled the void was doing something meaningful. I found that meaning in rescuing helpless and disabled dogs,” Kaveri shares with SocialStory.

Even though rescues were a part of Kaveri’s schedule, it wasn’t a full-time job until Sophie’s passing in 2017.

After that, she co-founded Sophie Memorial Animal Relief Trust with her husband, Yashraj Bhardwaj. There were no animal shelters in Greater Noida, when the couple opened the first animal shelter in the city, the SMART Sanctuary.

Often referred to as the ‘Dog Mother’ of Noida. Kaveri shares a very special bond with dogs, and often refers to them as her “babies and children”. She now spends a major portion of her time on rescues.

When asked about how she plans her time, she says, “I don’t. The job that I do is quite unpredictable and you never which one of the babies needs help.” In fact, Kaveri lives with 12 puppies in her living room, so regular sleep cycles are out of the question for her husband and her.

So, just after having rescued an obese, pregnant dog that was too unhealthy to give birth, Kaveri had a conversation with SocialStory, speaking about her journey so far with the trust and the adventures that each day holds.

After making the choice to dedicate her time to animals, Kaveri says she stands strong due to the support of her husband. A freelance digital marketing professional, he also dons his cape and drives the ambulance of the trust. In fact, he makes it a point to do it himself since he doesn’t think that other volunteers understand that an injured dog needs special care.

The main driving force, apart from being an ardent animal lover and passionate social worker, is Kaveri’s strong disagreement with the current treatment of disabled dogs – that is what keeps her going.

“Most often, dogs whose spine has been damaged are put to sleep. While this may seem the ‘humane’ way for some, I completely disagree; I believe they deserve a fair chance at life,” she says.

“Even though some of them don’t make it through, it is really heartening to see them recover and get back to their normal life.”

Based on the condition of the dog, Kaveri and Yashraj take a call on whether they need treatment or admission into a hospital. If the dog can be treated at the spot, they do that with the support of a hospital in Ghaziabad, Canine and Feline Critical Care Unit. The hospital supports them in surgeries, treatment, post-ops, medical, and other needs.

While some of the money for the treatments goes from their own pockets, the duo relies on donors to help out with surgeries that involve high costs.

“Some of their treatments require titanium plates and other expensive equipment, which is otherwise hard to manage.”

Through one such successful campaign at ﻿Milaap﻿, Kaveri and Yashraj managed to raise money and were able to build a home for 120+ dogs, and the capacity to go up to 500 dogs, in Greater Noida. The shelter home, SMART Sanctuary, also has a Canine Paralysis and Rehabilitation unit.

The duo only had a plot of land on rent when they started raising funds. They had to put in a lot of efforts to develop the plot, but then the Milaap campaign happened.

“The sanctuary has different enclosures for different types of ailments and animals.”

The land, almost an acre, was filled with topsoil. The quarters are made with top quality tiles as “most dogs have a tendency to drag their hind limbs when injured. These tiles ensure they don’t get sores on these limbs”.

Moreover, the sanctuary is built to allow the animals access to ‘pakka’ (structured) and ‘kaccha’ (unstructured) areas, which help in their therapy.

A shed within the sanctuary, away from the dogs, fosters calves, donkeys, nilgais, and camels that were seized in a raid. Many disabled animals, including cats, and calves, who were injured during the lockdown, are also housed in the sanctuary.

However, the most common animals that find their way to this safe haven are dogs. In fact, while they have treated and helped over hundreds of dogs, about 130 of them stay at the sanctuary.

“We see a number of cases on a daily basis – dogs without limbs, blind dogs, deaf dogs,” Kaveri says.

The organisation also runs sterilisation camps and mass vaccination drives in nearby villages where there are no veterinary hospitals. The team also rescue snakes and release them into the forests of Greater Noida.

“It took a lot of work to convince people to not kill snakes. So when we get a call, we go ahead and rescue these snakes. In fact, the ‘saperas’ (snake catchers) hate me for doing this for free,” Kaveri says.

However, even though things are running smoothly and the team manages to work for animals, the road has always been bumpy. Insufficient veterinary care, funds, haters – these were some of the biggest hindrances in Kaveri’s journey.

“While a few appreciate what you do, many hate you. For them, you’re just a kuttawali (dog lady). When we rescue dogs who are injured, it’s natural for them to whine and bark because of their suffering, often creating a ruckus. This often triggers a lot of neighbours and RWAs, who’d often pick a fight with us,” she says.

“But when people see the good work that you’ve been doing, the challenges melt away. This is a lot more rewarding than any of the challenges we face every day.”

Impact of the pandemic

At the sanctuary, the team provides a balanced diet, dry and cooked food, for animals. But when the lockdown happened, donations fell, deliveries were hit, and dry food went out of stock.

The team has 10 permanent members, and volunteers who help out from time to time. However, the pandemic led to a shortage of volunteers. Rumours about dogs being carriers of the novel coronavirus disease also affected adoption rates.

But things changed when Prime Minister Narendra Modi talked about adoption of strays on his Mann ki Baat programme.

“One good thing I observed during the lockdown was that the number of disabled cases dropped drastically, owing to the empty roads,” Kaveri says. “But that changed once the lockdown was lifted.”

Since puppies cannot be accommodated with larger dogs, Kaveri and Team Sophie Memorial are opening a rehabilitation unit for puppies before 2021. “Puppies with spinal and brain injuries can be admitted for rehabilitation and therapy,” she says.

The crowdfunding campaign on Milaap is still ongoing; the idea is to set up a free veterinary hospital to provide free treatment for all animals.

Speaking about her life mission, Kaveri says: “More than me being selfless, these babies brought me back to life after Sophie’s passing. When you save them, they end up saving you in return.”