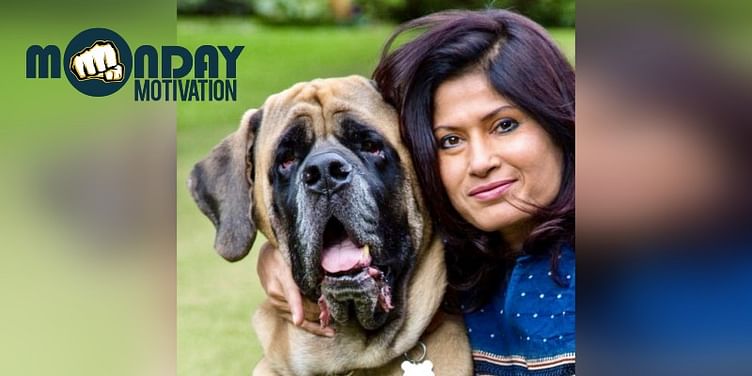 One of the Founder Trustees of People for Animals, Alpana Bhartia has been working in the field of animal welfare and wildlife conservation for the past 25 years, and says that change can only be imparted when you reach out to the other side.

How does one make people understand that the lives of animals are intertwined with our very existence? According to Alpana Bhartia, one of the Founder-Trustees of People for Animals, an NGO that works on wildlife rehabilitation and ecological conservation, empathy can be best imparted by first creating awareness among children.

An honourable animal welfare officer, Alpana has been working in the field of animal welfare and conservation for the past 25 years. She is a constituted member of the Institutional Ethics Committee of the National Centre for Biological Studies (NCBS), and has been nominated by the Government of India to the committee for Control and Supervision of Experiments on Animals.

Being empathetic towards animals is something Alpana had learnt right from her childhood. Born in Kolkata to a traditional Rajasthani family, she had grown to become very fond of pets and animals as her father always kept dogs.

“When I was in school, I was in the swimming team and couldn’t attend the nature meetings and trips conducted by the school. My friends used to go to the Sunderbans forest and interact with the different wildlife zones. I really used to envy them, and I still feel that every child should interact with animals from a young age,” she recalls in a conversation with SocialStory.

She then moved to Bengaluru after marriage and became a teacher at St Joseph Boys High School, but 10 years later, a call from a friend gave her an opportunity she had always been looking for to work for animals.

“A friend of mine asked if I would join Maneka Gandhi, who used to then broadcast a TV show called Heads and Tails on animal issues. I had been watching the show and I was pretty influenced by how passionately she spoke about wildlife and protection. It was absolute animal welfare, with no stones unturned. The call from her was that we start an animal welfare organisation in every state and district, and even at school levels,” she narrates.

These 5 organisations are rescuing wildlife and endangered animals

So, under a nationwide initiative of political leader and animal rights activist Maneka Gandhi, Alpana, along with Namrata Dugar, Gauri Maini Hira, and Arushi Poddar started People for Animals (PfA) in Bengaluru. The aim of the NGO has always been to provide veterinary care to injured urban animals and release them into their natural or adopted habitat. Over the years, the organisation has rescued and treated more than 25,000 wild animals across 200 species.

But one of the primary goals that the NGO still works towards is to create awareness about wildlife and instil deep regard for cohabitation and welfare of animals.

In the beginning, PfA was involved in many ecological projects such as Save The Tiger, saving the trees of Karnataka, and rescuing tuskers from abuse. The challenge they faced was around how to make people aware of environmental and ecological problems – something that was new to most of the population.

In Bengaluru, there was a circus which had started performing at the time, and it would showcase animal tricks – including animals from the wild. Alpana and others started working hard to try and stop the circus, and prevent them from holding wild animals in captivity. To achieve that, they went to schools to talk to children.

“The first question I would ask – where does your water come from? I would explain to them that the tiger gives you water. It captures the child’s imagination. If the circus people capture the tiger and remove it from the forest, the deer can roam around freely and eat all the grass it wants. They don’t have to move from patch to patch, and the entire grass gets eaten up. When it rains, the rainwater washes away the entire soil and dumps it into Thippagondanahalli Reservoir, which supplies water to Bengaluru. This affects the city’s water supply as well,” she explains.

Alpana has also done stealth operations and captured photos of lions in the circus who had lost weight as they were regularly underfed, and had spots all around their bodies – from the heated iron rods used to make the animals submit to them out of fear. She showed the visuals to the children and made them understand captivity in their own language.

She would tell them, “The only one thing that the tiger and lions are scared of is fire, and the circus makes them jump through a ring of fire. This shows that the animal is not doing this on its own will but out of fear.”

She would use such examples to impart environmental education to children at schools, something which was not present in the curriculum.

“When I heard about the circus in Bangalore, I took my daughter and my niece’s children. They painted their faces, made banners and stood in front of the circus. They were speaking to other children and many children there itself turned around and refused to visit the circus. When the circus people saw people turning back, they called the police. The police came and asked us who was behind the protest, and I said it’s these three children. You can arrest them if you like. These children were so proud of themselves to have made a difference. All you need is one child to make an impact,” she narrates.

Environmental and wildlife awareness wasn’t something people largely thought about in the 1990s. The Environment (Protection) Act has only been passed a few years ago in 1986.

While Alpana says that people have become more concerned about the health of their surroundings, that was not the case earlier and she had to face angry parents who had bought tickets to the circus, but their children had now been refusing to visit it after listening to her talk about the importance of wildlife.

In the late 90s, she went to 56 villages in rural Bengaluru who had been practising ritual hunting and religious sacrifice of the wildlife. She, along with volunteers from PfA, approached schools and village women to educate them about the cruelty of such practices. But things didn’t go as planned at first.

“One day, I had taken my husband’s car and all these villagers were blocking the road with their tools and farm equipment. I was scared that they would break the car. But all the volunteers came out of the buses and stood with folded hands and the situation got resolved,” Alpana recalls.

Nevertheless, she persisted and for five years, the team kept on visiting the villages. Eventually, the ice broke and the same men who had stood in front of her car now invited her to their houses and offered welcome drinks.

“When you show to people and explain to them, without preaching or telling them what to do, people understand,” she says.

The organisation also initially had a tough time raising funds for animal welfare.

“I remember once going to the then Governor of Karnataka asking for his support, and he said to me, ‘why is it called People for Animals and not People for People? First, you should take care of people because we have so many people in the country who are poor.’ It made me realise that unless we bridge that gap and reach out to people on the other side of the fence, we won’t accomplish much. We can’t badger them into understanding your point of view, and we need to speak to them on their level,” she recalls.

Today, PfA has grown into one of the largest animal welfare organisations in the country. It has disbanded elephant training camps, put a stop to ostrich farming, worked on preventing the illegal slaughter of camels, and enabled confiscation of illegal domestication and commercial exploitation of various protected animals including macaques, parakeets, jackals, and snakes.

During the lockdown, the NGO was largely involved in conducting feeding programmes with food ambulances to feral dogs, cats, cows, and horses.

“We think of wildlife as the tiger, the polar bear etc, but every city is blessed with wildlife,” Alpana quips.

Currently, the organisation is working towards establishing a state-of-the-art wildlife rescue rehabilitation centre. It also aims to open wildlife hospitals across the country – something which is rare in the subcontinent. The organisation is also planning to make wildlife programmes cheaper and more efficient, establish training centres for vets where they can also train each other, and set up wildlife care zones at the district or village levels.

Alpana continues to remain focused on teaching programmes, such as that of Veterinarians across SAARC Nations.

“All you need is one person to make the change and you would get the support. People are out there and solutions are out there to help you. When children are exposed to humane education, I think most of the battle is won,” she concludes.

Towards Kuposhan-mukt Bharat: Freeing every child from anaemia can make all the difference