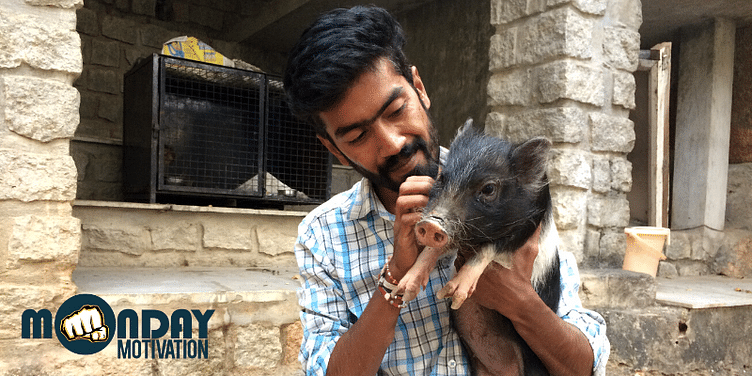 Despite facing many obstacles in his path, Pradeep Nair stuck to his passion and dedicated his life to the wellbeing of animals. From volunteering with the Blue Cross, laying the foundation for an NGO, to rescuing and treating over 70,000 animals, he has done it all.

Thirty-five-year-old Pradeep Nair’s love and adoration for animals go beyond hugs and cuddles. A web developer by night and an animal rescuer by day, he has been stepping out of his comfort zone to provide solace to the amiable creatures.

Born in the quaint town of Sathupally in the Khammam district of Telangana, Pradeep’s tryst with animals began when he was just 11-years-old. After keeping a parrot in an enclosure for days, he discovered the joy of releasing it, and from then on, there was no looking back.

From volunteering with the Blue Cross, a UK-based animal welfare organisation, laying the foundation for an NGO on his own, to rescuing and treating more than 70,000 animals, Pradeep has done it all.

Many a time, Pradeep has helped liberate trapped and injured animals using tactical methods. Rescuing a rollicking, furry kitten from a borewell was one such instance.

After receiving a call from one of the citizens living in the outskirts of Hyderabad about a kitten falling into a 70-feet deep and 6 cm wide borewell, Pradeep and his team rushed to the scene. Recalling the episode, Pradeep Nair says,

“After putting some thought into it, I lowered a rope with a bag made from mesh, so that the little one could cling onto it. The entire operation took about three hours. It was an extremely tricky and stressful situation. However, when the kitten finally saw the light of day, I was relieved and overjoyed.”

Today, Pradeep has extended his endeavour in the field of animal welfare. He not only gives animals a new lease of life but also organises several preservation programmes, awareness campaigns, and training workshops as part of his NGO Animal Warriors Conservation Society.

The breaking of a new dawn

After completing his engineering from the Mother Teresa Institute of Technology in Sathupally, Pradeep moved to the city of Nawabs, Hyderabad, in search of a job. Very soon, he started freelancing in the space of web development, and spent his time creating designs and writing complicated codes based on client requirements.

A year later, in 2006, Pradeep founded a web development firm named Acetrix along with his brother-in-law. It was around the same time that he re-connected with his affinity towards animals.

“Back then, when I was still a child, my father had placed an old, dilapidated school bag of mine in the compound of our house. A few days later, a flock of sparrows landed up making a nest inside it. And, every single day, I used to watch and admire them. Since I was a curious kid by nature, I even made an effort to read about their migratory practices, methods of flight, and food habits. Well, all these fond memories were revived when I spotted a wounded monkey near my apartment in Hyderabad,” he recalls.

Instantly, Pradeep tried to rescue the injured animal, but it escaped. That was when he found the contact of Blue Cross on the internet and called them. After seeing the relief provided by its professional team of rescuers, Pradeep, too, signed up to be a volunteer with them.

Eventually, Pradeep learned to rescue injured, as well as sick animals. If the bruise is not very grim, he started treating them himself using basic first aid tools. For serious ailments, he generally arranged for transport and took them to a shelter or a veterinarian.

Besides working with the Blue Cross, Pradeep also took the plunge of starting operations independently by putting in his personal funds. Many times he led animals to his office to administer care and give them some space to recoup. Alternately, he also built a temporary dwelling for animals on his terrace, and termed it ‘pocket shelter.’

Soon, Pradeep began receiving a slew of calls from individuals across Hyderabad and the surrounding villages to save injured and sick animals. In fact, there also came a point where he had to choose between his career as a web developer and as an animal rescuer.

“I think it was my steadfast belief and unflinching affection for animals that drove me to opt for the latter. So, I quit from the firm, and formed a Facebook group titled ‘Animal Warriors India’ specifically for animal rescue and welfare, involving a few like-minded people and volunteers,” says Pradeep.

He also spent a great deal of time researching and learning about techniques to retrieve different types of animals, including some of the wild and aggressive creatures. In order to master the rescue of snakes, Pradeep volunteered with the Friends of Snakes Society for a few months.

Right from picking up an injured buffalo from a railway track, restoring a civet cat into its habitat with just a cardboard box, releasing a pigeon from an entangled nylon manjha, to treating a baby porcupine — Pradeep executed many rescue missions.

Bringing animals back to life

Located amidst clusters of palm trees on one side and the tranquil banks of the Malampuzha dam on the other, is the town of Shoranur in the Palakkad district of Kerala. It is Pradeep’s ancestral home from where he temporarily shifted base in 2018.

When severe floods hit the state in the latter half of that year due to unusually heavy rainfall, Pradeep, along with the volunteers part of the Animal Warriors group, stood at the forefront to rescue over 450 street dogs, cats, and other farm animals.

“When natural disasters like floods, fire, and cyclones occur, there are a lot of efforts that are taken up to evacuate and provide relief to the people affected. However, not much of significance is placed when it comes to saving or offering medical aid to animals. So, when I witnessed the calamity in Kerala, I took the initiative to help them. My team and I had to traverse through tough terrains and even risk our lives to assist the fauna,” notes Pradeep.

Once the water receded and things started getting better, Pradeep returned to Hyderabad to establish Animal Warriors Conservation Society, an NGO dedicated to animal rescue, conservation, and awareness. The organisation was formally registered in 2019 with 21 volunteers on board.

To preserve the habitats for animals, the NGO is engaged in conducting lake clean up drives, setting up houses and water bowls for birds, and manja clearance initiatives. Besides this, Pradeep and his team are spreading awareness about animal welfare through various events like drawing competitions, rescue training workshops, and nature walks, across educational institutions in and around Hyderabad.

To raise funds for medical care, transport, and other rescue equipment, the NGO has kicked off a crowdfunding campaign on Milaap. It has already garnered around 40 percent of the Rs 20 lakh it had pitched.

When asked about the major challenges faced along his journey, Pradeep said,

“My family members and relatives were not very supportive of my decision to quit web development. Since I had completed my engineering, they were all very particular about me continuing my career in the field. Many of them discouraged me from working towards animal rescues and also told me that I was ruining my life by doing so. But, luckily after witnessing the positive impact I was creating, they changed their opinion.”

Pradeep stuck to his passion and dedicated his life to the well-being of animals. The 25-year-old was recently recognised with the ‘Heroes of Hyderabad’ award for his work towards animal welfare by Radio City.

“I am planning to continue my efforts in the near future, and also form multiple rapid response teams to rescue animals during disasters,” quips Pradeep.