Serving warmth following a disaster: How Sewa International is helping communities in Uttarakhand 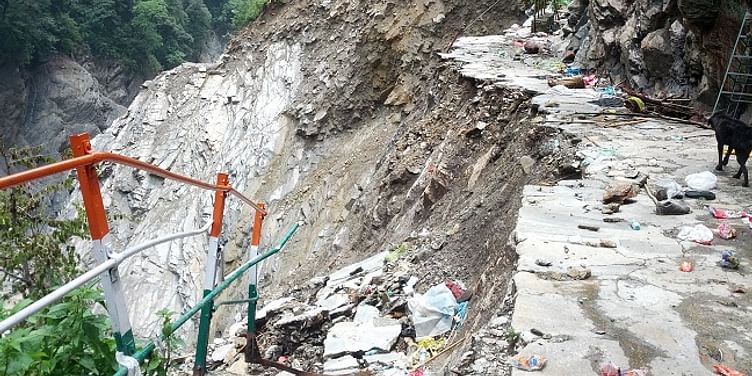 Sewa International provided medical care, food, and grief counselling in the aftermath of the devastating floods in Uttarakhand

For the last one month, our team has been camping at the Tapovan power plant disaster site in Uttarakhand.  The team met hundreds of victims and the families of those missing/dead in the last couple of weeks. Asha Negi (name changed for privacy) is one of them.

When we met her three weeks ago, she was numb, sitting expressionless at the corner of the temporary relief camp in Tapovan. It seemed her body had no energy left, even to cry. She was in a state of complete shock and despair. Our team member sat beside her for more than an hour, struggling to find the right words, before she finally spoke. When we asked Asha how she was,  she turned her eyes towards us, and seemed to be noticing us for the first time in the last few hours.

She started telling her how she refused to leave Uttarakhand to work in an urban construction site. She had decided to start a local handicrafts shop after taking a loan, while her husband was working in a factory in Dehradun.

“Jyada kuch nahi tha humare paas, parr jitna tha usme hum khush the. Kam se kum, hum humare logon ke beech the, humare apne gaaon me (We did not have much, but we were content with what he had. We were among our people and in our village).” she mentioned.

However, the deadly pandemic was like an eclipse on their happiness. Her husband was left without any job as the lockdown was imposed, and the shop was forced to remain closed. The stress to feed their family of five, and the debt on their handicrafts shop seemed to grow every day in the shadow of the pandemic.

The year 2021 had brought some hope for Asha and her family. Their shop saw customers returning with the tourists visiting the Himalayas for the new year, and her husband found a construction job at the dam site just 90 km away from their home, in the neighbouring district.

Her voice grew heavier as she recalls February 7. She was having lunch when she heard her neighbour  screaming loudly.

“Sab kuch khatam ho gaya, jaldi chalo sare majdoor surang (tunnel) me fase hain, bachna mushkil hai unka” (We are finished. Come quickly, all the labourers are stuck in the tunnel. They will not be able to escape.)

As she came out of her home, Asha realised that this was the same tunnel her husband was working in, the Tapovan Hydro-power plant project, which now has been swept away by the flash floods.

She rushed to Tapovan with her neighbours, and after six days, her husband’s dead body was recovered from the tunnel. At this juncture, she broke down.

Two days after this, she gained consciousness. With guilt and helplessness, she immediately checked on her children’s well-being. She found solace in the fact that her children had  food for two days. She finally ate something, after the constant insistence of her neighbours, who reminded her that she had to look after her children alone. For her, the food was a mixture of grains, warmth, and hope.

The community kitchen, which brought this food, was run by local women, coordinated by a non-profit organisation, called Sewa International, and had started within 10 hours of the disaster.

While she was still figuring out how to put together the incomplete pieces of her life, she found people whom she could talk to and express her grief. These were specially trained volunteers (on trauma counselling) working at the relief camp set up by Sewa. Asha returned to the village two weeks ago, but the counselling volunteers are regularly in touch over phone calls.

It is not just the community kitchen and trauma counselling, but Sewa was also the first to issue the public warning. This was done using a social media live video on the incoming disaster, that warned, not only the locals, but also the authorities and media about the flash floods.

Within a few hours, the Sewa International mobile health van had also arrived at the powerplant site, to support the rescue operations. It was equipped with facilities for first-aid, ECG, X-Ray, pathology lab, and oxygen masks. This health van was manned with trained medical professionals providing instant support to the victims of the disaster, providing medicines, and carrying people to nearby health centers as needed.

Sewa International has been working in the area for the past six years, and with prior experience in routes, and community connections, Sewa also guided and helped the rescue teams of NDRF and SDRF (National and State Disaster Response Force).

From the third day of the disaster onwards, Sewa International moved to the inward pockets of the Himalayas, using the hand-operated trolleys to cross the mighty Dhauliganga river to reach the impacted communities.

For the past one month, the team has been  working restlessly and doing their best to help the victims. The SHGs, which had been set-up by Sewa for the last five years, are now acting as the extended arms of the relief teams in their parent villages, packaging ration kits, running community kitchens, and assisting the trauma counselling, providing a great help to fellow villagers. Many members from the rescue teams of NDRF and the army continue to have their food and shelter in the sewa camp-site in Tapovan and Raini village.

While the rescue operations for the missing people are now finishing, women team members are constantly spending time with the affected communities trying to provide solace and counseling to reduce their grief and bring back normalcy in their lives. With more than 40 affected villages, more than 60 team members are currently engaged in these services. It’s almost a month now, but the grief of losing a family member, or losing their livelihood continues to cast a long shadow on their lives.

The connectivity to some affected villages has been completely lost, and the team is on their toes providing food packets, and other basic needs to these villages. The field team is constantly traveling through villages, working with the local administration to identify missing people and estimating the loss of infrastructure in the villages.

To enable all these, we need your support. Please check out our work in Uttarakhand over our website .