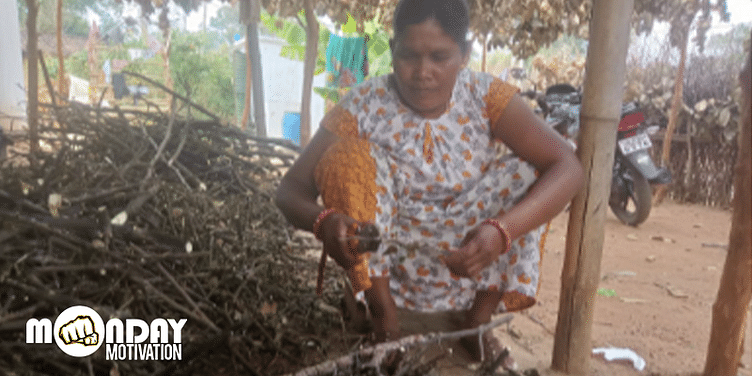 In this week’s Monday Motivation, Jharkhand-based tribal woman Sushana Guriya talks about how she was able to increase her income from Rs 25,000 a year to over Rs 3 lakh from her lac harvest.

Sushana Guriya is a tribal woman from Jharkhand’s Khunti district. Despite receiving above-average rainfall in the monsoon, and a wide network of rivers and streams, the families with small landholdings struggle to make ends meet and earn a livelihood off their farms.

Lack of information on how to develop the land, poor infrastructure, and limited market access have made the situation worse. Many have left their villages in search of jobs in the city.

Sushana’s family of seven, including her two children, were entirely dependent on the income that the 27-year-old and her husband would make from cultivating the land for three months in a year and as daily wage labourers.  Her land lay fallow for the rest of the year. The family struggled with trying to make ends meet on Rs 25,000 a year.

In 2017, the family’s fortunes changed when Sushana joined 21 other tribals and went for a one-week lac processing training at the Indian Institute of Natural Resins and Gums (IINRG), Ranchi, with the support of Torpa Rural Development Society for Women (TRDSW) and Edelgive.

Lac is a type of natural resin secreted by Kerria lacca or Kerr — a tiny insect that is intentionally reared on the barks of indigenous trees like palas, kusum, and ber. These insects secrete a sap that encrusts the branches of the trees. This resin is later scraped off and used in the production of shellac found in dyes, resins, wax, cosmetics, and pharmaceuticals.

The training turned out to be a turning point in Sushana’s life. “No one in my community was aware of the value of lac and that it could be cultivated throughout the year,” says Sushana. “It does not require much time and labour, and only the timing of processing needs to be maintained,” she says enthusiastically.

Following the training, she started cultivating the kusumi variety of lac on seven ber trees on her land. She extracted the final lac produced from these and stored the entire harvested lac as seed for the next year.

In fact, she was able to cultivate more ber trees and kusum trees. With a gradually increasing yield, at present, she harvests lac from 25 ber trees and five kusum trees and has even involved her family members in the business.

She has sold the final produce more than five times, earning over Rs 3,00,00 only from the lac business. “In the past three years, our income has increased more than three times,” she says happily. But Sushana is not content to just sit back and focus only on her family’s improved fortunes. She also feels particularly strongly about the independence of tribal women.

“It is never an easy task for a woman, especially a local tribal woman to stand on her own feet economically, and be able to support their household requirement,” she says.

Today, she has mobilised and trained over 500 women in her area to start lac cultivation on their small landholdings so they too can provide a better life for their families.

From a madman to changemaker: how Swapnil Tewari beat the odds to bring hope to others