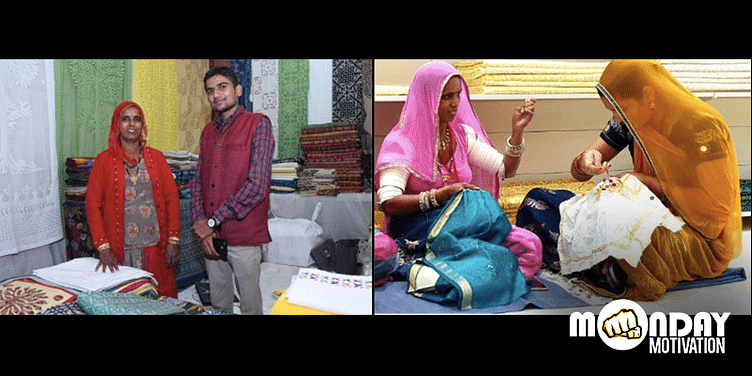 From struggling to make ends meet, Sugdi Devi’s work has not only been used by leading fashion designers, but she has also trained students at leading fashion institutes.

During the Partition, Sugdi Devi was among the millions who left their homes in Sindh to build their dream life in Independent India. She settled down in Dhanau in Rajasthan. Times were difficult for her family and after her wedding, the family struggled to survive, depending solely on her husband’s family.

“We were happy, but life wasn’t easy as we were struggling to make ends meet. I decided to help earn more money and put my love for embroidery to good use. I wanted to ensure a good education for my children so that they did not have to struggle later in life,” Sugdi Devi says.

Other than her husband and children, Sugdi Devi’s only source of joy was her needle and thread. She realised that it would not be possible for her to educate the children with her husband’s income alone. His earnings as a craftsman with a private firm was barely enough to make ends meet. She started working privately and began to earn about Rs 5,000 a month. But life with four children was still a struggle.

“That’s when I heard about Ruma Devi, who is the president of the Gramin Vikas Evam Chetna Sansthan (GVCS), and the work she was doing to empower rural women. I decided to sign up and train in hand-embroidery and applique.”

Founded in 1988 by Vikram Singh, GVCS has been actively empowering rural women in Rajasthan since 2006, making them financially independent. Sugdi Devi also took the Skill Development Training programme to become a Master Trainer and has since helped over 11,000 women at the GVCS.

Over the years, her handiwork has received a lot of attention and she has even worked for leading designers. “I have even walked the ramp at a few shows,” she says.

One of the highlights of her life she says has been an opportunity to attend Kaun Banega Crorepati, where she supported Ruma Devi, who was invited as a special guest on an episode of Karamveer.

“I even had a chance to meet and speak with Amitabh Bachchan,” she says. In recognition of her creativity and contribution to training other women and changing their lives, she was presented with a special award by the District Administration of Barmer.

She has also been featured in nine editions of Patrika Newspaper for her contributions to providing specialised training and workshops to many other women who may need support and guidance, under the guidance of GVCS.  She has organised workshops at leading fashion institutes across the country too, including the National Institute of Fashion Technology, despite struggling with speaking Hindi.

“I am so happy that I am among those making a change for women who come from conservative backgrounds like me. We live in societies that still hold on to age-old beliefs when it comes to women’s independence. We should be confident and be able to provide for our children,” says Sugdi Devi.

“I was offered Rs 1 lakh to travel to Manav village, which is on the China border and train villagers there. It  was a major recognition for me. Today, I continue to train women, both young and old, in my area so that they become financially independent,” she adds.

But her best achievement, she says, is that she has been able to educate all her children.

“I am earning more than Rs 15,000 a month. My eldest daughter Hemlata has completed her Senior Teaching Certificate, my son Jagdish is at the Indian Technical Institute, and my younger two children, Durga and Ravi, are finishing high school,” Sugdi Devi says proudly.