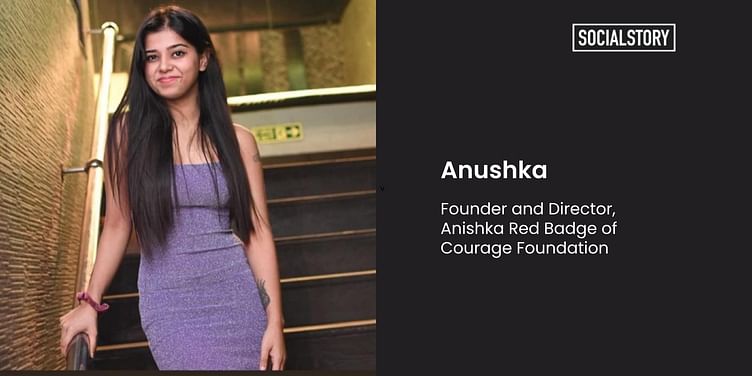 Anushka is using Naari, her NGO working for women, to amplify the conversation on the financial incapacity of many women to afford menstrual products, the problem of period poverty in India, and the state of abuse victims.

Anushka, a final year law student of UPES School of Law, Dehradun, was on vacation when she learned about the demise of her domestic help due to severe infection in the genital area. On returning home, she researched and found that one of the contributing reasons to her death was the fact that her help, and most women in her village, used the same cloth again and again during their menstrual period.

“Why isn't India able to provide such a basic need to people,” Anushka wondered.

This thought provoked her to have a conversation with the rural women of Jamshedpur.

“Initially, they were very reluctant and hesitant; it was very difficult to talk about menstruation,” says Anushka, adding that for them making money to put food on the table was the priority.

It took a lot of convincing for them to talk and understand the concept of menstruation and everything around it.

Eventually, Anushka started her NGO Naari, now registered as Anishka Red Badge of Courage Foundation, in August 2020 in the midst of the pandemic.

She began with a door-to-door service, distributing sanitary pads.

Anushka had received the ‘Young Researcher Scholarship Award’ for her paper titled ‘Criminalising of Marital Rape in India: A Distant Dream’ and had also penned a book on the same topic. This was published in 16 languages across the world, and she used the royalties to fund her purchases.

“In the beginning, it was just five women who came up to me to understand more. I also understood that there are a lot of taboos around menstruation,” she says.

Anushka was adamant about leading the distribution efforts herself - so as to also know about the ground-level problems and learn if women were using the sanitary pads.

Meanwhile, the youngster faced criticism from the urban society, with many women, including relatives, saying menstruation was not something to be discussed openly or to be worked on at the start of her career.

However, this did not deter Anushka. She, in her capacity, amplified the conversation on the financial incapacity of women in some parts of the world to afford menstrual products, the problem of period poverty in India, and continued to provide sanitary napkins to underprivileged women as well as expedite responsiveness towards this concern in urban India.

Today, with a team of 25 people (including volunteers), Anushka is happy to see change among the women. She says, “Now women come voluntarily to my office in Jamshedpur to collect napkins every month.”

As of now, her team has served over 9,000 women in Jharkhand and West Bengal.

Even before starting Naari, things were not easy for Anushka. The need for a change was triggered by a life-changing moment where she had to stand up “not only for myself but all the girls and women out there”.

“I was in an abusive relationship. This person pushed me to the brink of breakdown. I was under medication for depression and severe anxiety for years,” she recalls.

With the support of her father, she pulled herself together and dealt with the physical abuse by talking openly at public forums.

“Being a law student, if I start taking this harassment, how will I raise my voice for others?’ she recalls her thoughts during those days.

Anushka used her education and advocacy skills to create awareness on women-centric issues by engaging communities in discussions and assisting women. She went to the National University, Singapore, and presented her paper.

However, she soon realised that she was not the only one. “I was surprised to see many women from India and across the world coming to me and talking about the abuse they had faced. I felt that there was no one they could talk to or reach out to,” she says.

Her personal struggles and stories only encouraged and inspired others like her to break the silence.

Anushka, meanwhile, continued to write books and research papers on women-centric issues, and received praise from the New Zealand Prime Minister for her work. She is currently serving as the President of the West Bengal Human Rights Council.

“I want to work towards ending all kinds of discrimination and abuse inflicted upon women,” Anushka says.

Teach For India - Because every child deserves an excellent education