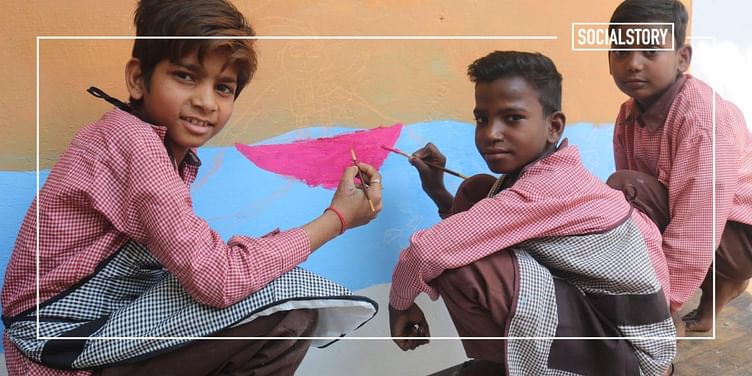 Varanasi-based SHURUA(R)T conducts sessions that not only help students practise arts as a medium of expression but also as an approach to advance their learning.

Art is more often than not considered as a career option in Indian households. Children — who take interest in drawing, singing, or any other artform — are generally asked to focus on their studies, stop distracting themselves with extracurriculars, and concentrate on the ‘subjects that matter’.

Varanasi-based social enterprise SHURUA(R)T aims to change this by providing a platform for artists to sell their work, enabling a career in art.

SHURUA(R)T started with a simple vision of selling paintings made by students of Banaras Hindu University on its ecommerce platform, where 70 percent of the profit generated is shared with a specific artist to help finance their education.

“Arts have been struggling their way into the education system of India. Although they exist as subjects in some schools, they're either forced on the students or treated in the manner of a protocol to make the mark sheet look good. These challenges have made it difficult for us to advocate art education that would benefit children,” Karishma Srivastava, CEO, Shuruart Foundation, tells SocialStory.

At present, the NGO helps groom the artists, making them future art entrepreneurs after they leave college.

Shuruart Foundation was registered as a not-for-profit organisation in Varanasi in March 2020. However, the foundation had been working as Let's Start Art, a project under its parent company SHURUA(R)T since 2017.

Shuruart works towards finding employment opportunities for young and emerging artists professionally trained in universities based in Tier II and III cities.

“Let's Start Art was thought of as an idea for the same. When we started developing the idea into a programme, we realised that art is not a part of the formal curriculum in government primary schools, which pushed us further to look for children's responses to art education,” says Karishma.

Let's Start Art was now not only an employment opportunity for artists but a substantive idea to work towards improving classroom practices and learning experiences for children studying in Varanasi’s primary schools.

“We started with conducting art sessions at regular intervals in one school. Gradually, we spread the programme to five schools. As the year progressed, teachers started telling us how children, who rarely came to school, were now regular, hoping and asking for the next art session,” Karishma adds.

Following this small success, in 2018, the NGO expanded the programme to ten schools. Before the COVID-19 pandemic, it was working with 15 schools in the 2019-20 academic year.

Like many NGOs, Shuruart Foundation was hugely impacted by the COVID-19 pandemic as schools were all closed down immediately.

“Students were already on a break after final examinations. When the lockdown began, we tried to connect with the students. We talked to their parents to figure out a way to conduct the sessions on the phone. But it was a tough time for everyone.”

Most of these families had only one phone at home, which would not be a smartphone. Initially, the NGO tried getting a few drawings through WhatsApp, but it became difficult to connect with the students as their parents went out to work as soon as the lockdown started lifting.

While it lost touch with its students for some time, the NGO’s instructors reconnected with them when they came back for the mohalla classes.

The Shuruart Foundation team conducted a few sessions right before the second COVID-19 wave hit. It also made them realise the sheer number of students who dropped out of school to make a living.

Karishma admits that although schools have reopened now, it is going to be very tough to bring these children back to school.

At present, with a team of nine people and six artists as art instructors, Shuruart Foundation is working with 20 schools in Varanasi, with about 710 students from Classes 3, 4, and 5.

It has conducted art sessions in various government primary schools and alternative education programmes in collaboration with different organisations, including Centres of Pratham Education Foundation and Utkarsh Foundation in Uttar Pradesh.

The programmes developed not only helps students practice art as a medium of expression but also as an approach to advance their learning, encouraging them to observe, think, imagine, and read more.

“Feedback from teachers, students' drawings, and the confidence with which children flaunt their artworks while explaining them to us has kept us motivated over the years,” she says.

Karishma says the major cost for Let's Start Art entails the remuneration of the instructors and planning and designing of the programme.

Moreover, its programme execution expenses include the cost of art supplies, conveyance, mural work, marketing, and advertising of the programme.

The NGO has also been conducting the programme through crowdfunding, using platforms like Ketto and Razorpay. Besides, it has a donation button on its website for better navigation.