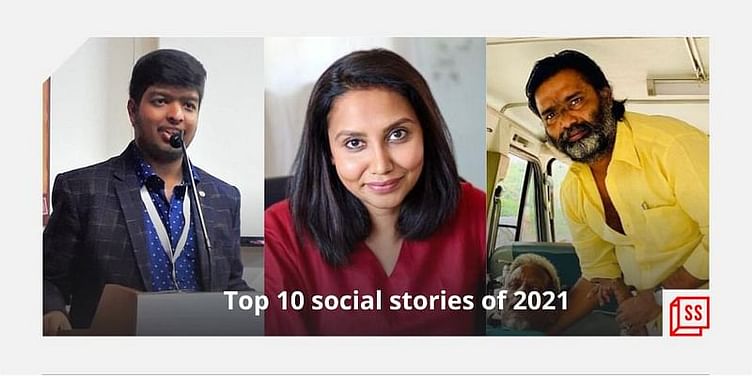 Take a look at 10 inspiring stories of non-profits, communities, and organisations that served humanity this year and made the world a better place.

The past year turned out to be a devastating one for many families as the second wave of the COVID-19 pandemic ravaged the nation. However, in times of uncertainty, many good samaritans stepped forward to offer a helping hand. Many individuals, social enterprises, and NGOs ramped up their efforts to serve others.

This year, SocialStory brought to you the story of how autorickshaw drivers roamed around in their autos in the time of lockdown and transported COVID-19 patients to healthcare facilities. Meanwhile, two teenagers utilised the free time they had at their disposal during the lockdown to research early detection of cancer. Also, with pollution and the environment becoming urgent issues, a woman entrepreneur quit her corporate job to start an eco-friendly and sustainable fashion startup.

Take a look at 10 inspiring stories of non-profits, communities, and organisations that served humanity this year and made the world a better place.

The second wave of the COVID-19 pandemic was devastating for many and overwhelmed not just healthcare workers, but also emergency services. In this time of need, many autorickshaw drivers stepped up to offer their help.

Javed Khan, a Bhopal-based autorickshaw driver, helped people by rushing them to the hospital in times of emergency free of cost. He even sold his wife’s jewellery and converted his auto into an ambulance.

Similarly, Kolhapur-based autorickshaw driver Jitendra Shinde ferried over 1,000 patients with COVID-19 symptoms to the hospital. He began this service in 2020 after the nationwide lockdown was announced by the government in March.

Ravi Agarwal offered free rides to COVID-19 positive patients in Ranchi. He started this initiative after coming across a COVID-19 positive woman who was not being helped by any auto driver. He even shared his number on social media so more people can reach out to him.

Established in the memory of Diana Spencer, Princess of Wales, the Diana Award is given to young humanitarians across the world who “inspire positive change in the future of young people.”

One of the recipients this year is a 21-year-old student from BITS Pilani, Akarsh Shroff, who started his journey in 2018 when he co-founded S.P.A.R.K. in Bengaluru. Since then, with a team of 500+ volunteers, he has co-ordinated over 16,000 hours of volunteering at 11 centres, through four initiatives to impact 500 children.

Mumbai-based Chaitanya Prabhu is the founder of Mark Your Presence — a non-profit and non-political organisation, which works to turn every institution into a voter-friendly campus.

“I aim to strengthen the Indian democracy by registering young voters, educating voters, and encouraging them to actively participate in the world’s largest electoral democracy,” Chaitanya says.

Fourteen-year-old Sia Godika from Bengaluru has seen numerous cases of impoverished people in her neighbourhood living without any footwear. Seeing this harsh reality of underprivileged sections, she laid the foundation for Sole Warriors. The initiative aims to refurbish footwear from privileged sections of society and donate them to underprivileged communities.

Mumbai-based Class XI students Sidharth Jain and Aasimm Khan began researching cancer after Sidharth's grandfather passed away from the disease amid the lockdown.

They decided to focus on genital skin cancer because many people were hesitant to discuss lesions in their private parts, and even more reluctant to have a doctor examine them.

They built a mobile-based app that helps in the early detection of genital cancer, which won them one of the Grand Awards at the US-based International Science and Engineering Fair (ISEF).

They previously placed among the top 10 at the Microsoft Innovation Challenge, one of the largest innovation competitions for students from across the globe. They won the Junior Imagine Cup with their project for using AI for Humanitarian Action in detecting genital skin cancer.

Upskilling teachers to educate the underprivileged

Every day, millions of students living and studying in rural areas struggle to get access to education due to poor internet connectivity and disruption due to the pandemic.

“The teacher in a classroom is the biggest lever that fundamentally makes a difference to the child's learning. And that's where we wanted to focus on when we began our journey in 2012,” Anju tells SocialStory.

CEQUE stands for Centre for Equity and Quality in Universal Education, and aims to improve education by improving the teaching potential of educators.

More than five trillion pieces of plastic shopping bags are used every year. According to Earthnest, fewer than 3 percent of them are recycled.

Vidhi Singhal was very passionate about fashion. In fact, in 2017, she quit her corporate job to start The August Company — a sustainable fashion startup — in Bengaluru.

Vidhi decided to adopt eco-conscious collections that are polyester and synthetic-free with her startup.

Today, the startup works on the three pillars of sustainability — social, economic, and environmental. The August Company’s workforce comprises 90 percent of women. In fact, it pays fair wages and fixed salaries to all its employees.

A sustainable way to donate clothes

Started in 2018 by siblings Yash Gupta and Akansha Gupta, Indore-based NGO Daanpatra is an online platform that collects donations of all sorts - clothes, toys, books, shoes, utensils, electronic items, furniture, and other items, which is basically anything except cash - from the donors’ doorstep and ensures these reach the people in need.

Daanpatra, which offers this service for free, has so far helped more than 11.5 lakh needy families, more than 70,000 Indore residents have joined this platform, and over 5,000 volunteers are connected to this platform.

“There is nothing useless. It is necessary that we should know how the waste material can be put to use. For those who throw away old stuff as waste, Daanpatra will be an inspiration on how we marry technology and charity. Millions of people can be helped by recycling old stuff and their life can be improved,” says Yash.

'Good Samaritans' for the homeless

The lockdown has been particularly hard on the homeless population whose already strained access to food, water, and healthcare became even worse.

This is where AI George Rakesh Babu stepped in to help those in need. But his humanitarian journey started a few years ago.

George would often donate to a Tamilian priest named Ganesh Prabhu, who, despite facing numerous challenges and receiving no support from family or relatives, had been taking care of over 60 orphaned children.

Bikers who work for the benefit of others

Bengaluru-based Bros on Wheels is a community of over 60 bikers, who formed the group on June 21, 2018, which also happens to be World Motorcycle Day.

The month of November is huge for the community, when they religiously follow the ‘No Shave November’ rule. But beyond the unkempt beards, members pool in all the money they save on grooming and set it aside for a cause. This is not just limited to only members of the group, but also others who have dropped the razors as well.

“Once we collect the money that comes in through these donations, we donate it to an institution working to help cancer patients,” says Sujith.

An animal lover on a mission

For Anushree Thammanna, animals are more than just pets; she firmly believes in ‘Adopt, don’t shop’.

She runs a small business called ‘Crazy Dog Lady Projects’, an online platform that sells handmade articles. A part of the profits goes into animal rescues and local animal shelters. She is also now on the road to becoming a canine behaviourist.

In a tête-a-tête with SocialStory, Anushree shares her journey with dogs, how she runs her business single-handedly, and the challenges she had to overcome.

Tête-à-tête with L&T’s AM Naik

AM Naik, Group Chairman, Larsen & Toubro, says his family has a long tradition of service to the nation and the community. The tragic death of his granddaughter Nirali in 2007 that led to the creation of the Nirali Memorial Trust in 2009.

The Naik Charitable Trust has set up a skill-building centre in Kharel, which offers basic skill training in nine trades for boys and girls.

Speaking to SocialStory, AM Naik talks about what inspired him to serve others and how concern must be translated into action, and action into results.