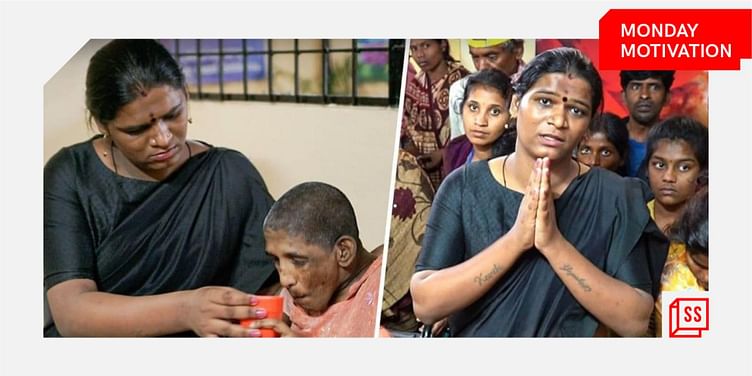 Nakshatra, a transwoman, started NGO Nammane Summane to support the community members and other homeless people by offering food, education, and shelter.

Being disowned and thrown out of her house by her parents at the age of 16 for being a transwoman, Nakshatra knows how hard it is to be on the streets.

In 2017, she left her home in Gulbarga, Karnataka, and came to Bengaluru hoping to find better opportunities. After spending almost three months on the streets, Nakshatra joined the transgender community. However, in the process, she also realised that the transgender community members lacked knowledge as all they knew was begging or prostitution.

But Nakshatra also had to resort to begging as she had no other option. However, this was not the life she wanted for herself. She slowly started saving money for her education.

Once she was able to stand on her own feet, Nakshatra started Nammane Summane, an NGO to help the homeless, in 2020. Based in Bengaluru, it offers shelter to LGBTQIA+ individuals, orphans, persons living with HIV, differently-abled people, senior citizens, and anyone else in need. Nakshatra terms it as the ‘a refuge for people refused by the society’.

According to Nakshatra, this is the first shelter started by a transwoman for the orphaned and homeless transwomen in India.

Recalling her days on the streets, Nakshatra explains how she observed other abandoned people on the streets who were trying hard to make a living.

“I spent two months sleeping on footpaths, eating food that was thrown away, taking bath in public washrooms, and taking shelter under cardboard boxes. I’ve seen it all. I know what it feels like to have no family, home, security, or even a handful of rice,” she says.

“When I was sleeping on the streets, no one helped me. When your family abandons you, you lose the hope to even ask for help. I didn’t want anyone to feel this way. Nammane Summane is a safe and secure home for everyone in need, irrespective of age, religion or gender,” she adds.

As soon as Nakshatra and her team of volunteers get calls from the needy, they immediately go to their rescue and help them with food, clothes, and other essentials.

“At Nammane Summane, we provide beds, three meals a day, education for young children, necessary medication and counselling for people who have been rescued from the streets and who are facing tough times,” says Nakshatra.

At present, the shelter home caters to 80 people.

Even before the NGO was registered, Nakshatra faced several hurdles and discrimination due to the stigma attached to the transgender community. Once they were able to begin, the Covid lockdown set them back.

“The COVID-19 pandemic hit the middle-class people and the poor largely. For people in the LGBTQ+ community, getting through the day was tough. People had no financial or emotional support from their families. My community was suffering immensely and I wanted to help them,” adds Nakshatra.

However, she recalls the time of setting up the shelter home. People had refused to offer her space initially and called her a beggar and sex worker. After struggling for months, she was finally offered a place by a lady at Gangondanahalli in Bengaluru.

During this time, Nakshatra pledged all her jewelry and used her savings to run the NGO. Since then, the place has been self-funded - solely dependent on the donations from individuals and organisations.

“We couldn’t even feed the people we were taking care of. Even rice, oil, and dal were difficult to come by. I’ve put everything I had into this NGO. But we still struggle to arrange money in order to continue our work. I don’t want this to be the end of the road for my project,” she says.

Nakshatra’s sheer will and determination got her through difficult times and start an NGO. She now wants to continue running Nammane Summane serving more people and does not want anyone to be stranded on the streets like her.

Fixing the Agricultural Supply Chain from the Top and Bottom