[Queer Changemakers] On being a queer teen in India 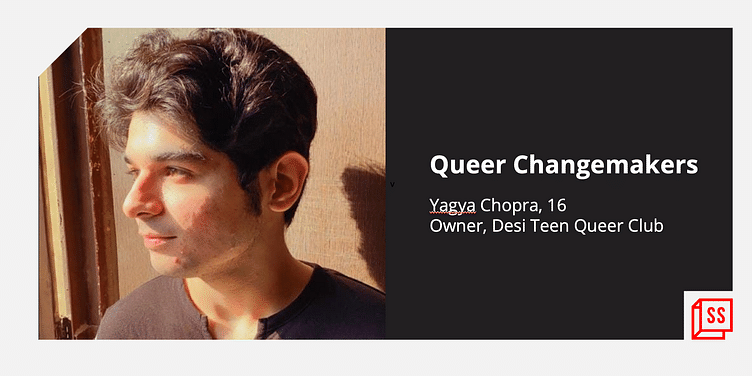 'Finding a place to fit in is hard. Making friends with whom you can be your authentic self is extremely difficult. It’s hard for queer teens to break the social conditioning,' says teenager Yagya Chopra.

Being locked in the house for about two years, I have explored a lot about myself and the people around me. Lockdown was a break from the fast-paced world, where I could see the people and their opinions from a different perspective. The world of technology enabled me to connect with like-minded people from all around the world, with whom I could share my experiences without any hesitation of being judged.

I am Yagya Chopra, a 16-year-old from Delhi NCR, who is still figuring himself out and trying to find his place in the world. I identify as a ‘queer’, which literally means different. Accustomed to being primarily around adults, I have often been told that I am mature for my age. I was never the sports kinda guy, and always stood out from the other boys my age. Being an anomaly is an overwhelming experience, that’s why I like to call myself queer. Being a queer teen is not easy. It’s overwhelming, hard, complex and sometimes exciting. You are always pointed out even if you don’t want it.

Finding a place to fit in is hard. Making friends with whom you can be your authentic self is extremely difficult. It’s hard for queer teens to break the social conditioning as the lives of teens in some parts of the country are already decided by their elders or the society, which doesn’t give them the right to be themselves. Sometimes due to heinous taunts of other members of the society, we have to think twice about our orientation as they try to show us a mirror as if they are the paragon of virtue.

Being a teenager in itself is very hard because we are constantly trying to find ourselves in this world. The mental and physical variation in teens is a difficult stage during puberty, as it becomes hard to manage emotional intelligence.

Queer teens even face certain challenges within the community. Sometimes people can be judgmental about their preferences, looks, gestures, and actions, which might scar their self-confidence. Some even try to mislead teenagers as they are very new to the community. Some people don’t let them come out of the closet by telling them pointless consequences, which makes them self-doubt and feel demotivated.

This can have a big impact on a teen’s life as it can scar their mental health; make them feel lonely and bad about themself. Some queer adults project their dark or hurtful past by sharing their coming out stories, which can make the teens feel insecure and worried, which might lead to depression or self-harm. Sometimes, listening to these stories might benefit too.

In my experience, when I talk to queer adults or queer people around my age, I get to learn so much from their circumstances; it has taught me the dos and the don’ts of coming out. It has also helped me to learn about the different ideologies, opinions, and how to tackle people with different mindsets. It’s important to have queer idols and icons, especially in South Asia, to whom the young queer population can look up to.

We do have queer idols but only a handful of them. It’s hard for some teens to find support within the community as many are closeted and their identities anonymous. The only social gatherings to make 'acquaintances' from the community are the pride events, the scope of which is very limited for someone living remote from the happening cities.

That’s where social media comes in. I have a million online friends who make me feel less lonely and I feel like I belong somewhere. Thanks to Uable, I get to meet like-minded teens from all around the globe and now we have finally opened a Desi Teen Queer club. Social media helped me a lot in socialising and making friends. Social media has benefited millions of closeted or introverted teens to express themselves without being judged.

It gives us the power to make exclusive friend groups and also the power to moderate it! We have more than 150 members in our club right now and it’s beautiful to see how platforms like Uable and Instagram have connected people from all around the world at the reach of our fingertips. The best part about Uable is that it’s specialised for teenagers where we can find our gang and when we don’t, we can create one by initiating a dialogue or a post, or by participating in challenges. And now with the new update, we can even open our own club!

Creating a safe and free environment is important for a teen’s development. It’s crucial we stand together, and make everyone feel like they belong somewhere and not outcastes.

Though...being an anomaly gave me a unique view of the crowd.